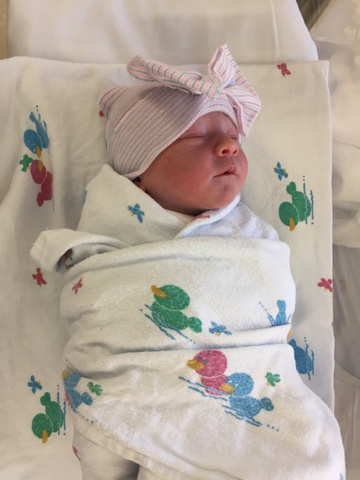 Clare Cecilia was born on Saturday afternoon after what seemed like a never ending start to the labor process. We got to the hospital at 5:45 - 5:30 was just way too early. They got all my info and pitocin was started at 7. The hospital policy is to not allow moms to walk when on pitocin because they have to be hooked up to the fetal heart rate monitor. Okay fine. So until my doctor broke my water at 10:30 or so I did get a few hours of standing up by the monitor time because those hospital beds are for the birds.

Anyways so it seemed as if zero was happening and at noon at 4. I was pretty sure that I was going to have to have c-section because this was going no where and it was taking forever. I really thought I'd be snuggling a baby by lunch. So 1:30 rolls around and contractions are getting stronger so I hit the Stadol please button - even though I was really hoping to not go that route.

Then of course things get a little hazy because well, that what Stadol does. The nurse asked if I wanted the full or half dose because it stays with you for about 2 hours and I told her I'd gotten 2 doses with the other kids so we were figuring at least 2-4 hours before baby was born. Well baby had other plans. The heart rate was dropping with each contraction and the nurse had me change positions a few times on the bed and finally I they gave me oxygen and put the bed in a recliner like position - fancy-shamancy-uncomfortable bed.

I remember begging Lee to get the nurses because I was ready and he said they were coming and then the next thing I remember is the nurse saying - So I guess you aren't waiting for the doctor. Yeah no, I told her well before my pre-medicated state I was NOT WAITING so she took my words to heart and delivered the baby a minute or two before the doctor came. Lee swears it was only about 5 minutes in between the nurse paging him and birth.

I remember them saying she was a girl and I ripped off that crazy oxygen mask. The other L&D nurse was there and the nursery nurse - at some point before she was born one nurse called that - there was a woman without an epidural having a baby and she needed some back up - I think that was probably L&D nurse #2 asking the postpartum nurses to come to L&D nurses station. The doctor came in just in time to see Clare weighed. I think he was more than a bit perturbed at not being there but not my problem : )

The room cleared out soon enough - Clare was not nearly as loud and scream-y as A was so that was pleasant relief. Now, if you were to ask Lee how all this played out he might have a different story and certainly a different perspective. Something about this labor and delivery was different and effected him in a much different way and maybe one day he'll be able to articulate it... 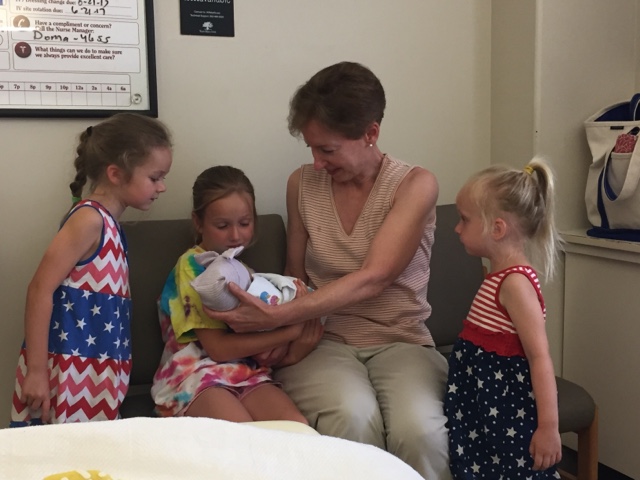 So everyone found out that there was a new girl in the fam. There was no disappointment or tears that she wasn't a he. I really believe that A is an anomaly so he'll remain king of the castle for now. Speaking of which - he wouldn't sit with me or look at me or anything at the hospital - which kind of hurt my feelings a little bit but he likes me now that we are home.

The rest of the hospital stay was generally uneventful... 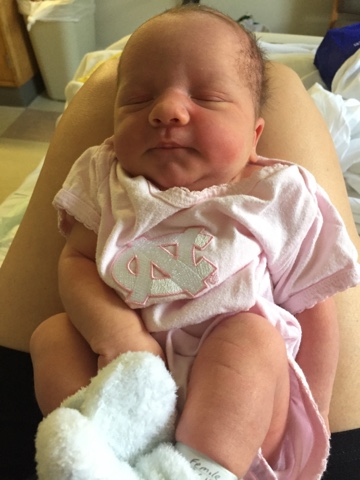 The food was the pits and the kitchen closes at like 4:45 on Saturday afternoons so graham crackers it was for my midnight snacks. I had to wait for what seemed like forever for my enormous IV needle to be taken out. I did have an endless supply of water and Coke after not getting one immediately after C was born... Next time, I'm going to have the L&D nurse set up a water bottle in the corner for me because seriously I was so freaking thirsty and this is the second delivery I have had to wait forever (10 minutes?) for some water.

Lee and the kids took to church Sunday morning and C and I hung out at the hospital with a good friend and way-better-than-this-hospital food. Then Lee came to collect us and bring us home.

Obviously none of this would have been possible without some serious help... my parents and Jibbe and Aunt Mary all came to our house and corralled the kids while we were at the hospital plus cleaned plus cooked. We are so grateful and very spoiled. 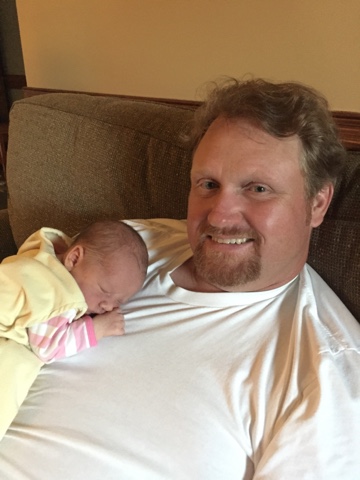 And C's first week at home would not have been possible without family and friends checking in on us, bringing us dinner (and C scored some cute outfits), helping cart kids here, there and everywhere.

Also this week our summer sitter started - which has been awesome. She's here in the mornings and not having to worry about entertaining the big kids has been most excellent. I got a morning nap in, C and I got to go to our nursing mother's group meeting (so much more I want to say about breastfeeding support but that's for another day), C went to the doctor twice - all sans big kids. And while I won't disclose when I'm going back to work - because I think it makes people nervous for me - the kids hit a home run with this sitter so they should have a pretty fantastic summer.

Now, onto other particulars... 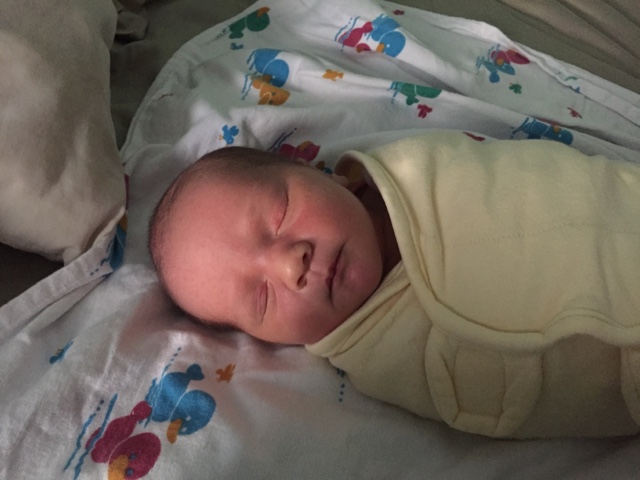 What's the deal with her name?

There's no Clare's in our families - and probably the only connection that is worth mentioning is that Uncle Kev would have been Aunt Clare but he's not - thank the Lord.

So she's just named after two saints. Just two saints. St. Clare of Assisi founded the religious order - the Poor Clares and was inspired by St. Francis of Assisi. St. Cecilia is the patron saint of musicians and has a crazy story that is worth reading and was the first incorrupt saint.

And now that we have a girl with a C name - for anyone interested - A would have been Catherine Clare had he been a she.

C is a seemingly good sleeper and eater - though I am not 100% convinced that she won't need her tongue clipped like big brother. 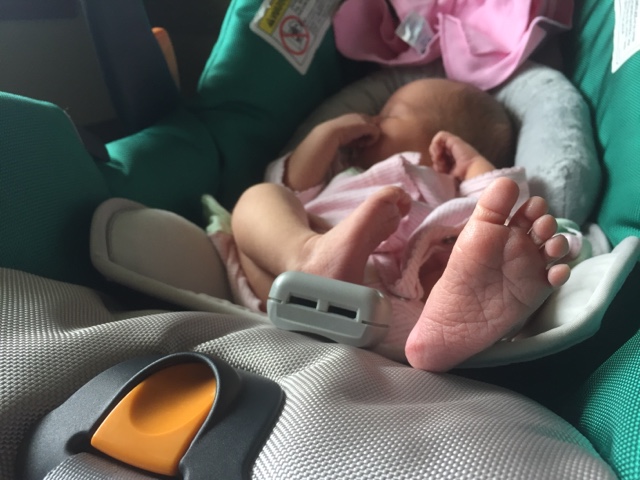 I think her most striking feature to me is that her feet seem enormous - even though they clearly aren't.

The big siblings are still pretty indifferent about her and it surprises me they don't ask to hold her more or pick out her clothes. A likes to poke her head and is an excellent dirty diaper tosser... except Papa found one in the toilet this afternoon. 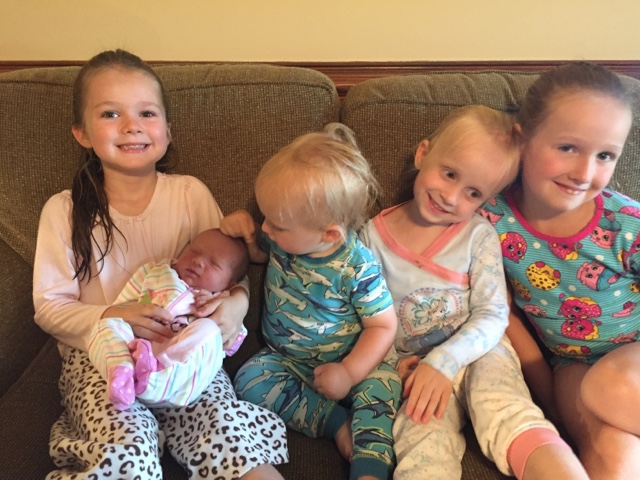 And so after just over 168 hours of life in the ex-utero side of the world she's being absorbed into love, into the crazy, into the the everything that is our family. So little C, you're a keeper. We like you. We love you. We hope you feel the same way because there aren't any refunds
at June 24, 2017