Picking up where we left off... somewhere in between crazy and insanity just in time for a Memorial Day weekend break.

Seeing that it was Memorial Day weekend it is worth pointing out that the big kids realize that - hey something is different because it is Monday and we don't have school. So R asked what Memorial Day was? E responded that it is when we remember all the people who died in war. R needing clarification asked if everyone died on the same day. And E said no its just we remember everyone on Memorial Day but they died at different time.

If kids don't understand this they ought to. We live in a crazy world but in a country where we have freedoms and rights and we can never forget those people who lost their lives to preserve and protect our freedom. 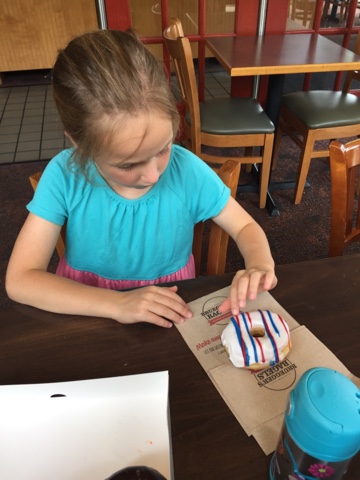 We had to run an errand after church which included a stop at donuts and bagels. E got the last RW&B donut and the shop pretty much closes up when they totally run out - so there's no let's wait 5 minutes so they can get more out of the back. 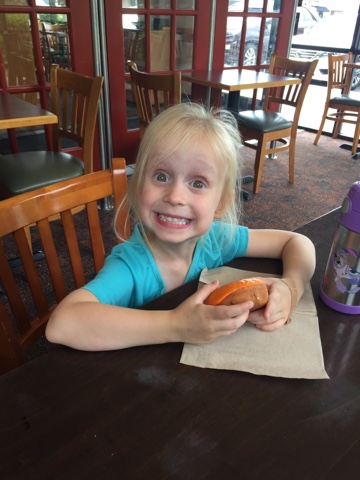 M settled on an orange donut which I never got a taste of but she liked it so whatever. 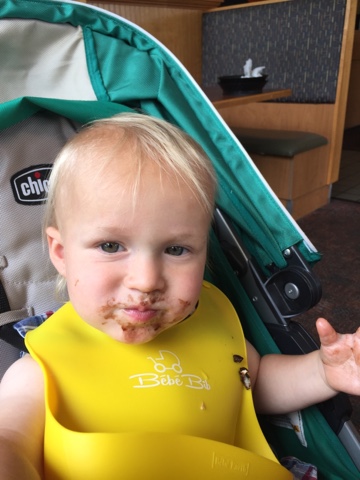 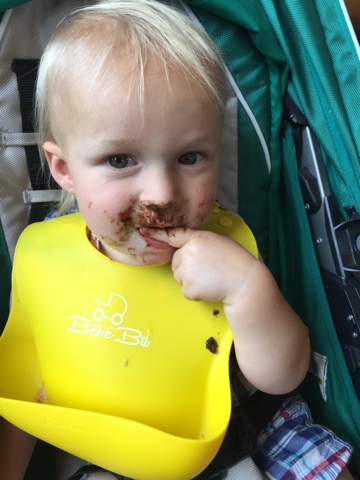 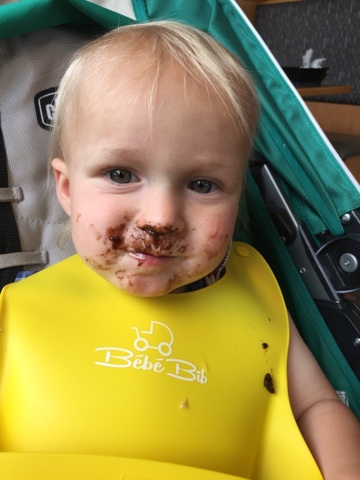 R was with us but was not a donut recipient because when I tell you you'd better shape up in church so that you can earn your donut and then you retort back that you don't want a donut... then guess what... NO DONUT. R has a habit of saying things that she really doesn't mean - I think just to see what I'll do so now I'm holding her to more of the things that she says and I'm hoping she gets the point.

Which is completely different than M who says things and means them. Example. Yesterday she was eating a hotdog for lunch and she got up and said - I don't want my dessert. and I look over at her plate and there's half a hotdog left. So I tell her fine and then dessert time rolls around and she proudly will announce that she isn't getting her dessert.

On Memorial Day we all put on our Red White and Blue... 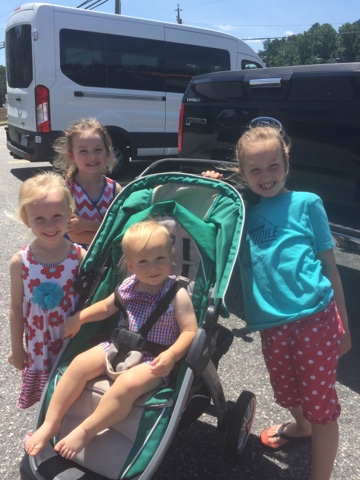 And headed out to celebrate an AR point milestone for E. I told her she could get another set of books or go out for ice cream or snow-balls. This time she picked sno-balls (last time she picked books) 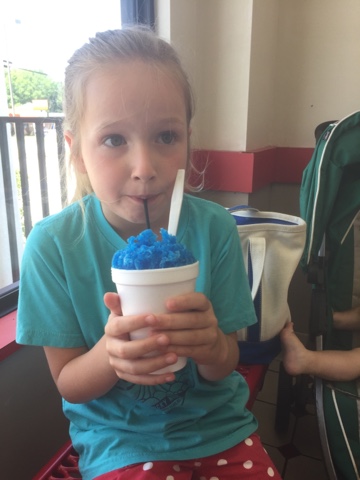 Cotton Candy I want to say 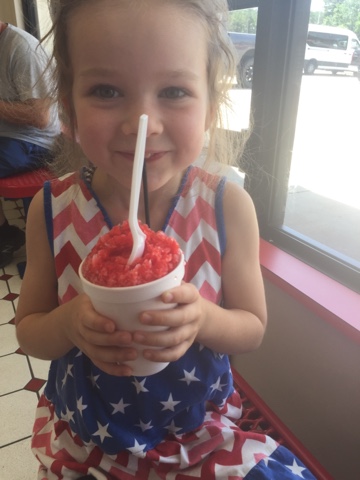 Strawberry (with the big van photobombing) 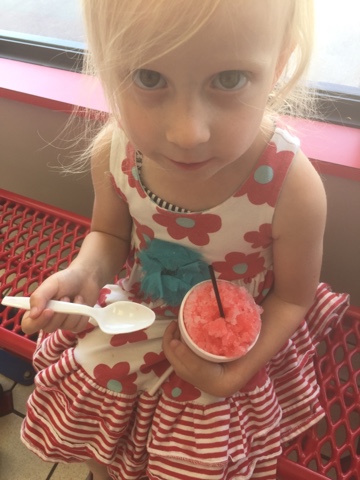 Pink something that got a thumbs down from me 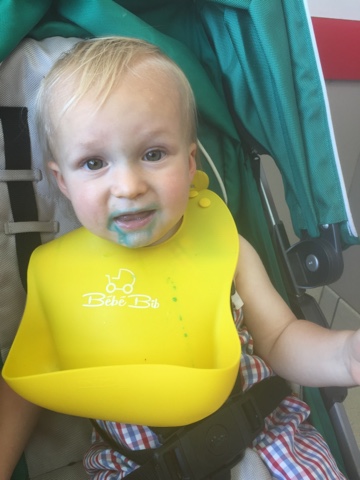 I shared my Blue Raspberry with A and Papa did NOT share his Cherry with him. Coincidentally we all ended up with blue and red flavors which makes my OCD self very happy. 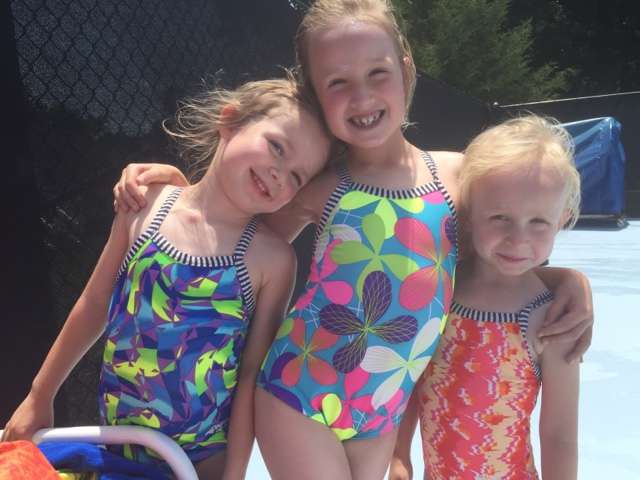 Then the girls and I headed to the pool for opening weekend and it was pretty much swamped. I think R might give swimming a run for its money this year because if she really wants to - I think she could do it. M is way more nervous than I remember her last year

Then it was back to the normal... 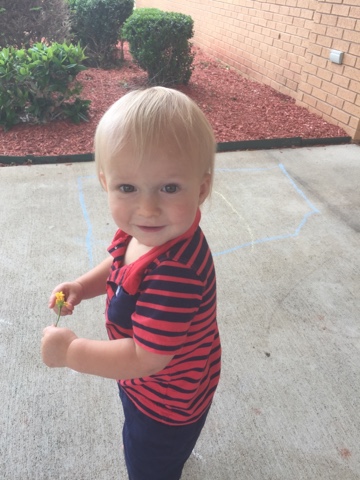 A came bounding out of school one day but then when back to the stroller to grab a flower and I thought he was going to give it to me but then he didn't and plucked it apart in the car. Next time I'll be sure not to get my hopes up.

This week was our End of Year Week... 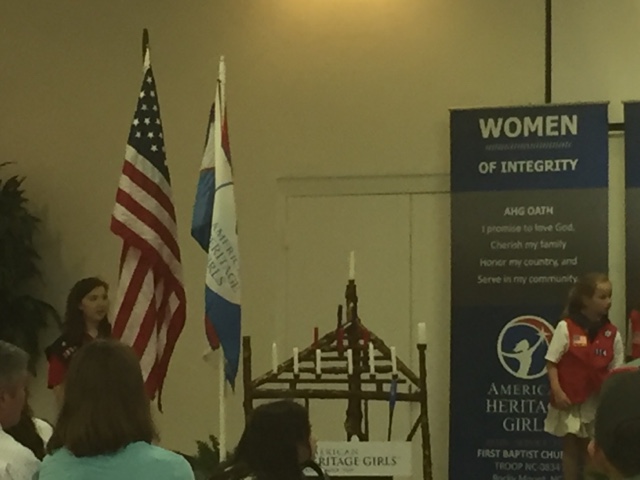 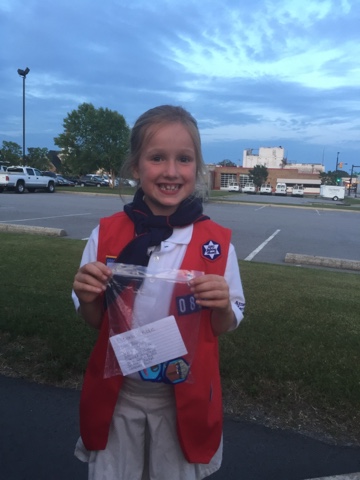 E earned 9 badges and has high hopes of earning a lot more in the next 2 years she's still a Tenderheart plus some service stars so she's devising ways to rack up some service hours. 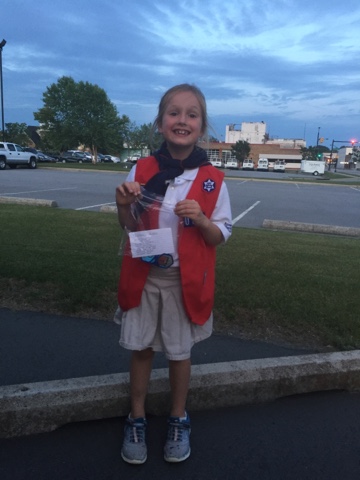 I'm so glad we've found a program that is Christ-centered and lifeskill building that she enjoys. For comparisons sake... Last year she had a few more teeth I think. E's already talking about R joining in the fall and cannot wait to show her the ropes 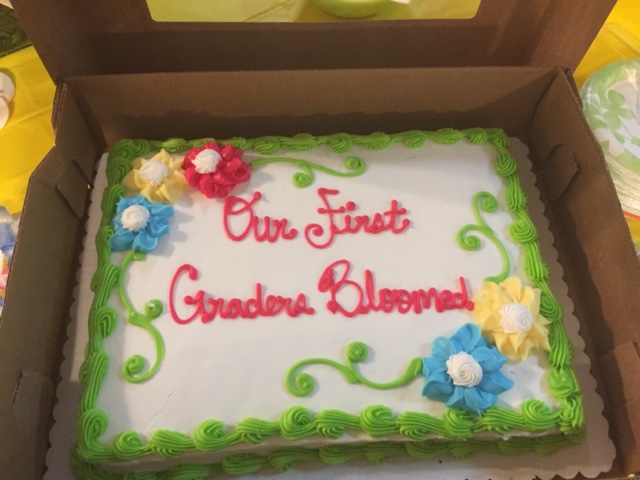 I love our school, I love our class of kids and parents and we had a pretty rockstar of a teacher this year so it will be hard to close this 1st grade chapter for E. 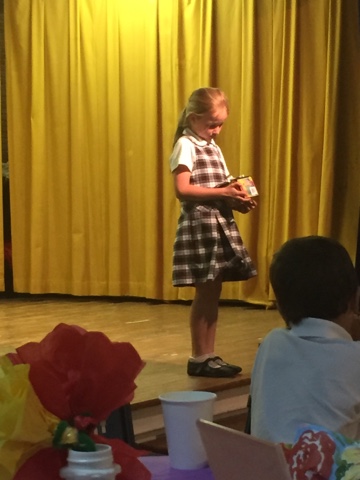 Each child was awarded a candy that the teacher said exemplified them. E got a SKOR bar which I've not heard of or tried. 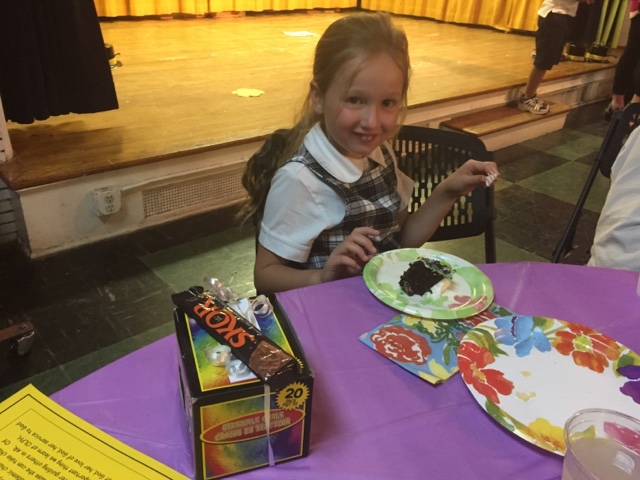 She got an AR award too but was way more interested in the cake than anything else.

After the program and after a quick nap for A we headed out to the pool despite the kitchen being a disaster area (one of the benefits - seeing the positive - about Lee working until dusk is that I can bank on him NOT coming home to find the kitchen a wreck. Call it his thing, but he thinks if you are going to play then the mess should be cleaned up; clearly we don't agree so during pool season I can clean up the kitchen at 7:30 and still be 'safe' ; ) 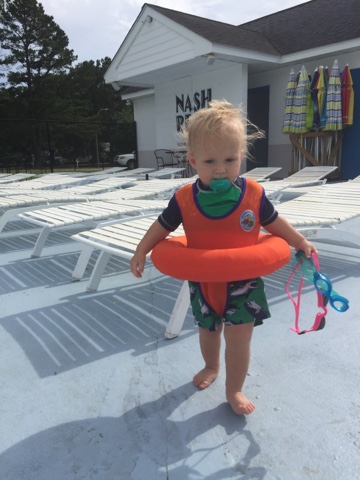 A will be living in this lovely apparatus for the summer. He fought me hard on it and continued the screamfest for a while be - ASK ME IF I CARE. 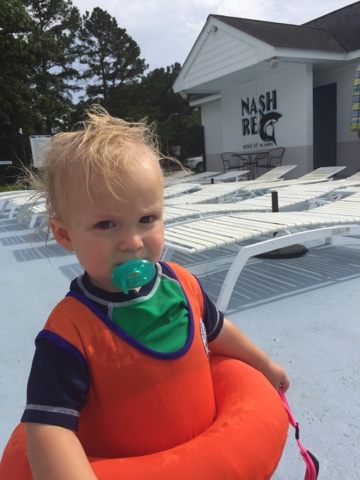 'Mom, this is totally not cool'

Anyways he got over it at some point and ventured to the pool steps and had a nominal amount of fun. M got in the water more than Monday probably because there were way fewer people. R melted down a bunch because it was a late night at AHG plus no rest. E was generally annoyed that there were more people to play with. But whatever.... 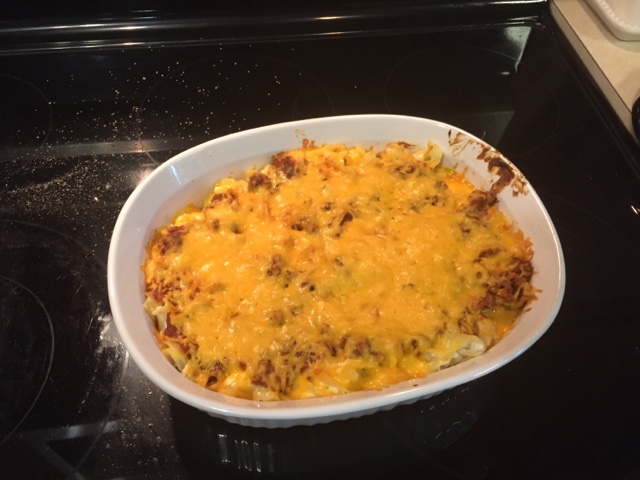 I tried a new recipe for dinner and the kids didn't turn up their noses and Lee actually ate it - not that he gave it raving reviews - but I think it might get put in rotation with a few tweaks.

Our hang up clothes are probably the most telling of our transition... Transition from spring to summer.... 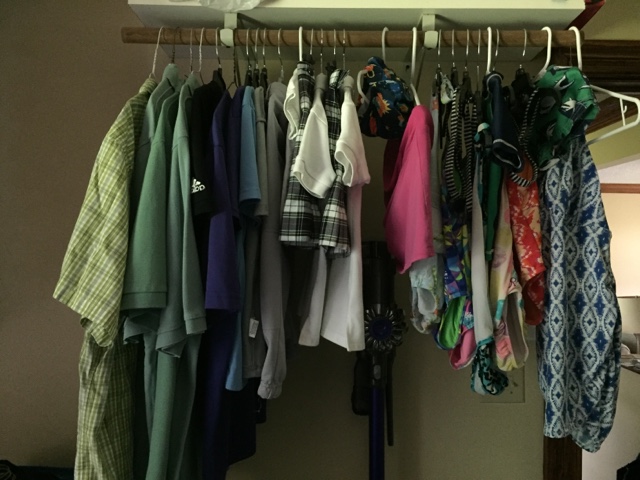 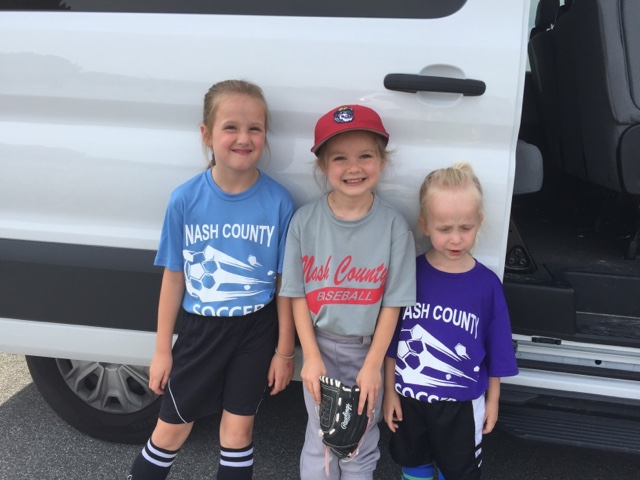 Last night capped off the spring sports madness with 3 games in one night (at the same park). I basically read Lee the riot act and told him I needed him at the park at 5:45 or else. R had a tee ball game at 6. M had a soccer game at 6 - which I had to coach and E had a soccer game at 7:30 and A is a loony tune. Papa came through for us even though we probably won't see him until 8 or 9 Friday and Saturday because of it. 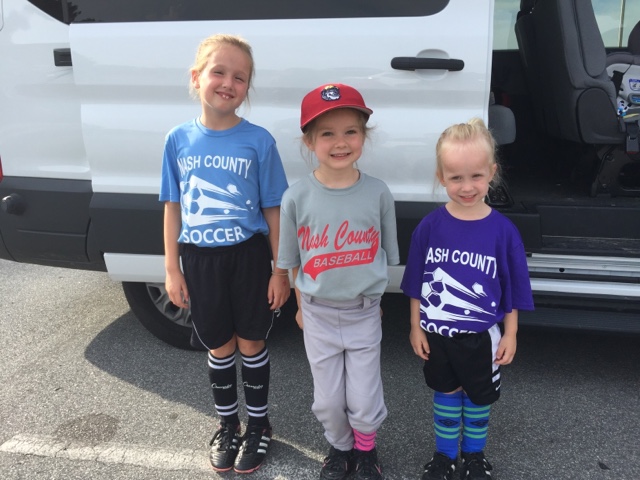 E and R still have games left tomorrow but those are in the morning and totally manageable. Here's to getting through our spring sports activities.
at June 02, 2017