Spring Sports seemed like a lifetime ago even though they wrapped up not too too long ago.... 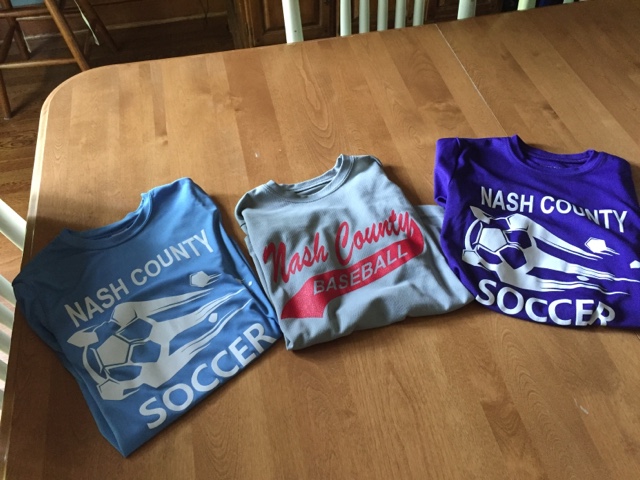 E played soccer after taking a break from it in the fall (for swimming). She really benefited from being able to run around for awhile without getting exhausted. The fields are pretty big and there's only 5 players on the field - including the goalie. She liked playing goalie but her team really needed her running in the mid-field (if you can call it that). Her coach was great. He had was really great with the girls and they all definitely learned as they went. I cannot say that I saw huge leaps and bounds of improvement but she did score a few goals and had fun so what more can I say?

R played round two of tee ball. The coach and a core group of kids were from the fall team - yay! - so I think that helped a lot with not starting from scratch with drills and expectations. She definitely got better as the season progressed and she even hit it to the grass - which was her goal that we set from last season. She hit it on the last hit of the last game. It was pretty neat. We had said that means she could get the bat of her choice BUT as soon as we got in the car she announced that she did not want to play tee ball in the fall and she was switching to soccer?!?!?!?! Sigh. I have heard her wavering on what she wants to play so maybe it will be back to the baseball diamond for her in the fall?

M played soccer again. Thank goodness for 20-25 minute practices and games. She did great in practice but clammed up during the games and decided she wanted to sit out more than play - probably because I had an overabundance of snacks for A. I think she could do really well in the fall but I really need to talk it up with her. I don't know how much Lee not being able to make it to the games made a difference but maybe it did. He came to her last game but by that time she was pretty much checked out of soccer - along with most of her other 3 yr old counterparts.

I coached M's team because I enjoy it. I will say it was super hard not having Lee there to help keep everyone in line - the team parents were great but it's different when Papa is there and can actually tell our kids to stop acting like crazies. : )

It was actually a really long sports season with Lee's work schedule. After Pascha, insanity broke loose and all the carting around was on MOI - which is totally fine, just exhausting. We really want to give our kids experiences of playing sports (amongst other things) and pool season just happens to ramp up in the middle of one. So everyone got schooled in patience and sacrificing this spring all while having (more than) a little fun.

Email ThisBlogThis!Share to TwitterShare to FacebookShare to Pinterest
Labels: batter up, soccer, things i think