It's been almost four months since we traded our minivan for the minibus or microbus (for anyone who may get that reference)... The Transitasaurs is our now family car and if you are in the market for a larger-than-life family car here's what I think... 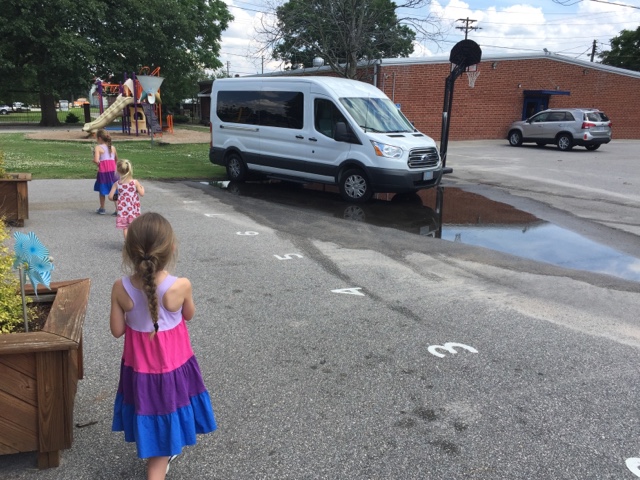 Why did I park in a puddle? To try and keep A out and that worked up until the moment we had to leave...

There's lots that I really appreciate about the Transit. Everyone (five kids) has a little elbow room. Everyone is still in a carseat (E is in a Britax Frontier functioning as a highback booster). I can actually help with carpool. I took E and a few of her friends to camp one morning and I didn't have to pull out a million carseats to seat the older girls (because the littles were still at home) - installing and moving carseats is kind of a pain. I really like having extra seats to help out because friends help us with shuffling kids around OFTEN and it is better to give than receive and we are on the receiving end a lot! 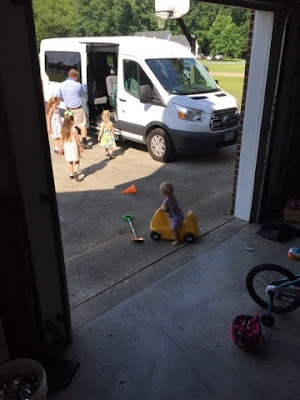 It drives nicely. You are up really high which is great. The mirrors are A+ so changing lanes takes some getting used to. I will say the gas mileage isn't amazing but better than I expected. I've seen it as high as nearly 16 and averages about 14 - with BOTH city and highway driving. The sticker stated 11 city and 14 highway. 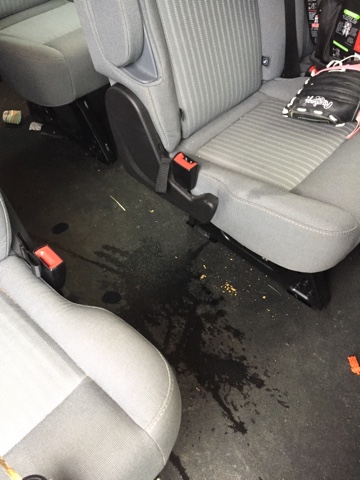 Another huge plus is that there is an aisle (if you will). The older conversion vans are straight benches. I like the aisle pass through but more than that - there is separation of seats sooooo.... less chance for fighting/arguing. Also, the Transit is quite industrial/utilitarian. No carpet floors = spilling water/crumbs isn't getting ground into the carpet since the floor is hard plastic 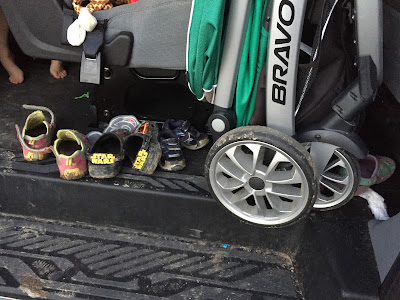 I do TRY and keep the dirt to a minimum though. As of now we store the stroller behind the passenger seat / right in front of the infant bucket. That was a major annoyance is that there were only 2 LATCH clips so it was either infant bucket all the way on the window side (which would require lots of reaching and me sliding in and out of the row) OR right by the door. No middle seat LATCH. Which wouldn't have been a big deal but the stroller is perfect behind the passenger seat because there is ZERO space in the back for cargo. 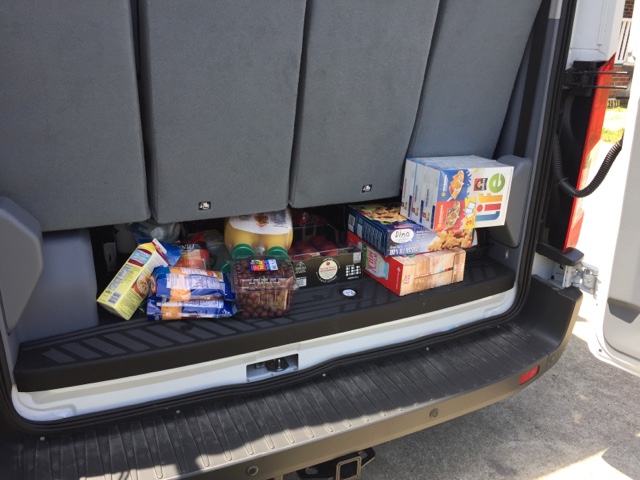 There is just about

this much space in between the door in the fourth row of seats. Yes we can unbolt some or all of the fourth row - and probably should but we seem to be getting along MOSTLY fine as is. 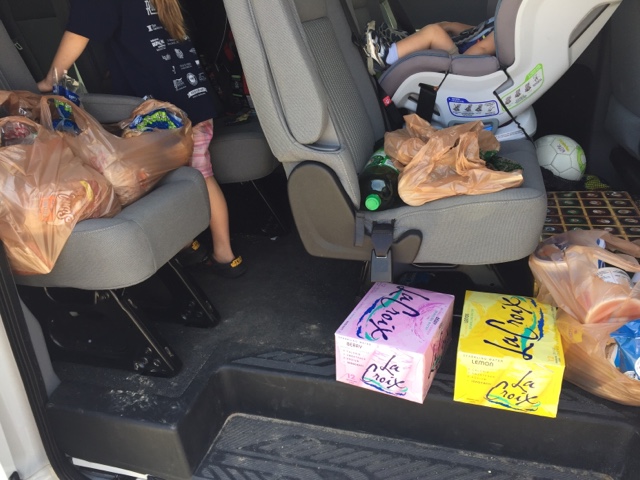 So I resort to grocery stowage on the floor, between rows and in the seats next to the kids - not a huge deal. It just makes loading up alittle interesting and kind of puzzle like at time 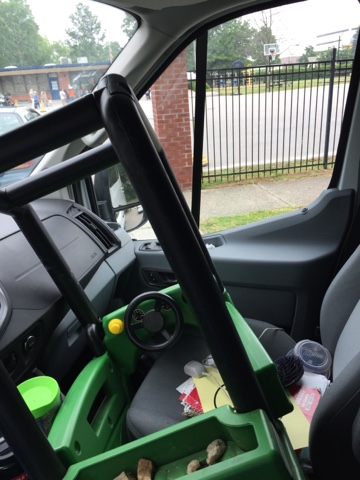 Bulky items get a front row seat. There is no center console in the front which isn't terrible. I have a trash bag hanging on the gear shifter-thinger - which Lee doesn't love but I tell him that it's better than trash being everywhere in the front - which was the case in the mini. Also no center console means I can easily step and reach the first (and other rows) - when I'm not actually driving - maybe if it's raining.

I did manage to get locked out of the van once. When we were in the driveway and I had cranked the van to get the air going but fortunately E was in the van and I got her to unlock it and we were at home so I could have gone in and gotten the spare key. I have been much more vigilant about doors since then.

Speaking of doors, the sliding door is not an auto sliding door which might be the single biggest thing I miss about the minivan. The door is heavy and locks into position when fully opened so it is really hard for E and R to open and close plus it makes me nervous with little fingers. There is an option to have an auto sliding function put in for a mere $2500! So maybe when we pay it off that can be put on? I really do like the ability to motivate my slow movers out the door by forcing them to chase the van/bus up the street to school/practice. Now I have to get out of the van to close the door for the feet draggers - which is fine but I'm usually annoyed to begin with soooooo.... yeah, miss the auto slide.

Speaking of leaving the house, our minibus is a midroof height. So I can stand up completely = awesome. BUT it does not fit in the garage : (
Which is very : ( on rainy days.
And we haven't had the van during cold weather so that will also receive a : (

My two biggest issues are #firstworldproblems so I'll stop right about now : )
at July 18, 2017

Email ThisBlogThis!Share to TwitterShare to FacebookShare to Pinterest
Labels: things i think, transitasaurs