We're Going to Ride Bikes in the Morning

A few weeks ago our neighbors moved. Like the ones I have raved about because we live in a great neighborhood with awesome neighbors who take A to visit their chickens and then inside for snacks and dinner, who take the big girls to the pool just because, who come over and hang out and chat about all things life. 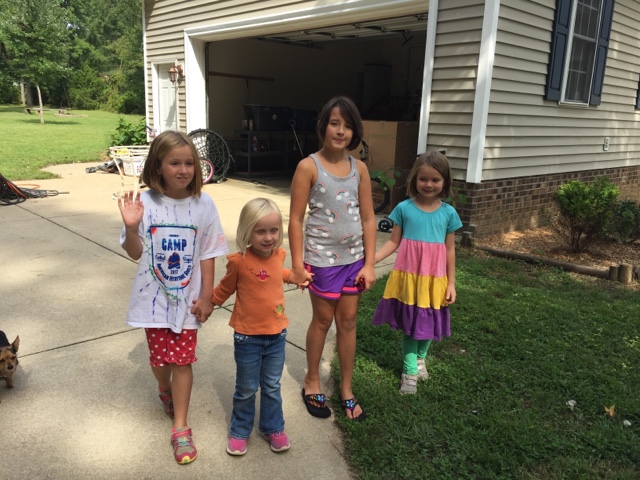 Ever since there was an inkling of a possibility of them moving I shoved it to the back of my head and didn't want to think about it because well who wants to think about stuff like that.

Well the move became a reality and it really made sense for them.

I cried. I cried alot and have cried more over them moving then I ever could have imagined.

Growing up none of my good friends moved. And when I went to college everyone was moving and going in a million directions so it didn't seem weird or sad - it was normal.

Now I am a creature of habit and I despise change. If everyone could stay put exactly where they are and if I could move a few friends into Rocky Top my circle of neighbors and friends would be over the top amazing. But that's not going to happen.

But that all changed.

I distinctly remember the first time we saw our neighbors when they moved into their house just 3 short years ago. Lee and I were out on the porch one July evening, drinking wine and chatting as we watched this massive truck pull up to the house with the realtor. We sat and wondered amongst ourselves who were these people? and what were they like? and please please please LET THEM HAVE KIDS! (the girl pickings were pretty slim at the time and we still love out neighbors up the street - you know who you are if you are reading this and PLEASE don't ever move because M would be lost without AB)

Well as it turns out our new across the street neighbors did have kids - 2 in fact. A boy to play with the up the street neighbors and a girl to play with our girls. Quickly the girls became great friends and I used to joke that I had five kids (when I had four) and six kids (when I had five) because their friend 'lived at our house'. Probably because my girls have an unhealthy fear of dogs. But also when I grew up, I used to 'live' over at my best friend's house and I was affectionately known at the fourth child. Our girls played for hours together whether it was Barbies or Legos or family or dress up or whatever; it didn't matter as long as they were together. They had a ball swimming at the pool and tons of fun sledding in the snow. One night this past summer I let E ride up the big hill on her bike with her friend - kind of a big deal because she can't go past the stop sign. But that Sunday night they rode until it was dark. The next morning they were out riding again by 8.

Not more than a few weeks after that night the move became a reality. E didn't want to talk about it. I didn't want to think about it. Unfortunately that didn't stop the moving truck from coming. We had dinner a few more times together and lots and lots of playing. The afternoon before their departure E stayed home from M's soccer practice so they could play as long as humanly possible. When I got home I asked if she said bye to her friend. She said as a very matter-a-factly, "No, we're going to ride bikes in the morning".

Never mind that tomorrow was a school day.

Never mind that the bikes were loaded in the moving van.

Never mind it all because saying good-bye stinks.

Let's just relive the best moment of the summer one last time.

The next morning came without a bike ride. We said goodbye before school that day because they'd be leaving mid-morning.

IT WAS SO HARD.

Fortunately we were on our normal time crunch so there wasn't lingering with stories and tears.

When the preschoolers and I got back home for lunch they were still there! My heart was saying "Oh thank goodness, they've changed their minds and decided to stay". My mind knew better. If you've ever moved you know cleaning always takes way longer than you anticipate. M had one last lunch with her friend and then it was really time for them to load up. Our up the street neighbors came down for ONE LAST GOODBYE. I was sitting on the front porch feeding C and M dutifully waved them off. And then that was it. They moved and we will forever miss them.
at October 20, 2017