Here's to the final night of the Odd Squad... (for a bit). Here's what they are up to 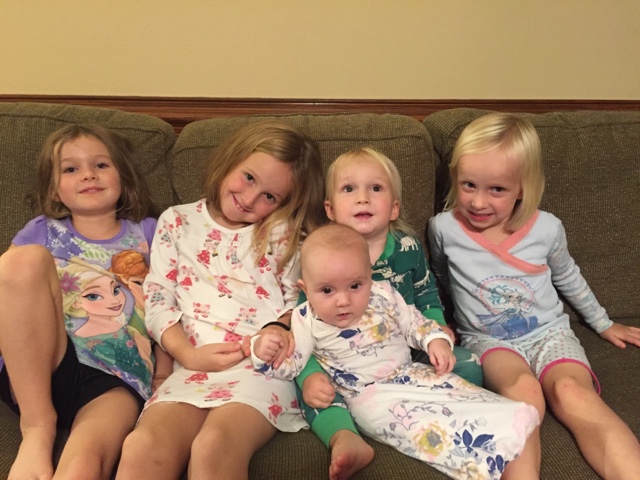 R - 5 - She is rocking Kindergarten. She has made some good friends in her 'new' school. She's got a good class of kids and I love that she loves her school and her friends. Her handwriting is still improving and she's powering through her sight words. Tee ball is her sport of choice is she is making HUGE strides in hitting off a pitch.

E - 7 - Second grade? E is getting into the groove. The first few weeks of second grade were kind of a bear (maybe more for me than her). She loves to read. LOVES TO READ. She can get so into a book. She's swimming year round again for the second year and doing well. Still working some kinks out of breaststroke, I believe she can do it but she might tell you otherwise.

C - 3 months - She's talking up a storm and loves to chat it up when I change her diaper and enjoys looking at herself in the mirror. I really need to move her into her crib for the night because I think we are keeping each other up at night. She's still coming to work with me and Papa has not attempted any sort of bottle with her soooooo, I'm never too far away.

A - 1 and/or 23 months - AAK (get that)! How. Is. It. Possible. A is turning 2 tomorrow. He is all boy. He loves to lay in the dirt and play outside. He is still in the very clingy mom stage during the day - especially when I drop him at school and in the afternoons. He HATES to wear shoes and has the saddest looking feet with splinters, ant bites and scrapes - but he wouldn't have it any other way.

M - 3 - This girl will be 4 in a month. Also, insane. She is loving her 3 yr old class and has some really great friends. She is mischievous and devious and calculating and cute all at the same time. M prefers playing with the big girls but can be caught playing with A after lunch because sisters are at school. She's a mess and she's got everyone fooled by her cuteness. She played soccer for her third season and did leaps and bounds better (comparatively, but we aren't supposed to do that, right) than her big sisters. We owe her a celebratory trip to Pit Stop and probably a few extra topping because of her season performance : ) I think M is a little E with some third child swagger.

It is kind of weird dynamics we have going on right now. I think that E, R and M are their own little dynamic in the family. E is definitely the oldest. R is the forgotten middle child who is harassed by the oldest and the youngest (M). I try not to forget her but it is hard because I think of her more like E and she's not as small as M - it is easy to forget she demands her own standards. M is the youngest who thinks they can get away with anything (she does get away with some stuff but when I catch her... score one for Team Mom - she is a predictable 3 yr old.)

A is the only boy and acts like an only child. He wants me to drop everything for him all the time. Hold him. Feed him. Take him outside. He wants all my attention.

C is still in that 'finding her place stage'. I don't know where's she's going to fall but A is so so so attached to her and the big girls are good with her but also give C her space because they have a million other things.
at October 11, 2017

Email ThisBlogThis!Share to TwitterShare to FacebookShare to Pinterest
Labels: baby and toddler, baby brother, the sisters, things i think