Linking up with Kelly ... first week of February

This week has been an interesting one culminating with some whacko weather yesterday afternoon that canceled everything. The wind was pretty scary. Today the big girls had school and the preschoolers were on a delay which meant we did not opt in for preschool. So they enjoyed a morning of PBS and general fighting and bickering and snacking while I attempted to get work done pretty well if I may say so myself.

Also this week, much to E's great disappointment the AHG summer camp she went to last year is not operating this summer - I'm telling you last summer she had the best summer and didn't even know it. So that was a tear-filled conversation which is strike number two against summer 2020 because her (and mine) favorite local drama camp also got axed (we found out about that late last year and she was depressed for a week). So I had high hopes to try a non-AHG camp that is only an hour away and after careful coordination with her friend from school and getting R on board... E got in and R and her friend are on the waitlist!!!!!!! because registration opened last week and I said no to this camp originally because of the AHG camp. The irony of it all. So we are crossing fingers for two openings.

Finally in other I don't want to hear it news... we met with the builder about our addition plans, cut the fat and talked about a bare(-ish) bones addition to the kitchen and laundry room - I mean the whole thing is truly a want as opposed to a need but you get the point... before he left I asked him if he'd do what we were talking about and he basically said no. For a variety of reasons, sinking money into this house... trying to live in a house without a kitchen for AT LEAST 45 days... nothing major or anything.

So now I will stop the whining and because there's a whole lot more to be grateful for...

Tonight is the Daddy Daughter Dance at school 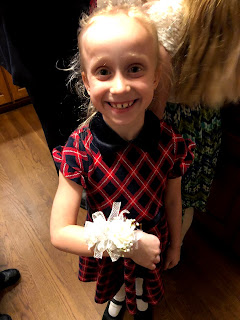 M insisted Papa not see her until she was ready 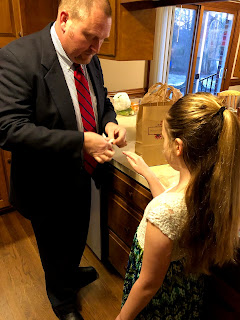 E insisted that she not match her sisters 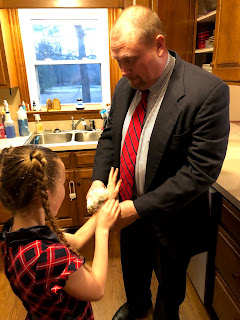 R, along with the others, was thrilled for the flowers and the dab or two of lipstick I let them wear 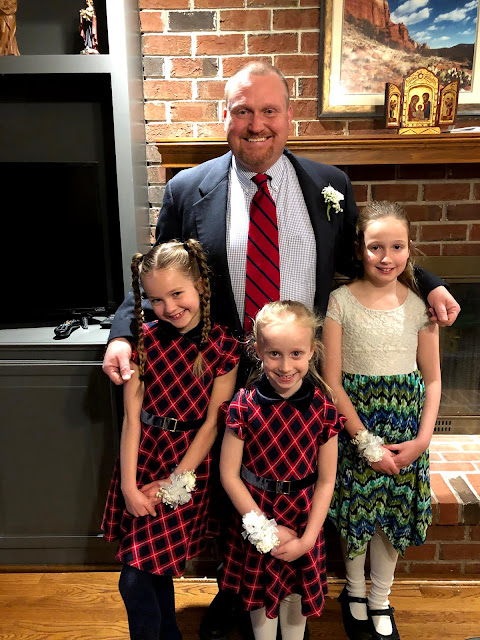 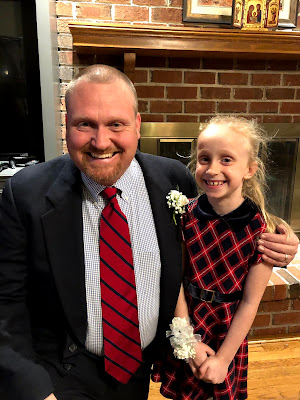 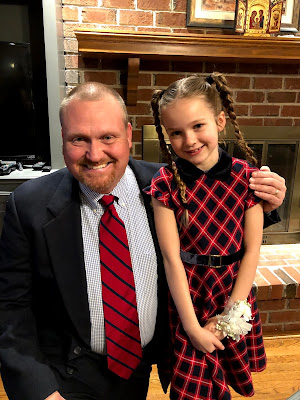 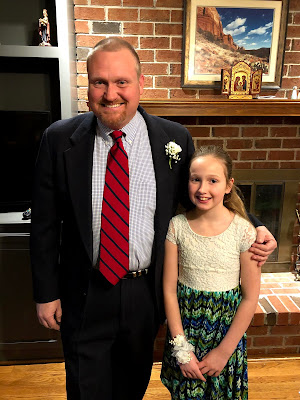 Today was Pizza Lunch at school which it is required of each class once a year to do the treats for pizza lunch. I have and probably will always do Rice Krispies - because I'm OCD like that. No deviation, please. So E's class had treat duty two months ago and there were reports of crunchy Rice Krispies, which normally would mean nothing to me but Lee said something about them and how they were REALLY crunchy... too crunchy (insert all the annoyed-ness because he's probably right, and nobody has EVER said anything about the texture before and heck I'm making homemade treats instead of getting Zebra cakes people!!!!!!!!!!!!!!!!!!) nothing against Zebra cakes or anything but you know 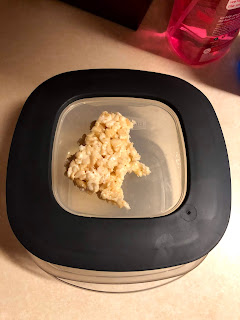 Eating the last one...

Well, let me tell you. If you Google hard Rice Krispies then you will know the problem because I am always running short on time. Turns out if you power-melt your marshmallows your Rice Krispies will be rock SOLID. Well you know what happens if you DON'T rush through the marshmallow melting process...

THEY ARE WAAAAAAAAAY better.

So after five years of making Rice Krispies for pizza lunch treats, guess who won't be rushing marshmallow melting EVER again. MOI - it is worth the wait and makes all the difference!

Why can't all the bananas have stickers? 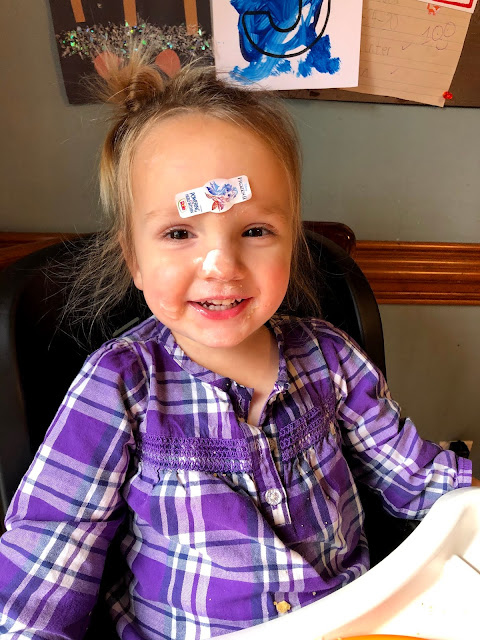 This girl might just drive me over the edge with her sassiness at school. Continuing to try and reign her in but not break her spirit because I love her. 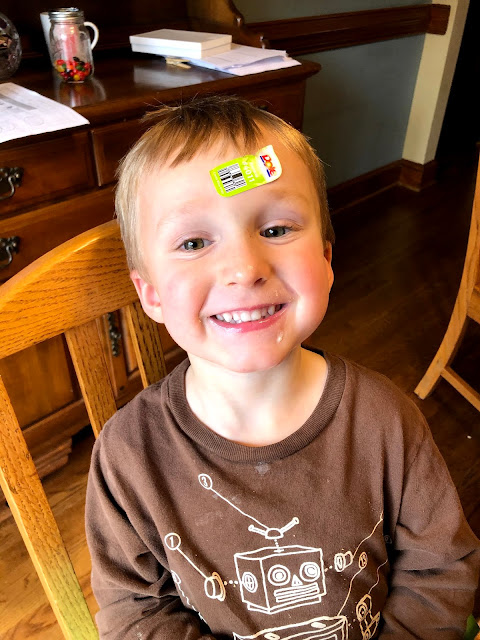 This guy might be driving me crazy but not taking his rests nicely so I'm trying to figure out alternatives for afternoon break time.

I'm pretty sure boys were meant to exist outside. I really think that outdoors is A's habitat. He loves to be outside and the warmer weather this week has meant even more outside time. 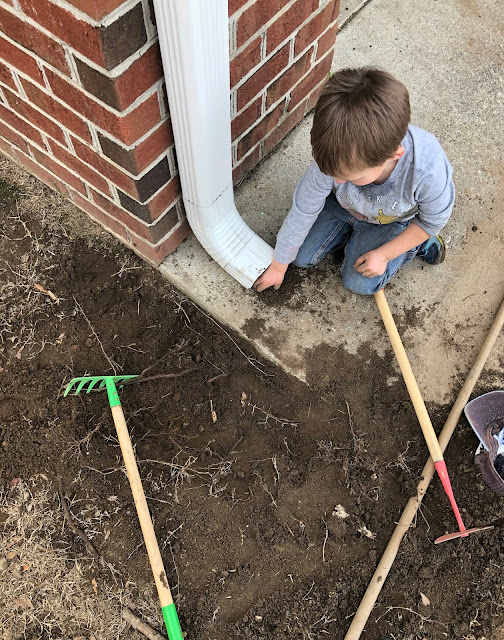 He loves to dig a hole and this week he decide to dig a hole by the gutter to which I asked him if he thought Papa wanted him to dig right there and he said 'probably not'. But he did find a 'sleeping snake' - an earthworm. Then when all the rain came it was filled up with water to A's delight. He would have been outside all day today had I let him but it was blustery and cold so I nixed his hole digging plans.

I mentioned here that I evicted J from the nursery bed. Well that didn't last long but he is falling asleep in the crib now so I have the bed to myself for part of the night.


On tap for the weekend is practice and pancakes, church, celebrating R's #8!!!!!!, and hopefully running 12(ish) miles. The half marathon is two weeks away and I finished the 12.5 miles last weekend so I know now it is possible to finish - maybe not in the time I'm hoping for... but then my crazy foot decided it needed to hurt but it has been getting better over the course of the week so I'm banking on a solid run before the party.

Next week is R's actual birthday and Valentines Day with all the valentines that are needed for school plus dinner with Lee and our third wheel J because he still doesn't take a bottle because nobody's tried...
at February 07, 2020

Email ThisBlogThis!Share to TwitterShare to FacebookShare to Pinterest
Labels: outside with the kiddos, preschool, traditions, trying twos