So we are now in the season of life in which there is VBS for our kiddos. R thinks that she should be allowed to go but then when she falls asleep before 8 (normally it's more like 8:30 when big sister is there for antics and singing parties and scream-fest) I know why 2 yr olds don't go to VBS.

E was hestitent to want to go to VBS in the first place because it is not like she has a ton of friends going or she really knows any one who goes to our local Roman Catholic parish. So Papa decided to volunteer but then they had volunteer overload so he was not needed. I'm grateful for that parish for a number of reasons and I should connect with more families there… I digress

I was not really sure how she would fair. But E totally rocked it. She came back jabbering about her 'work' she needed to do (coloring) and she filled out her prayer stars. She 'had' to fix her bag because the foam stickers just wouldn't stay on. 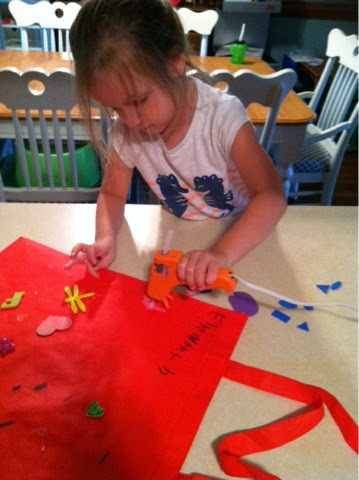 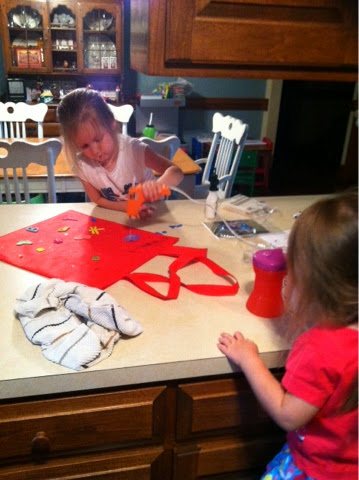 R and I supervised the glue gunning. E loaded up the back with a healthy dose of hot glue and I stuck on the stickers for her - she was not keen on the idea of the hot stickers so I really just had to make sure she did not get the tip close to her face/hair.

Otherwise, I really have no idea what they are doing in class because E 'doesn't know' what they did or who is in her class or who her teachers are. Well I mean she comes home with coloring pages and little crafts so I get the idea but Hello! details please : )

I usually get a full-detailed description of dessert (which she has imposed no dessert on herself after dinner so she can eat dessert at VBS). First it was twinkies, then cupcakes I think and last night was cinnamon sticks with whipped cream. At 8:30.


Sunday night E was bouncing off the walls until a good 10 pm and then she finally crashed. Maybe it is a combo of our kids are usually in bed between 7-7:30 plus a bit of, dessert at our house usually consists of a dum-dum or small Tootsie Roll (from the Treeeeeeeeet Box - just ask R) regardless I'm just going to "Let it Go" (because we are still singing Frozen around here) and let E soak up her time at VBS : )

We've had this conversation for the past two nights:

"Mama can I go back to VBS EVERY night?"