Alternatively, The Day in Which The Girls Ate Cherry Popsicles for Lunch and I Ate Cake

So after a fantastic 4th of July weekend the Kibbes kinda did a little Humpty Dumpty act and fell off our wall… Except (thus far) it's only been R. 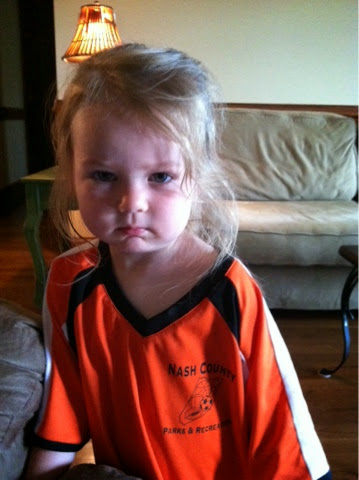 We had a great time at the pool and with Grammy and Grandpa Joe. Saturday was low key. Sunday was church-filled in the AM and neighbor-filled in the PM for dinner (I'm still hoping we did not contaminate them)

I knew something was up when I went to check on R last night and she was not sweating. Seriously the girl sweats in her sleep. I mean not a ton, but a noticeable sweat ring around her hairline is pretty standard. Last night she was warm and not sweaty. Trusty thermometer. Low grade fever.

Also in my mind a little boy in her class had Strep at the end of last week (I'm a calculated risk taker so we are no strangers to school-bourne illness; I get it. It happens. Es mi vida. And I'm okay with it) so I'd been counting the days for the 2-5 day incubation period. Sunday was the fourth day. Awesome.

Now I've been reading (and almost finished) Catholic Homeschooling: Homeward Bound and one of the points that the authors bring up is that (SOME TIMES) (SOME) parents can see their kids' sickness or snow days from school as a burden because it conflicts with their work schedules. Hmmm… {cough, cough, nudge… them} Yeah that was me. Once or twice or maybe (one, two, three, four, five, six, seven,) eight or nine times this winter. So I made a point to not get myself overly stressed about work so that I could focus my attention on the sick bebe. For it being waist deep in pool season and my boss on the other side of the world, I'd say I didn't do too bad. I have the most understanding bosses EVER just ask Nani and Lee.

4:30 my alarm goes off (yes that is the 4 to the 30) which I usually snooze through. I get up to check on R and the kid is standing up in her crib, half asleep, pretty hot. So I scoop her up. Take el temp and we rock in the chair with some OJ.

R requests to be put back in her crib? yeah I know she's totally sick. Which is awesome because I know I can get some work stuff out of the way before the girls get up and I get on the phone to the peds office and cancel our dentist appts for Tuesday.

I get M up around 7-ish. Not much movement out of the girls room which smells like sickness to me because E and R start to twist and shout around 6:15 or 6:35 on good mornings. 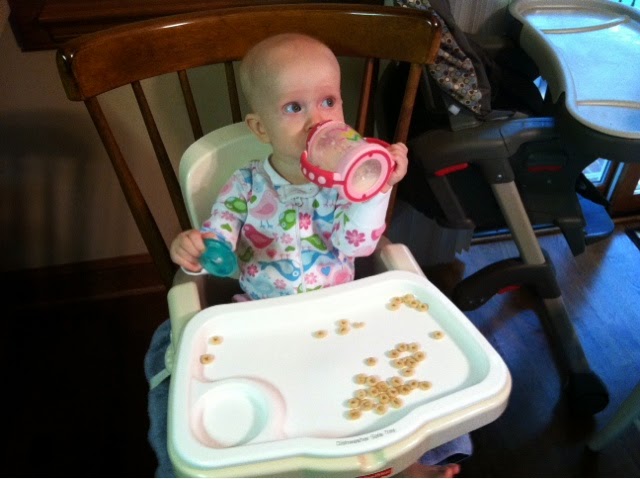 7:30 still no antics out of the big girls. Not surprised for R but super weirded out by E. Papa calls to check for an update and I tell him I cannot give him one. Well just after 8 the big girls drag themselves out of bed. E is definitely not dragging so I am hopeful. R is a pitiful hot mess… Literally. 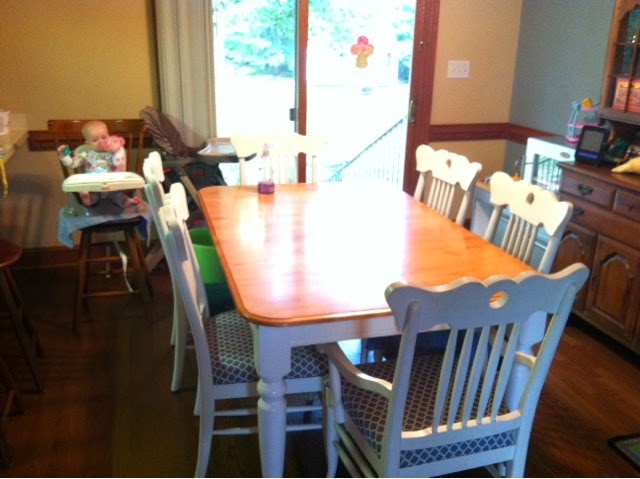 Nothing major to report in the AM other than coloring until our allotted 10 Elmo break. I am a caver when it comes to kids being sick. I cannot stand it when they sit in front of the tube but sickness times calls for TV measures (not all day long through). It happens to be perfect because we have a 11:15 appt at the dr office. I get M down for a morning rest later than I had hoped because my boss called me RIGHT as I was about to put her down BUT not-stressing. Remaining calm. 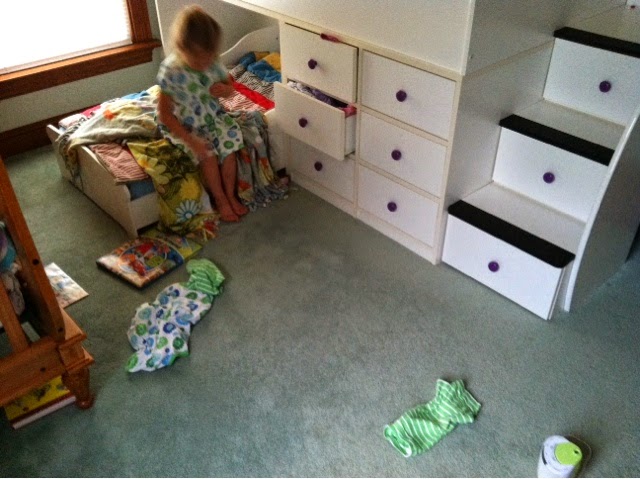 E picked out the outfits after a quick consult with R 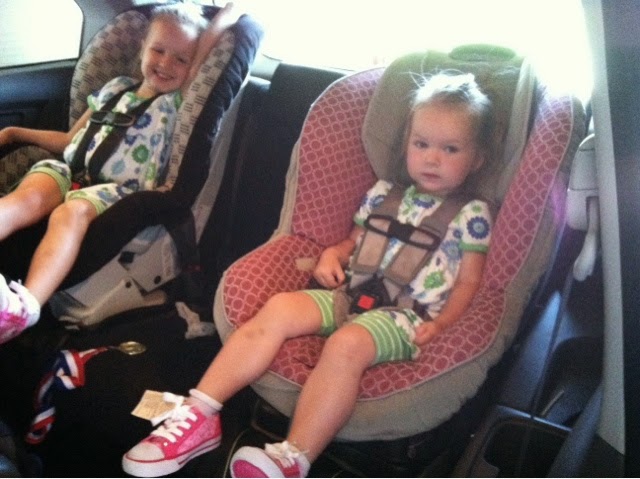 I promise they picked their own clothes out… Believe no one EVER. But it is TRUE!!!!! 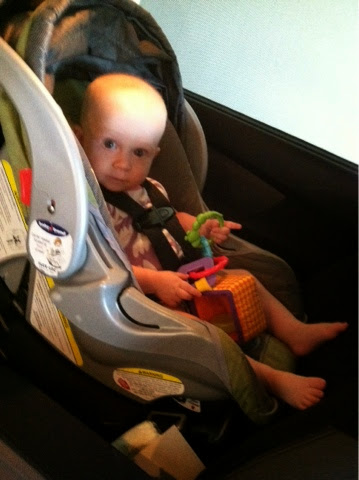 We load up and head out. Pulling to the parking lot 2 minutes past our appt time. Seeing that it is the last appointment of the morning so I am not horribly worried. I mean I probably won't seen until noon anyway so what does five minutes matter? 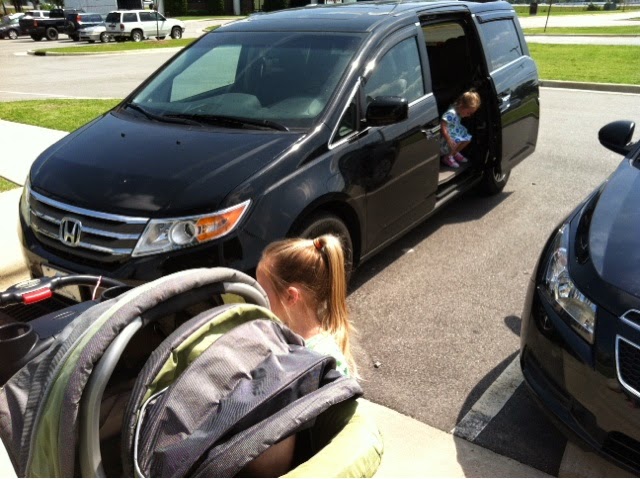 My favorite parking spot at the dr office. Extra wide. Handicap on one side. Curb on the other 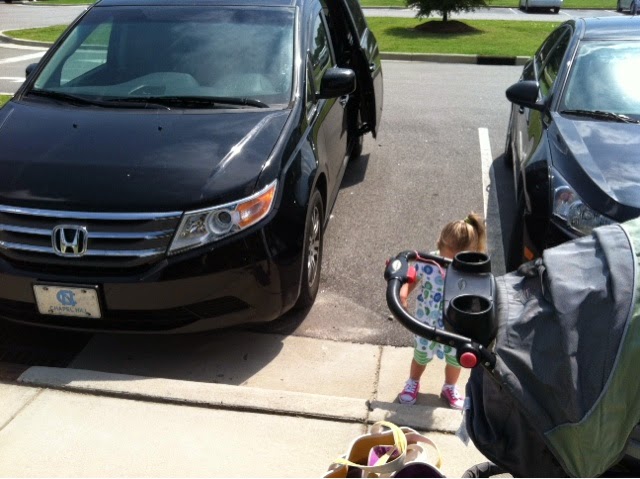 Did mention I have a favorite spot? In case you needed one more piece of evidence.

We take our seats and the waiting game begins at 11:25. I have this thing where I don't like the girls to be running around like banchee children so they must sit in their chairs. Am I weird? I did not load up on books or iPad or anything like that. Gasp. Well 12:05 rolls around and we are the only ones left. Pretty standard for our dr to be super busy so not surprised. R is a zombie and has been sitting quietly the whole time. E was fidgeting but overall good. M has been content in her carseat. 12:15 I go to the window and see what's up.

"Oh they are just running behind"

I can tell we are on the cusp of it getting bad so bust out the goldfish and OJ since you know it's lunch time.

12:35-ish I'm getting SUPER annoyed now. I mean come on. I have a sick kid and two other kids who are being well behaved PLEASE JUST LET ME SEE ANOTHER DOCTOR!!!!!!!!!

Yeah then we get called back.

I beg the nurse to let me see another doctor because I'm not waiting for ANOTHER HOUR!!!!!!!!!

"They're all at lunch"

To the make-ya-think-you're-claustrophobic room. Add to that I have an 8 month old who is seemingly healthy and I don't want cross-contamination and a 4 yr old who is wound up with energy and a 2 yr old who just wants to be in her crib. I'm outta distraction for the big girls.

But then the nurse brings Popsicles. Yeah I heard the Alleluia too. 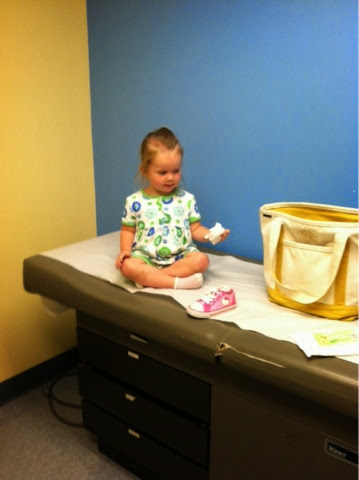 so not buying your story about this 'chair' 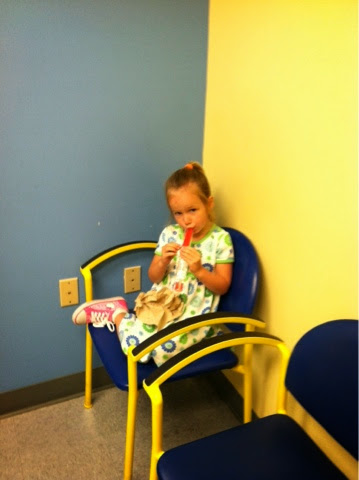 popsicle and not sick #winning 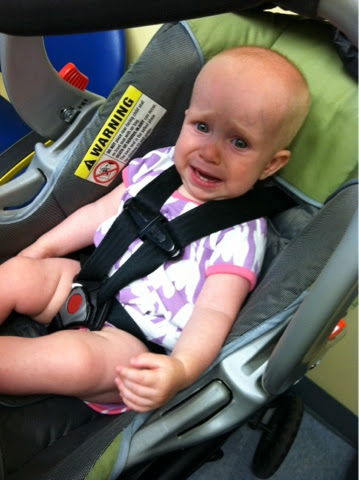 
M is getting SUPER annoyed about her status as the child-of-the-carseat so I get her out and convince R she is in the special really big chair and E just needs to hold it together for another few minutes but every other sentence is:

Doctor comes apologizes for the wait. Yeah I know. It's not your fault it is the BLEEPING scheduling so you need to reevaluate that stat. But I did not say anything because I think I would have cried. BUT an email is in the works and he will read it and $10 says he'll respond because he did this.

ANYHOW… just waiting to get the paper for the pink gooey goodness and… the Strep test is negative.

"Yeah it's probably a virus"

All that waiting and elevated blood pressure and waking up from nap and not eating lunch for that.

R falls asleep on the way home. E and M chow down on some food at 1:30 which is even late for us. I vent to my SIL and Nani and drown my frustration is cake. Yep I'm your textbook emotional eater but the cake was worth it.

Cooled off. Collected myself got a game plan for present situation. Got a game plan for future situations. Thankful for my healthy kids. Said a prayer for the lady in the waiting room who had it rough with her one kid. I think I have problems but then I realize… I REALLY DON'T

R finally got up from the nap with a super high temp so it was more meds and I tricked her into actually drinking something and gave her a juice box. I tell you, I was desperada. She was so pitiful. E was upstair with Papa coloring and M as asleep and I was wrapping up work stuff so I sat her at the table to "help Mama" while she ate a popsicle. Desperation abounds.

Clearly we are thinking logically here. All she wants to do is get down but the popsicle is not done so I convince her to look at book bags. One of her favorite things to do on the computer 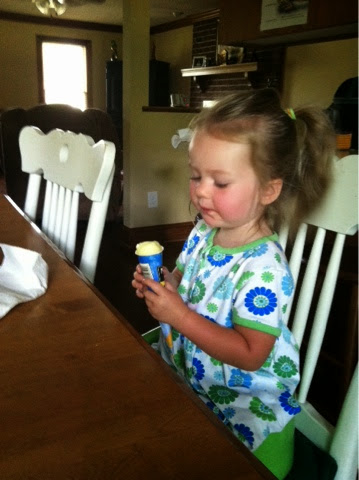 Now she's got her eye set on the purple one. 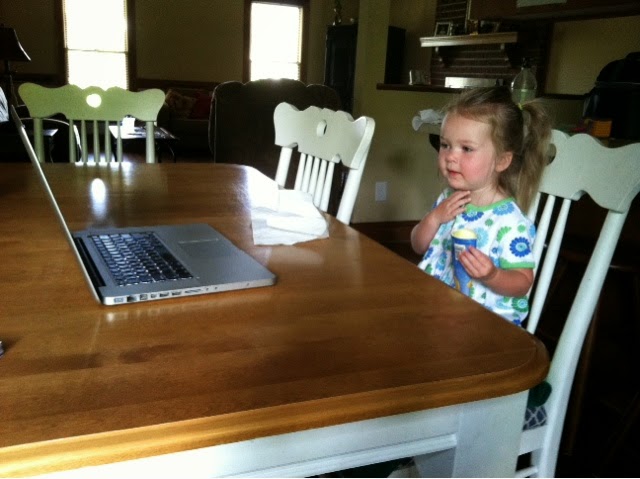 Dinner was a bust for R and she still could not finish that popsicle either. E was her usual silly self. M was last on the totem pole and content with having some floor time while I got the girls in their sock-her  juer-sees for bed - R is obsessed with wearing her soccer jersey. Then M got mad and had to go to the jumper which got her even more mad because I had to read to the girls and pray and get them in bed. It was the take care of two with one stone issue. M was expressing her discontent and in walks Jibbe just as we got done praying. Whew. M deserved some Jibbe time after the day she had. R went almost straight to sleep and E was bouncing around in and out of her room per the usual. I was able to clean up the kitchen since M was getting some much needed attention. Papa had to make a diaper and milk run to Sams because R was on her VERY last diaper. You can diaper a kid up a size but you definitely cannot diaper them down.

Then once things were finally settling down the phone rings. It is a bit late. It is Lee.

Me - Hello
Lee - I'm just leaving
Me - Did your car start? Is the car okay?
Lee - Yeah it's fine. Sams was packed
Me - Oh okay. Well I thought I going to have to come and get you

Anyhow. That's the day in a nutshell if you even made it this far. I had Lee get the girls Frozen at Sams because of the stellar behavior at the doctor and for those who know me I'm a tough critic. Even I was impressed.