7QTs - Great and Holy Lent is Upon Us

Good old Lent... I am quite happy it is that time of year again

Lent for me is a time of penance, sacrificing, and reflecting. It is a time when I really try to decrease so that He may increase. Jesus fasted and prayed in the desert for 40 days once if not twice that is recorded in the Bible. He overcame the temptations of the evil one because of His fasting and praying.

People have written some excellent posts on how they are celebrating Lent with their families - driving the point home for smaller children can be a lot more challenging. If you asked our kids what was involved with Lent you'd probably get - praying the Rosary (we do this on the ride to school), going to Presanctified Liturgy (my first Byzantine / Eastern Catholic experience - very moving), Fish Fries and Stations of the Cross (because well, we like our local Roman Catholic church alot too : )

Monday came along and it was a day off from school so no Rosary - Byzantine Lent begins at sundown on Cheesefare/Forgiveness Sunday so the first full day of Lent is Monday; no Ashes on Wednesday here : ) So no Rosary on Monday because I was out of my zone and figured we could catch up later in the week. But then the snow came and we weren't in school for a week!

The first week of Lent was turning out to be a you-can-only-go-up-from-here kinda week. Friday I buckled down and had us say the first decade during our morning prayer time. (and we said the second decade on the way to Stations so three more left before Monday)

When I got home from work I gave E and R their candles and we did our first 'Hide-and-Pray' (which I had been meaning to also start on Monday). Why electric tea-lights? I have no idea. It gives them something to hold and to look at and if they choose a hiding spot in a closet then they can still see.

I guess my hope for Hide-and-Pray is that the girls will learn to stop and take a few (we are starting at 2 minutes now) and talk to God and thank Him for their days and pray for anyone who needs it. E has reported to me on several occasion that 'she doesn't know how to pray' and I just tell her to talk to God. R is not too terribly into Hide-and-Pray other than the hiding part of our 2 minutes but its a start. It is my hope that we can continue Hide-and-Pray once Lent is over - getting it started is the hardest part of creating a new habit, you know? I'm going to try and prayer The Angelus during our 2 minutes. 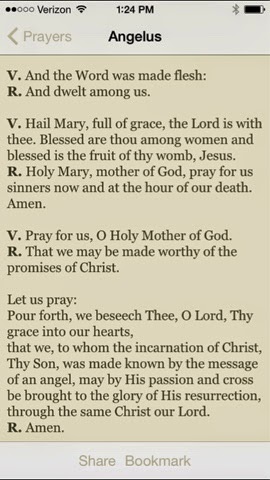 Speaking of praying... If you could spare a prayer for Lindsay and her baby that would be awesome.

This isn't terribly Lenten centered but it did happen the first week of Lent so whatever... 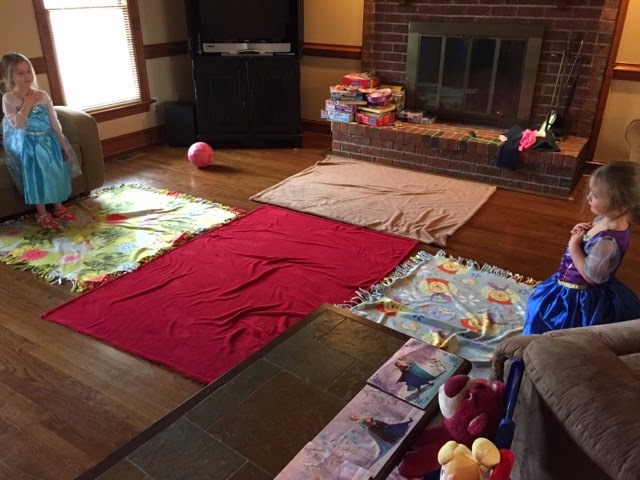 The girls set up some form of a church service for their animals while we were at home all week... 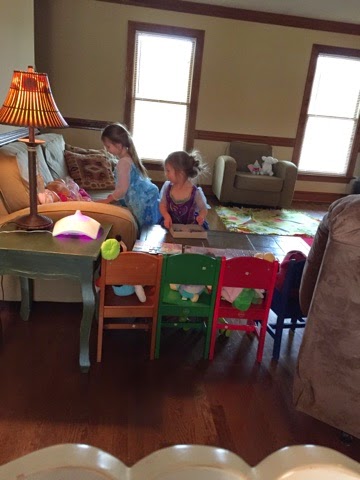 I cannot say I was overly surprised because we know a priest with 6 daughters and he has found them recreating parts of Liturgy. So... I guess they are daughters after their Papa's heart.

We did not make it to Presanctified this week because of the snow but we were able to go to the Fish Fry on Friday... We got one of the last plates BECAUSE THEY ALWAYS RUN OUT THE FIRST WEEK... ALWAYS 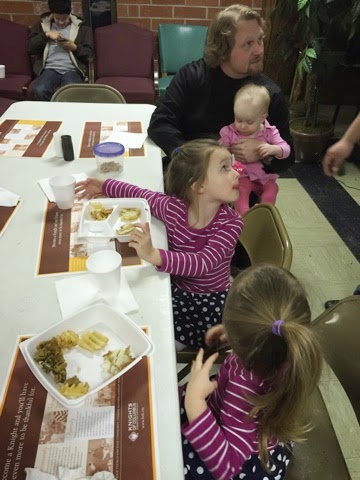 R kept saying that we were going to a Fren Fry and that she wanted to go to McDonalds and play on the playground. E and I tried to convince her that it was a FISH FRY and that the playground would be too cold - thank you 20 degree freezing-ness. We got to church and R said - "Where are we?"

I never grew up going to Fish Fries - or at least I don't remember going to any but maybe my memory is not serving me well. Definitely meatless Fridays during Lent growing up though. Anyhow, we've been going to Fish Fry and Stations of the Cross starting our third year now and I really enjoy this tradition the girls have come to expect. Food + (usually time to play) + church = excellent. The ONLY complaint I have with our Friday night activities in that Stations starts at 7 which is passed M's bedtime and nearing the big girls bedtime. So when we roll into the garage at 8:15 and everyone is out of sorts and screaming and loud and everything... take a deep breathe and put them on a crash course to bed : ) 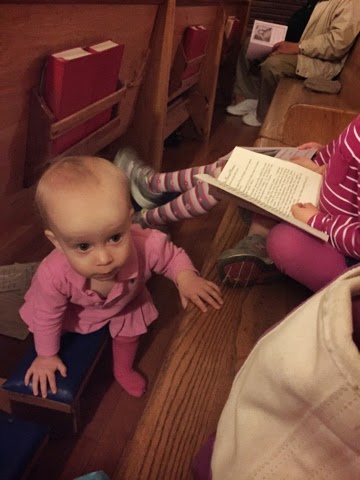 So we headed to Stations after the Fish Fry (of course we HAD to use the bathroom in the basement first). It is easy to forgot how loud a small person's voice can be in a quiet church with high ceilings. We got into our whisper mode and made our camp in our normal spot - last pew on the right. Our church does not have pews (they are not traditional in Byzantine churches) so seats without separation and kneelers are quite the novelty at first.

For some reason E did not want to sit by herself this time - which was probably better because sometime she needs a little refresher on behavior and I need to be close. So I was placing bets with myself on how long we'd last. 3 yr old + 15 month (past bedtime) = doomed, right? Wrong. Fortunately this generous mother sent her daughter over to our pew. Older girl for E and R to look up to. Check. Someone creating a divider between E and R. Check. Someone to hold book open so I could pray as I rangled the cling-on-child M. YES. Seriously, seriously. Possibly one of the best Stations experiences we've had.

And if you've wondering where Papa was during all this... You know when the priest barely has a voice because he's sick - guess who is called to action for leading Stations. Yep. You guessed. He is always with the group leading Stations anyways so it is always me and the girls so nothing out of the ordinary I suppose. Oh to be a deacon's wife : )

Though I will say I have high hopes for R to improve. She lounged around on the pew (which is not great). I think once E gets back into things then HOPEFULLY R will take the cue and maybe we'll have more visitors our pew too.

Now I probably should have made this one first...

You cannot going into Fasting and Pray mode without a party before hand right? 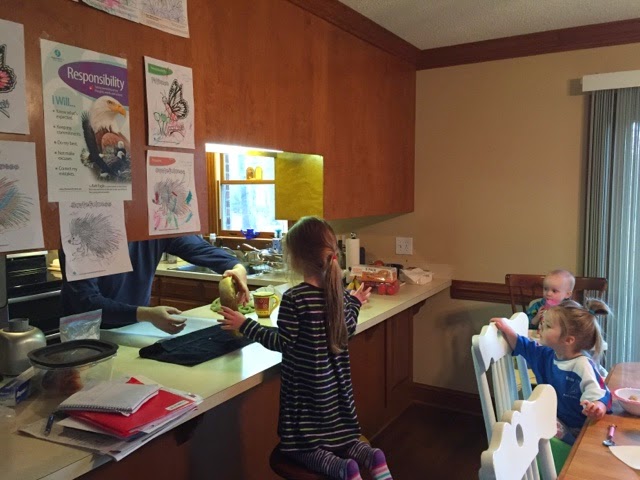 Several weeks ago my parents hosted their annual Marti Gras party - not actually on Fat Tuesday. I think it was several Saturdays before actually

Last year E got the baby in her piece of cake so you get the bebe, you bring the cake next year. 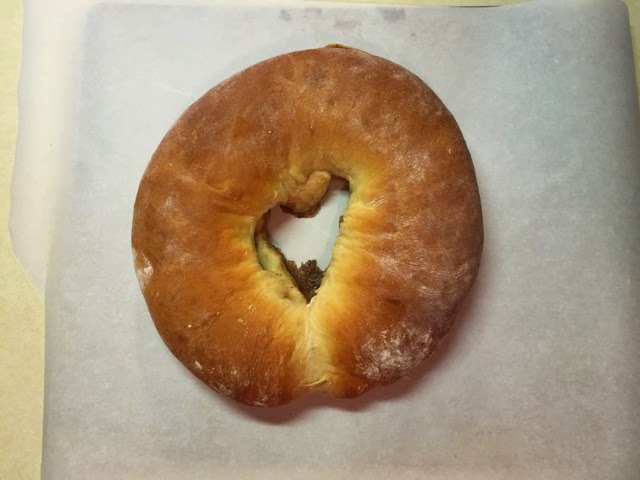 Heart in the middle of the King Cake : ) 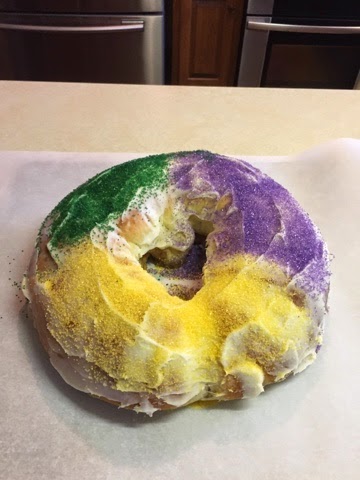 All decorated for the party : ) 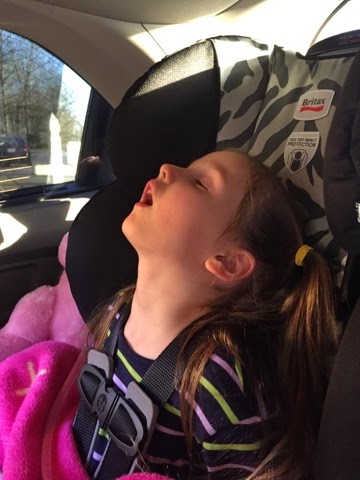 I'll have to do a post with some Marti Gras pics but we had a fun time and we're not bringing the cake next year! 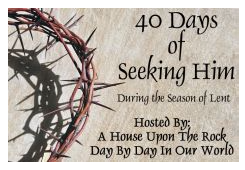