In which I buy 5 straw cups and only 4 straws... #notlying #wishiwerekidding

E and I never got around to painting her footprint for her birthday earlier this year. I decided to mix it up a little bit... 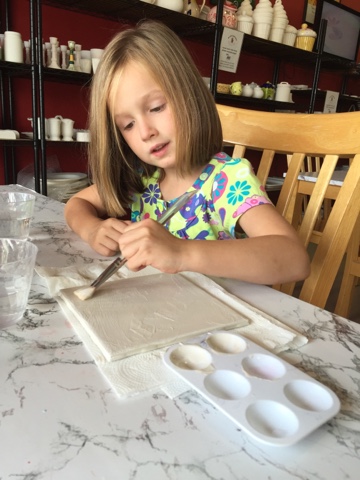 And do hand prints instead of footprints... 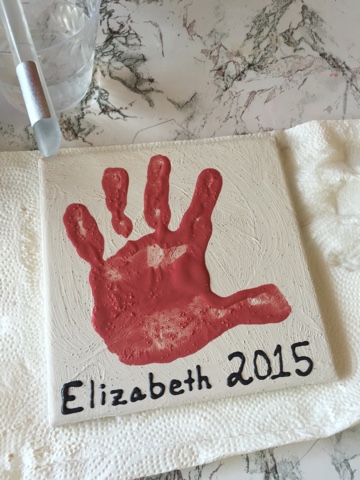 She did glitter background and glitter hand paint and this surprises anyone?

I'm thinking handprint for Kindergarten, 6th and 9th grade and nix the footprint...

At some point I'm going to run out of space to keep yearly foot prints and honestly its the baby footprints that are the cutest, right?

We spent some of last weekend in Raleigh and feasted on grilled goodness and this: 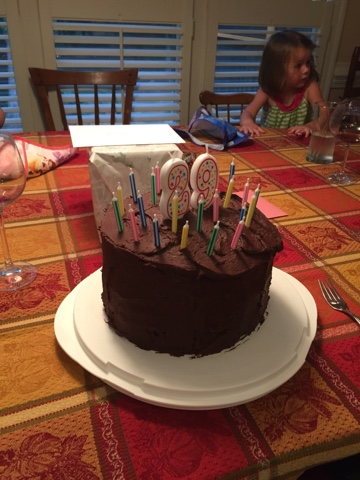 German chocolate cake made by none other than Grammy : ) 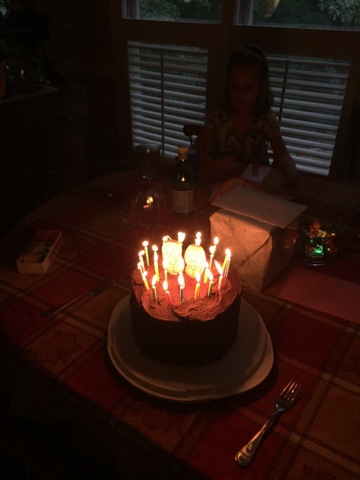 Yes I did blow all the candles out in one breathe... just for the record 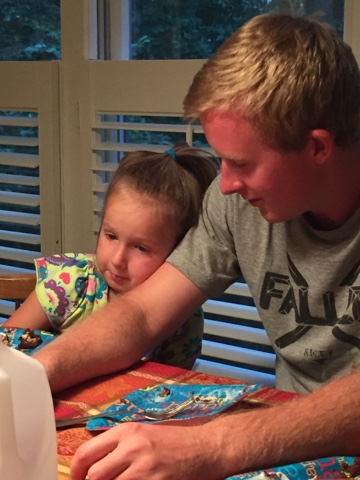 I think the week was catching up with E... Good thing Uncle Kev was there : )

So we made the not-so-welcome move of this girl into the big girls room... 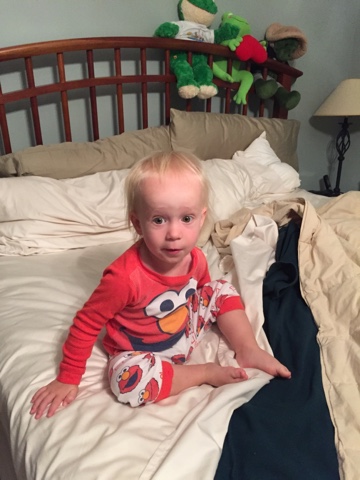 We put her down about 20-30 minutes ahead of the other girls which I can't say is helping the noise factor once everyone's in there. E is super frustrated that M likes to stand up and talk. The one night Papa was gone it was much noisier in there so I think they know he means business.

Also, M has been getting up INSANELY early. First it was 6 then 5:30 and yesterday it was 5:15. When it's before six I go in there and tell her it's still nighttime and if she cries I'll put her back in the other room - and you know what, she doesn't cry. Don't think just because she's not 2 (or 3) that she doesn't understand stuff. She knows... she knows!

This is probably worthy of its own post but... 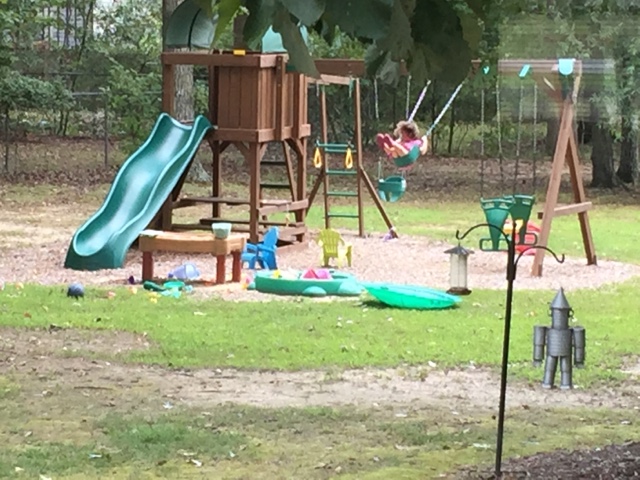 R decided she was going to get this whole pumping thing down and ever since after church on Sunday she won't stay off the swing. She is so stinking proud of herself - and she should be. You see R is not overly motivated like her big sister so R really has to see the value in doing/learning something in order to give it much thought and EFFORT.

Well for whatever reason - was it the Friday playdate when the three older girls were having a blast swinging themselves - she got on the pumping train!

Yesterday was a bit of a rough patch for us... It started with this conversation I had with Lee in his office at 5:30 (in the AM) 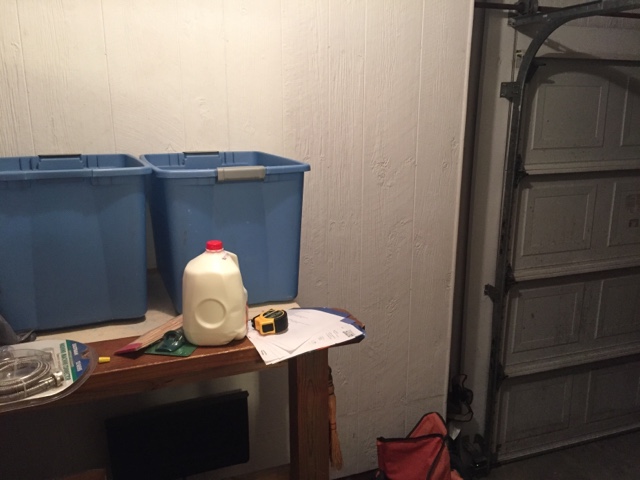 After a 5:45 am milk run later everyone had some cool dairy goodness for breakfast. 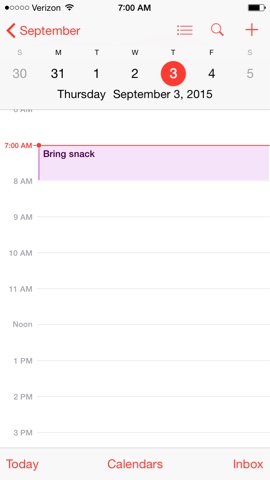 Aside from that, it was E's day to bring snack to school and I had it on the master calendar plus my phone plus I told E several times the night before to not let us forget her snack.

I'm quite sure some morning I speak in tongues!

Me reminding/telling everyone to get shoes on is NOTHING NEW
ME YELLING BECAUSE I DON'T THINK YOU HEAR ME STRESSES ME AND YOU AND EVERYONE ELSE OUT SO PLEASE JUST GET YOUR SHOES ON!!!!!!!!!!!!!!!!!!!!!!

Then there were the uniform compliant PE shoes for E that she said were 'tight' but they were a half size larger than she actual size so.... Hopefully they'll stretch????

Today, I firmly resolved to not raise my voice at departure time because I could tell a difference in E's demeanor when we got to school and I don't want my attitude/behavior to start her off on the wrong foot for the day

I have been scouring the Target aisles ever since school started to find these cups on sale. 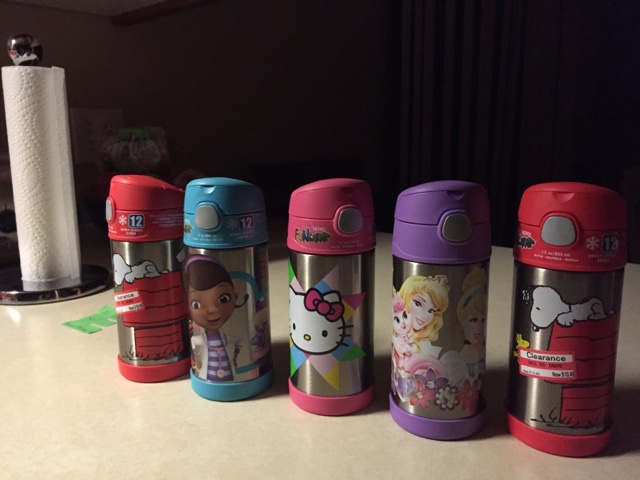 They are nearly indestructible - M has dropped her cup on the floor so many times and I think it has damaged the floor and the cup is unscathed.

They are dishwasher friendly

They are easy to assemble and disassemble - some straw cups are awful to try and re-thread the straw back - trust me... been there and cup is no longer in our house.

I thought they were leak-less cups because my OCD self cannot stand a leaky cup - and these are mostly leak free. For the ages they were made for probably 2.5ish and up because at 2.5 yrs old kids know it is not a good idea to turn the cup upsidedown and shake it. Well when you give a 9 month old this cup because its the only cup she wants then there will be leakage BUT the flow of the leaking liquid is pretty slow so you really have to not be watching (like we do) in order for there to be a HUGE mess - which has happened on more than several occasions.

Overall this is the cup of choice for our house but I won't pay $15 for them. I don't even like paying $10 on sale but there are some things in this world that make my life easier and these cups are one of them. Only having 4 in rotation can be tough when I leave them in the van over the weekend or forget one at church or you know, my life, stuff comes up.

So I got 3 more for the girls. They've already divided them out because... sharing cups is not our forte. M claimed the Hello Kitty, E the princess and R the Doc McStuffins. Peace in my world.

I got the Snoopy cups to make good on a promise I made to a family at church who saved one of our cups from a time when M left hers on the playground. And the other is for our godson who well... when you've number 6 of 7 I'll bet you don't have a cup to call your own so I'm plastering his name all over it before I send it off : )

I made another life simplification decision this week - aside from the cups. And really it was not the easiest of decisions...

So fall soccer is upon us. I have coached the last I don't know how many seasons. Bebe #4 is throwing (a welcomed) loop into the coaching of said teamS. Yes E and R play in different age groups - like they did last season - that was no cakewalk in May.

Speaking of walking with cakes let's envision this season. E's practice followed by R's game/practice coupled with Papa's Bible Study (which he swapped nights so he and E can try out AHG -more on that later) thus leaving M supervisor-less as Jibbe goes to BS AND AND AND let's not forget bebe #4 thrown in the mix come sometime in October. Sounds like a recipe for DISASTER when not coaching. When coaching or co-coaching or being somewhat involved in the practices and the games? Yeah, I'm crazy but not THAT crazy.

I knew fall soccer coaching involvement would be tricky - but I ACTUALLY LIKE IT so how to be involved but not overcommit?

That was pretty much decided for me in a way I wasn't thrilled about but I'm willing to give it a try.

The league we play in low key league (very parks and rec league, nothing like the kind of soccer my parents let me play in) but this season they went to dividing out the girls from the boys - which I wasn't crazy about and I'm not totally sold on yet.

I mean I get it. The fact that the girls drop out after about 7 or 8 is an issue and I can see how if you track girls to play with girls and keep playing with girls through middle school then they might stick with it longer. I get it. I've seen it. Even last year with the 4-5 teams the boys are much more aggressive and the girls tend to shy away - maybe because they can or maybe they are legit intimidated (I've seen one single exception - one CONSISTENTLY aggressive girl who pays no mind to the boys).

So my option was this.... Leave E as the only girl on her team and only girl in the boys league OR put her on a girls team. Some girls may have done really well but knowing E's personality, Lee and I agreed she'd probably get pushed further into the 'I don't need to do anything on the field because the boys are running around like crazy.'

Girls team it is for her. Then there was R. I knew practice/games without Papa would be MISERABLE. Coupled with the fact there wouldn't be any huge 5.5 yr old boys running and kicking the ball 100 miles an hour AND knowing R's participation level at the 4-5 practice in the spring was much better than at her own practice - we made an executive decision to put her on the 4-5 girls team with E. One practice a night. One game a weekend. Life simplified.

Now the judge/fairness-keeper in me is super irked by this because R should be afforded the opportunity to play with her age group - just like E was.

BUT, I'm going to take a nod from Kathryn and others about not getting burned out, overbooked and super-stressed about extracurricular activities and maintain as much as our collective family sanity as possible. 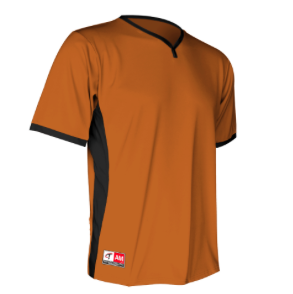 Here's to the Cobras this fall.

If there had been hot pink jerseys we would have been the pink Cobras but after SO MUCH STINKIN' debate we will be bronze. Because the color of the uniform and the team mascot are just as important as what's for snack after the games!
at September 04, 2015

Email ThisBlogThis!Share to TwitterShare to FacebookShare to Pinterest
Labels: birthday, mama and papa, outside with the kiddos, sleeping, soccer, the sisters, traditions