7QTs - The ToothFairy and St. Nicholas

On my morning off/called into work and decided it was too cold for pools, I had a minute to organize stuff for St. Nicholas Day (which is good for you otherwise I wouldn't have time for this post - lucky you!) 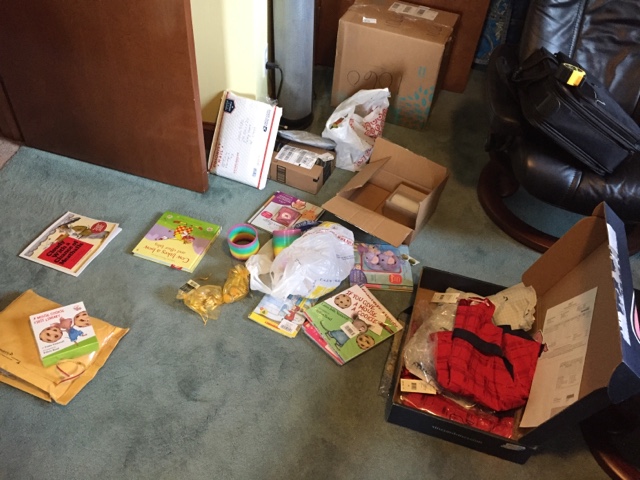 Which is actually Sunday so technically we shouldn't see a visit from St. Nicholas until Sunday morning but we leave for church insanely early plus we are celebrating Uncle Kev's birthday in the afternoon so we made the executive decision to have an all-day vigil celebration for St. Nicholas.

The girls had to make some decision as to what toys St. Nicholas going to get 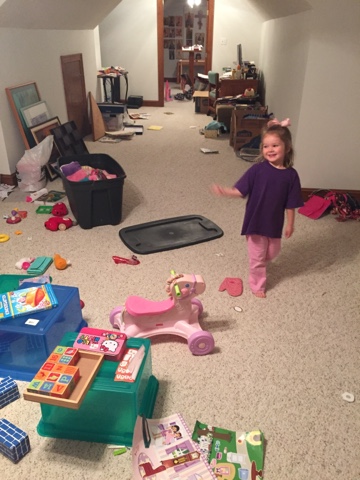 Which was our Advent activity for the week. Collect toys for St. Nicholas to give to other kids. Where'd we come up with this? I really have no idea but we are going to roll with it. 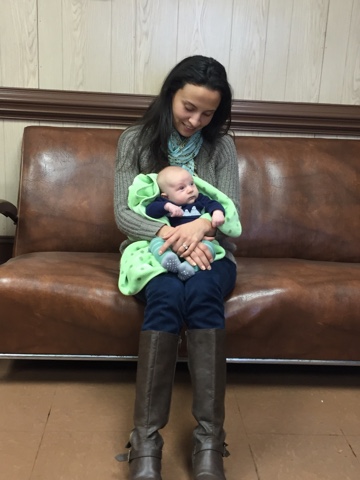 A and I stopped by and had lunch with Nani. She and I discussed all things, St. Nicholas, Santa, and the ToothFairy and more! Which is interesting because at the girls preschool Santa is not talked about by the teachers, which is fine. Well at E's school now Santa is talked about, which is also fine.

We have always told the kids that Santa does not come to our house on Christmas. St. Nicholas comes on his feast day. There really hasn't been any further questions - though I'd be happy to answer them. E wants to bring some reindeer food to Grammys for Christmas to put in the yard in case the reindeer get hungry- which is fine with me. Though I reminded her that just because food was getting put out didn't mean Santa would come.

I wonder what she thinks about Santa? We've never done pictures at the mall or mailing a Christmas list to Santa or anything like that so everything she thinks about him is all from things she's heard from others. Oh to be inside her head! 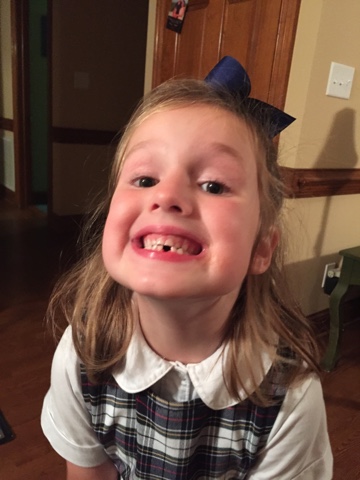 E lost a tooth tonight. It is her first and I pulled it out and I almost cried. It was actually quite funny because she was FREAKING out about it - like screaming and crying and dancing around the bathroom because she was 'SO SCARED' but could articulate what was scary other than the tooth hanging on by a thread. Finally I let her alone in the bathroom because screaming E and screaming A aren't a good mix. Then she came out semi-composed and told me she was ready. Then I just pulled it out and all the screaming was over - even though she looked like a vampire will all the blood coming from her mouth!

It was so cute to watch her stand in the mirror and check out her mouth and then proudly show off her tooth to everyone.

Also, after dinner R went up to M and said - Oh, you still have all your teeth.

Thanks for checking there R.

Ask me how the ToothFairy comes to my house, Santa does not and St. Nicholas does? Yeah, that's exactly what Nani and I were in deep discuss over and seriously, this whole parenting thing is a series of trial and error and hope you don't do anything to mess up your kids!

M finally has enough hair to do a semi-good pony 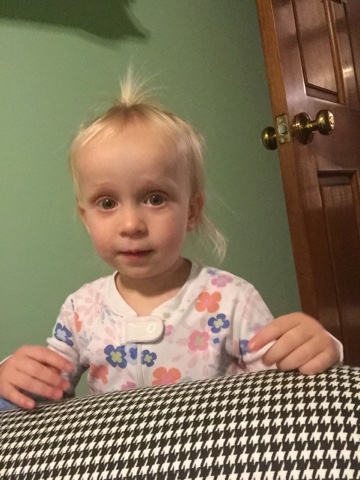 And she loves it and won't let me take it out! And she's also semi-interested in actually going to the potty so maybe we'll be back to a one diapering baby house? I'm not holding my breathe. 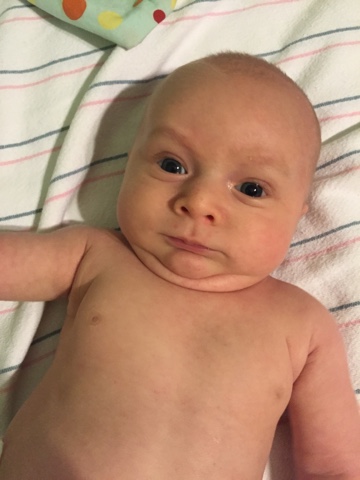 I think I like him a whole lot. Even though he won't take a bottle and he makes such boyish burps and other sounds and smells.

It's the first of the month so that means... 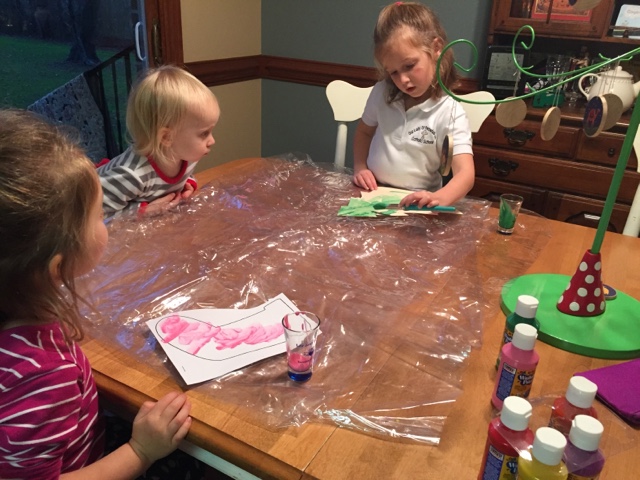 Craft time for school. M kept on saying - 'I do homework' - no homework assignment for Mother Morning Out. Though I am quite sure M would be very content in the 3 yr old.

I cannot believe I actually let R paint - but I didn't regret it. E LOVES painting so it is necessary to get the paint out for her projects. 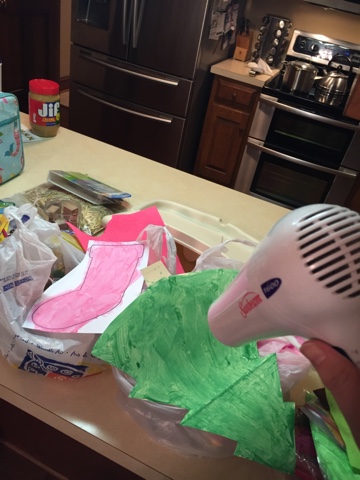 I needed these projects to dry fast so hopefully nothing too toxic was released because there was a funny smell about the paint as I was blow-drying it. 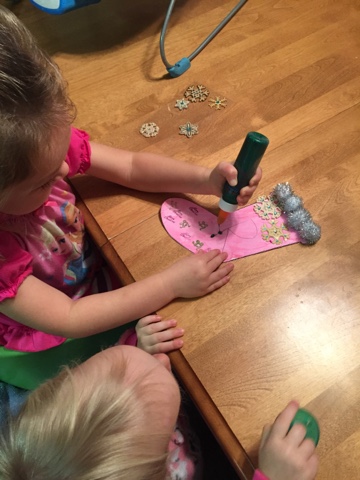 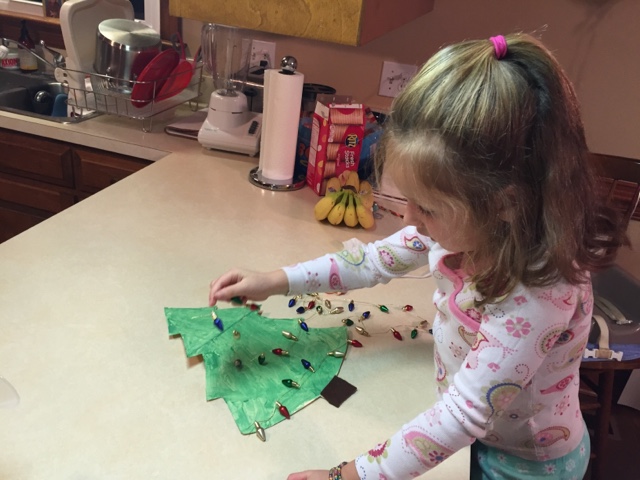 E is much more of a crafter than R. She HAD to have felt for the stump and lights of course. Fortunately our neighbor was headed to the Hobbiest of Lobbiest earlier in the afternoon so we got the lights strung on the tree the same day. You think stringing lights on a tree is hard? Trying stringing them on a flat tree with hot glue! 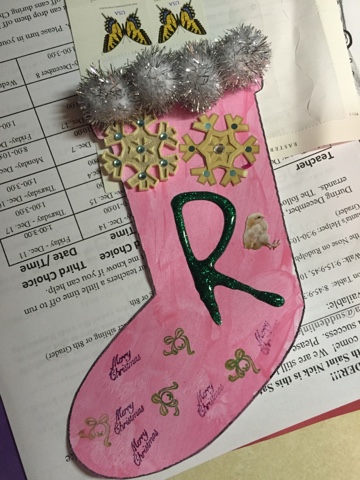 Everything about R's stocking was totally normal until the next morning and I realized she had snuck a chicken on it! That pretty much sums up R right now. She just does what she wants because she likes it, even if it does not make an ounce of sense.

E kept on telling R that R's stocking was not going to be out of pink felt - like her's was. I reassured E that R was going to do this however she wanted! I must say stamps are all the rave around here - right under paint! 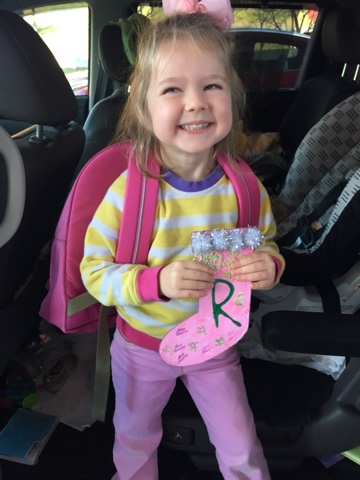 Also it is worth noting that for her Christmas program practice, she was trembling on stage - which makes me totally understand why she just stood there and looking behind her during the performance last Christmas : ) Everyone has high hopes that she'll come to grips with her fears because she has quite the singing voice!

I am trembling over the thought of the Christmas programs also because they happen to be on the same night - Praise the Lord they are an hour apart. BUT, can we say crazy night??? It was the one thing I had been wondering about since school started would the dates collide. At first they didn't so I thought I was in the clear but then things were rescheduled to really make things interesting. I'll dish on that once/if/when we survive it!
crafty crazy day quick takes things i think traditions