Last week at school there was dress like your favorite book character day. First E wanted to be Elsa but I totally pulled the mom-veto-card because Elsa was in a movie first and then had 501 books written about her so.... 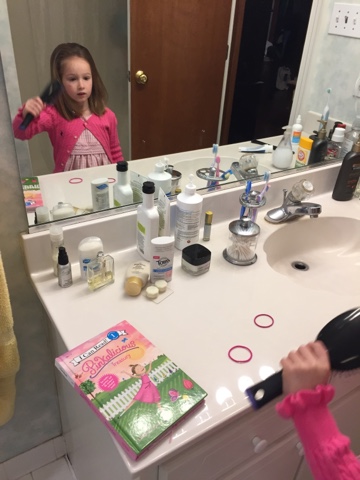 So Pinkalicious it was. 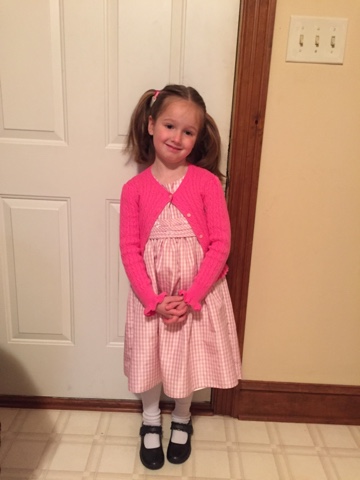 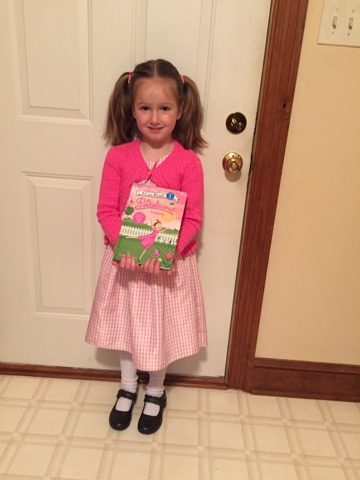 But she really does like Pinkalicious. Proof - last night she was reading Cupcake Calamity for AR (because she wanted to read 2 AR books) and she was so tired and it was pain staking I tell you. She would not put the book down and give in to being exhausted. After 30 minutes, she succeeded in making it through the one book which I applaud her but man, reading with a determined, tired person is tough. 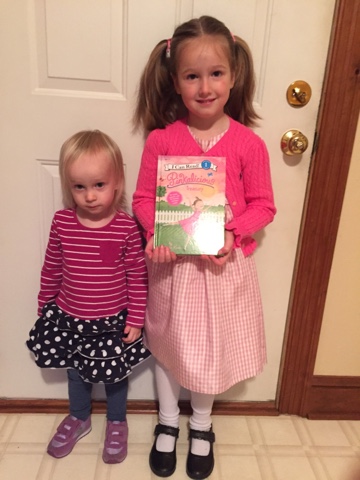 R refused to be in the pic

Later that evening we had family reading night which was the culmination celebration of the schools Read-A-Thon program...

There was lots of this going on... 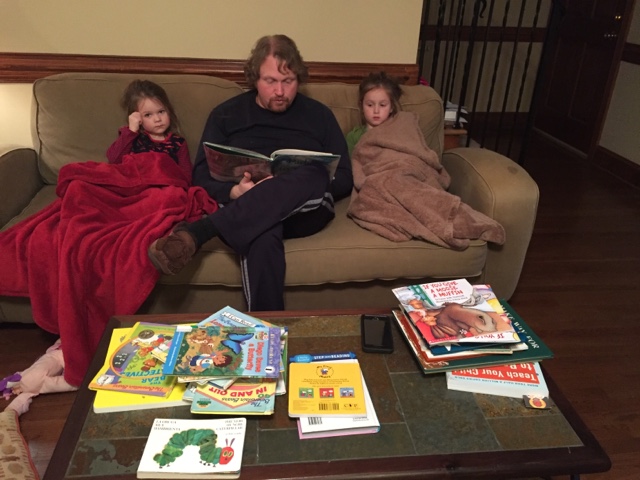 Papa has come into his own as a reader as adult - maybe making up for his not-so-love for reading as a kid. So he read ALOT with the girls. He read them Paddle to the Sea in one sitting - 75 minutes later I cannot say I'd recommend that long of a book for 3 and 5 yr olds. 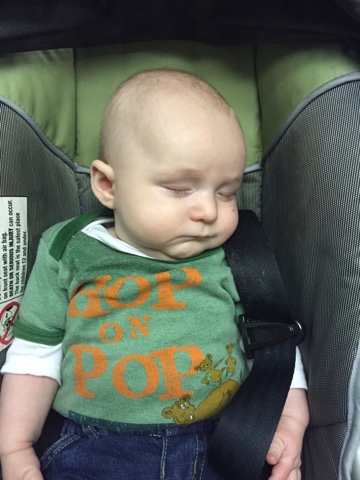 Side note, the kids who won the read-a-thon in the fourth or fifth grade read for over 1600 minutes! That's over 24 hours of reading in a week!!!

Also, Family Reading Night just happened to take place during the week of the book fair and occurred in the same place where the book fair was set up... Coincidental? 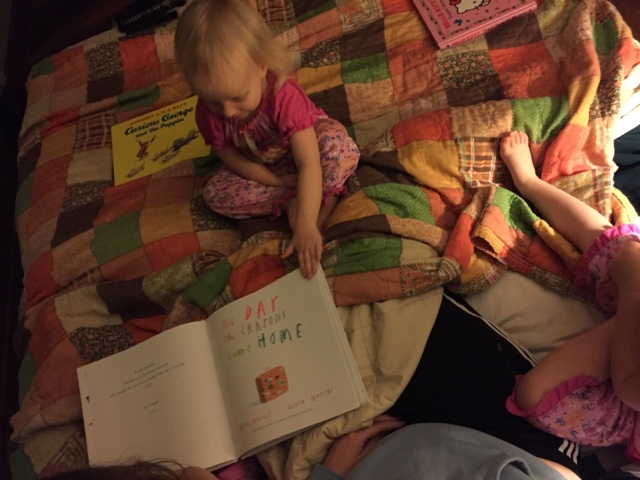 Anyhow, after hearing about how we needed the nail wraps???? (hello BOOK FAIR, not beauty salon) and Play-Doh - yeah we only have 30 cans of that at home, we browsed the BOOK fair. We got Aqualicious (because Pinkalicious) and a Fancy Nancy book plus this book 'The Day the Crayons Came Home' - honestly I'm not a fan. Maybe I was in the wrong mood reading it because it just seemed totally random and bizarre.

Also, while I'm in the children's book critiquing mode - How is it that the Pinkalicious I Can Read Books are Level One and the Easy Readers Disney Princesses are Level Two and the princess books have way fewer words per page (see #1 as to why I might be at all frustrated).

Also, all these Easy Readers and I Can Read Books don't do justice to the really good children's books that are out there like the NORMAL Berenstain Bears books, Francis, Corduroy, Dr. Seuss. Anyways I digress. 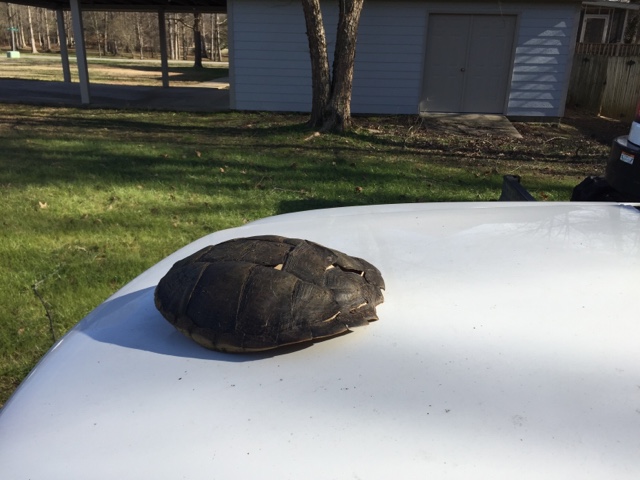 Because Uncle Kev dug up the one he found last year and brought it by our casa. When I was in Guatemala I remember seeing a guy who had one in tact and well preserved. This one is missing the bottom part and is already funkified a bit decayed but I have high hopes of keeping it. 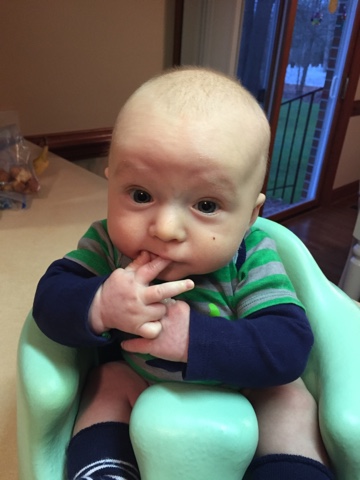 Not taking a bottle but sure is darn cute!

We had some random nice weather which meant the roller skates were coming out. 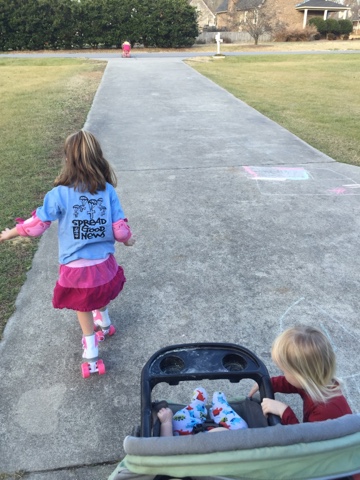 E is so determined to skate. I have GOT to get her some wrist guards. R had a fun time with them but wasn't so sure about going in the street.

I happened to think this is scary and hilarious at the same time: 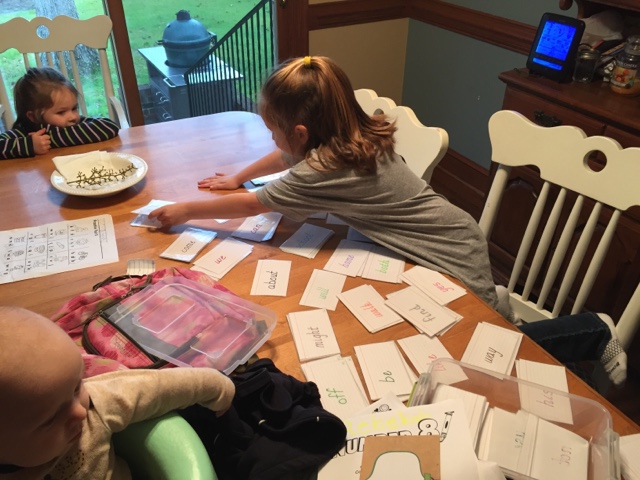 E is sorting her sight words into piles by list (just to be sure they are still there). She finished her sight words for the year a few weeks ago (praise the Lord because sight words + spelling words = no thanks). Hilarious? because that's what she chose to do after school one day during her free time. Scary? because I would have done the EXACT same thing and I totally wanted to organize them with her but I resisted and let her figure out the piles and matching them up by the color coded list number 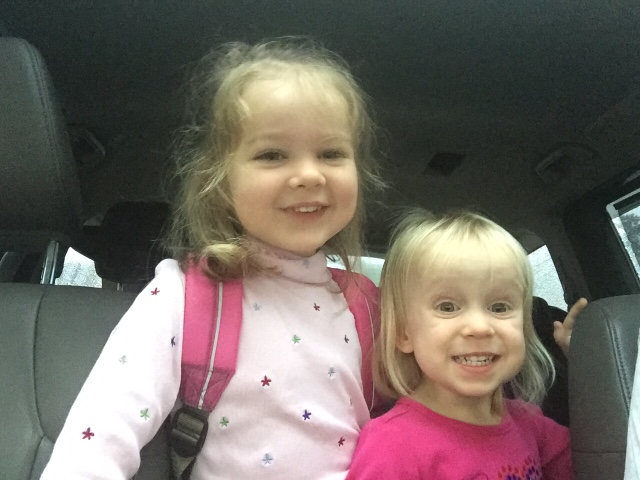