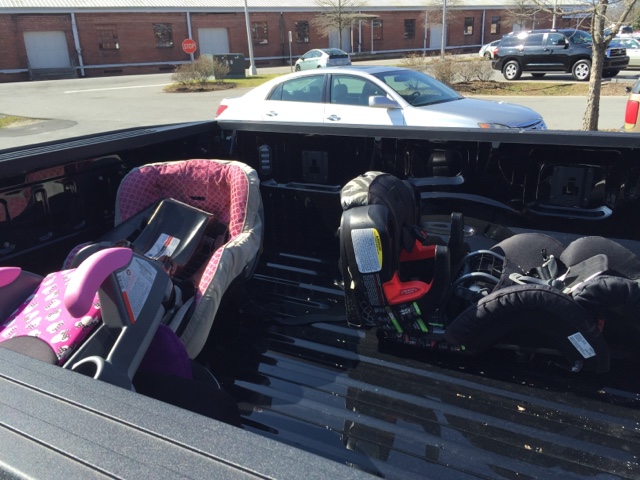 Ho Okey.... I heard from the insurance adjuster about the good ole van... nearly $4500 later hopefully we will be reunited by the end of next week. A bunch of stuff had to be replaced like the hood and the grill and some super expensive sensor thingy.

Yes, what about the 4 carseats that were in the car?

Oh you can go ahead and replace them with something comparable and just bring me the old seats and the receipt and I'll get the reimbursement going.

Two Britaxes and a 7 week old Diono plus the Baby Trend infant carrier.

There's a bunch of blogs/sites that have done 3 carseats cross posts - google it for yourself.

However with the two Britaxes in the third row - which are great seats and the click-tights are super easy to install - getting the Diono back there just wasn't happening - but I also didn't really give it a fair shake either. Apparently installing with the seatbelt as opposed to LATCH will spare a few precious inches.

I've been toying with the idea of putting the girls in the back so that will free up a spot in the van for carrying one person around. But I'm hesitant because that's a lot of energy in one row.

My thought is to get 3 Diono seats so that I'll at least have the option. I think I can get either the Radian or the Rainer carseats and be safe. There is this awesome orange Pacifica that R liked but the color got bad reviews and the Pacifica didn't get good booster reviews so no orange carseat for now. Also E FREAKED when I told her we'd have to replace her carseat but then she announced she wants a blue one. I'm thinking I can get away with Radians or Rainers - even though the Radians are the only ones depicted as 3 across (Rainers are 'space savers').

I need to get another bucket infant carrier for A. I have always loved the Baby Trend for the triangular handle - which is nice for lugging it around. I'll probably end up with another Baby Trend because we have the stroller.

I shall keep you posted