Let's see the last place I left off was here... 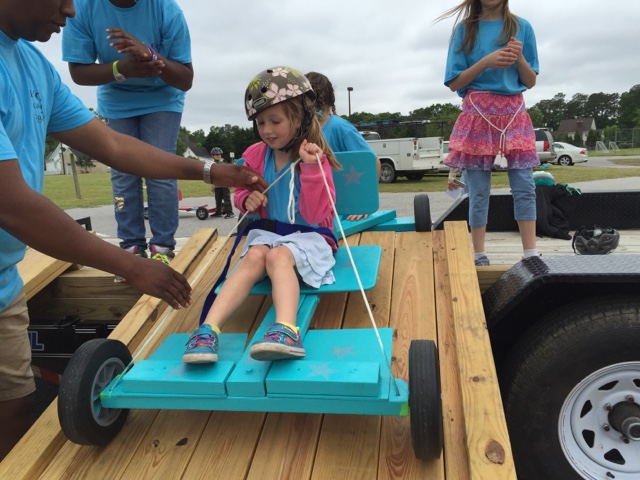 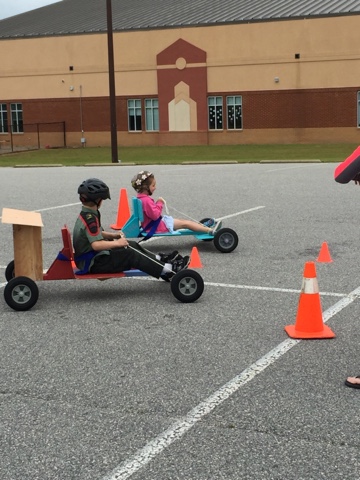 E had fun during her two races 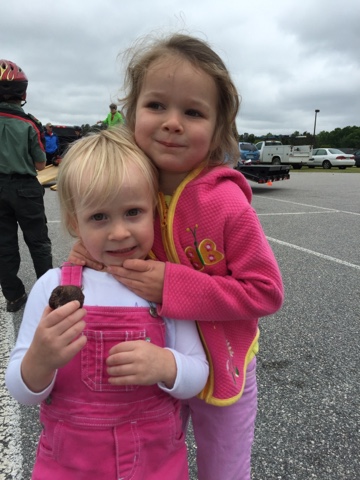 R and M enjoyed the donuts and watching some. It was mighty cold for April 30th which was a bummer and even more of a bummer was the church was locked and so there were no bathrooms : (

Other thoughts on the Soapbox Derby:

1. There is very little strategy involved
2. There is lots of teamwork in moving the car back into position once a driver has run the (short) course.
3. I think I still prefer the Pinewood derby cars and races like Uncle Kev used to do in Cub Scouts. It was way more hands on and a lot more fun to watch and there was a clear winner in the group.

After the derby we had an intensive Saturday laundry day... As usual 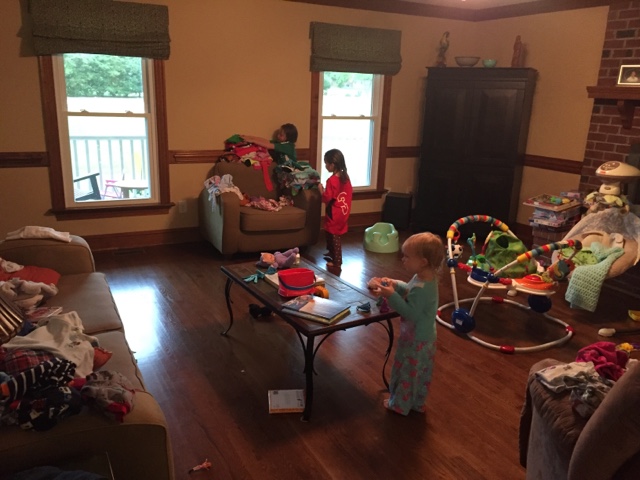 Now that the big girls are upstairs there is a but more work involved in the transportation of their clothes and they've been read the riot act on putting the clothes neatly in the right drawers. 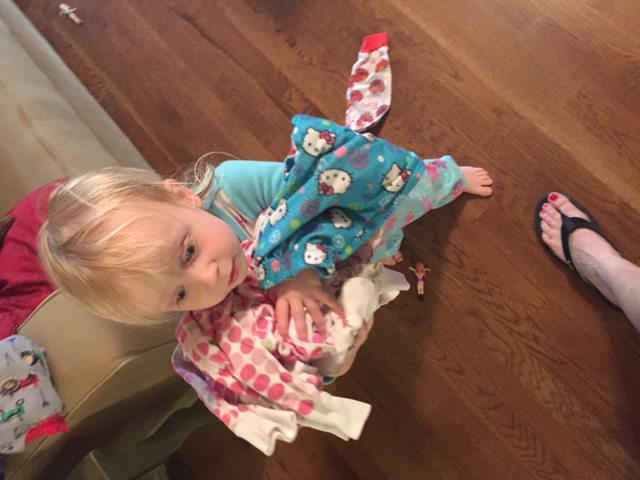 M on the other hand just ends up with balled-up clothes in her drawers but is the most eager to 'be a helpa' so wrinkly pajamas it is. 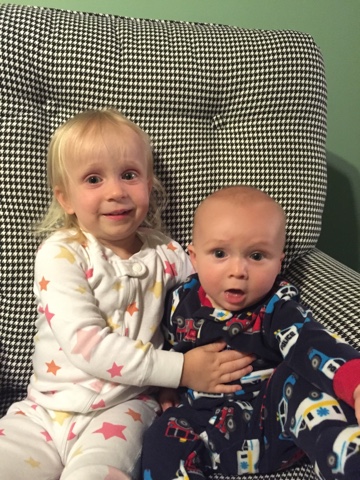 M loves A so so so very much but when he sits in her lap, he practically knocks her over. 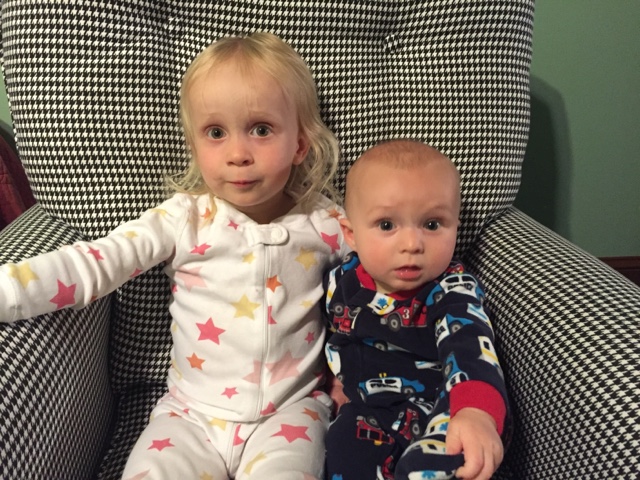 They were did not participate in our family activity that I need to post on but they were excellent observers. More on that later?

Then the week was mostly a blur of the normal - AHG, soccer, work, school - normal-ish, boring-ish stuff.

Then the weekend brought Mother's Day: 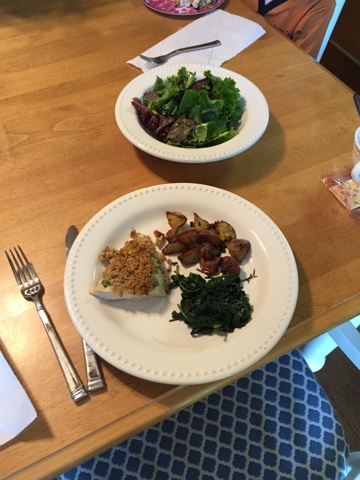 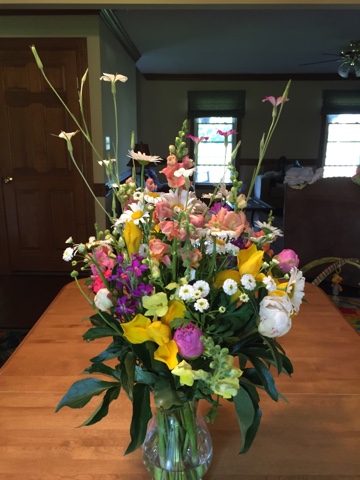 Sunday we have a massive joint Mothers Day celebration with Jibbe and Grammy and cousins in Raleigh. I think it was a success and a fun time for everyone.

I opened a number of beautifully decorated cards and some sweet projects from school. E was so funny about all the stuff she made for me. She got this MASSIVE Christmas bag and put all my things in it so I couldn't see them. It was precious.

And then my thoughtful one turned a whole six years old a few days after that! 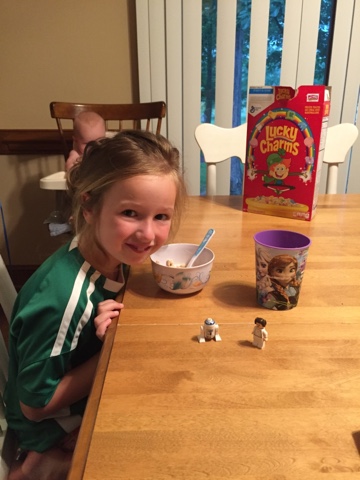 I put out an ISO on FB for Star Wars sets with Leia in it that don't cost 1.5 millions dollars.... Death Star, cough, cough. Well my cousin who shares the same name as E came to the rescue and mailed not only Leia but R2D2. The packaged came the day before and I let E open it before breakfast and she was super surprised and way happy.

Also, she wanted Lucky Charms for her birthday breakfast instead of waffles or pancakes - probably because I've messed up pancakes too many times before BUT she insisted on Lucky Charms. Which kind of annoyed me but hey it wasn't my birthday. We finished the box yesterday and she declared she wanted waffles next birthday. We will see if that holds true.

Finally on her birthday, she got to go on a field trip - so zero seat work on her birthday. WooHoo! I, unfortunately, couldn't go because you know - work, younger siblings, the hour long drive, all day - I don't like missing field trips but so it goes. From the pictures, I know she had a blast.

We sang happy birthday with just our family that night before rushing off the AHG but I have a story to tell about her present so maybe next time.

E came home with a bug project and this is about how it went down... 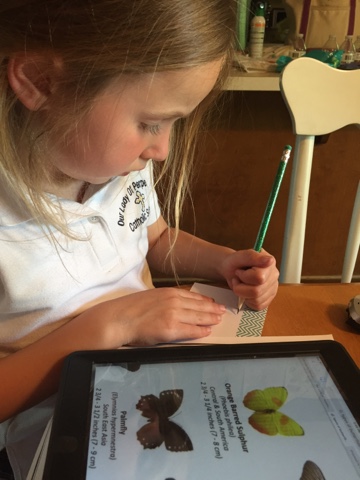 Make a model of a bug. She wanted to do a butterfly so she looked at pictures of butterflies and decided on the Orange Barred Sulphur (which lives in South and Central America but can be found as far north as New York - who knew!) 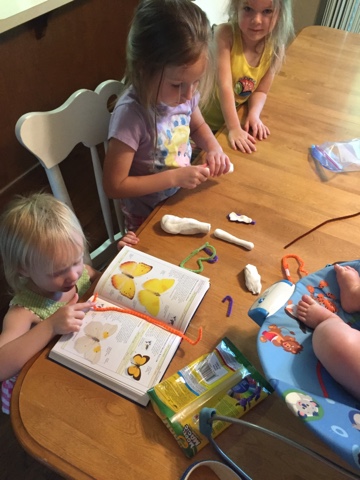 The model had to be 3-D so I was searching for some creative outlets for the girl who loves crafts. Seriously I decided I made a serious error in judgement and promptly had Papa exchange it. 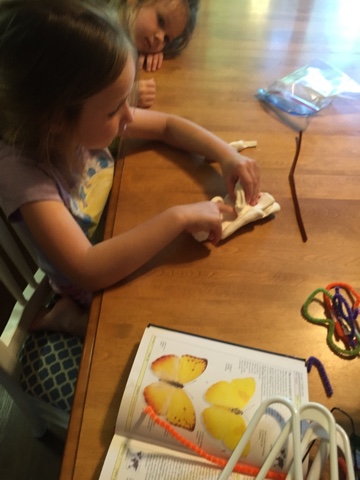 E made a couples casts of the butterfly with pipe cleaners but abandoned those because the Model Magic was sticking to them. 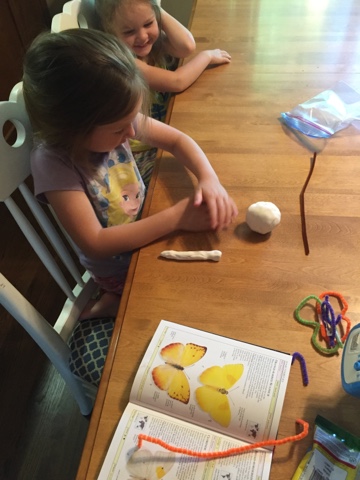 After she played with it for awhile, she got down to business 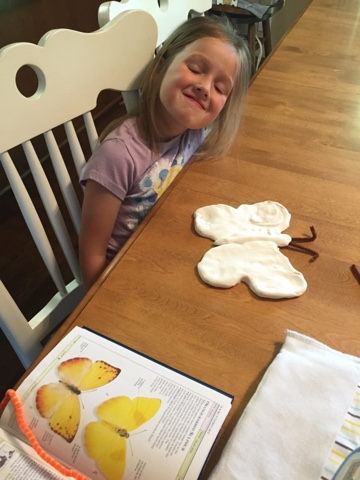 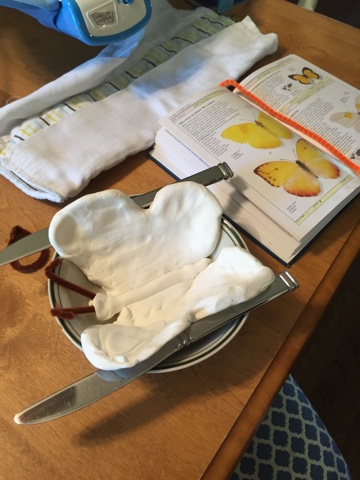 Now it just had to dry for 2-3 days!?!?!?! before it could be painted.  We were hoping it would dry in the shape it was sitting but I think that is where the modeling clay would have been better 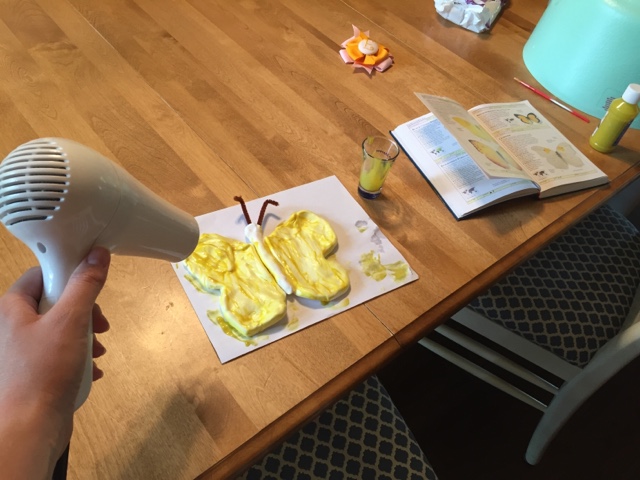 Sometimes I'm legit worried about catching something on fire or breathing in the fumes. 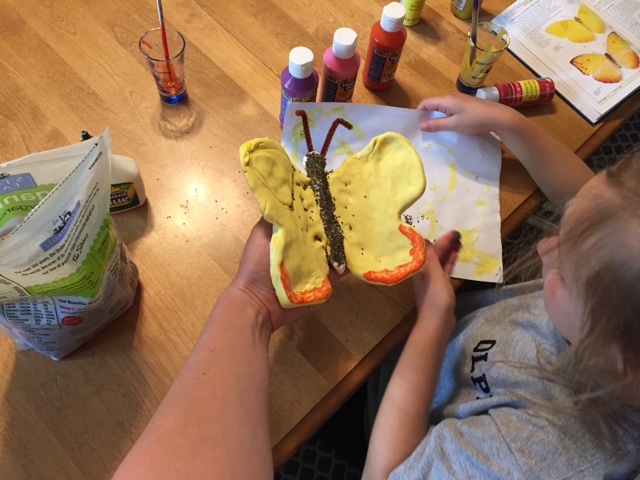 Chia for the black parts of the butterfly? Chia on my floor for a few days! 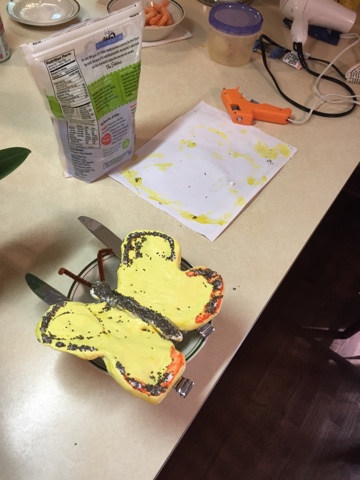 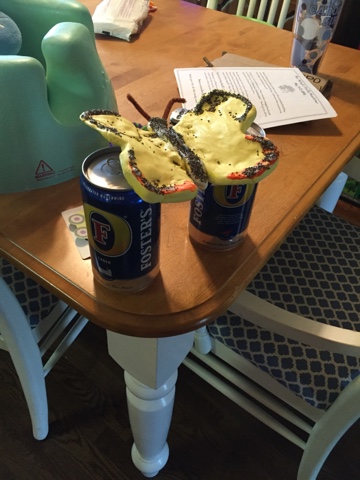 No you may not bring your model to school like this. Please find something else it can 'fly' in 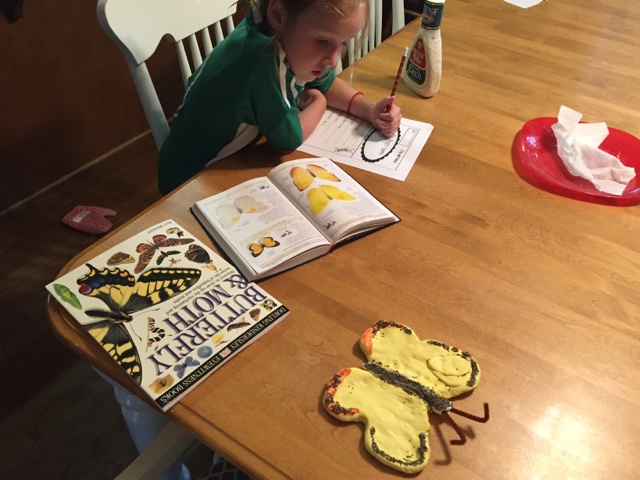 E is so literal that answering the question - what do you and your bug like to do and where did you find your bug - were comical. Look at flowers and on the Internet? 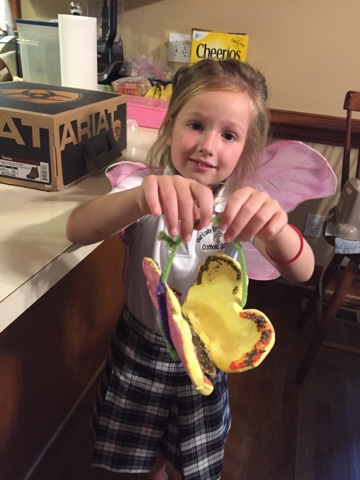 On the day of all the painting this is what the kitchen looked like at 5:30: 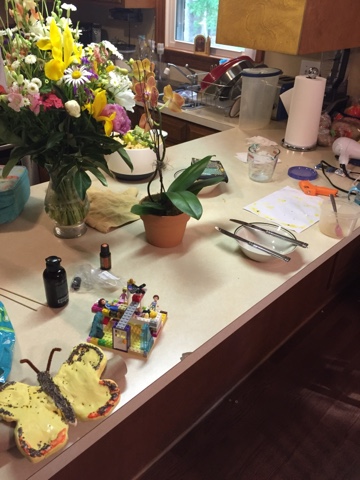 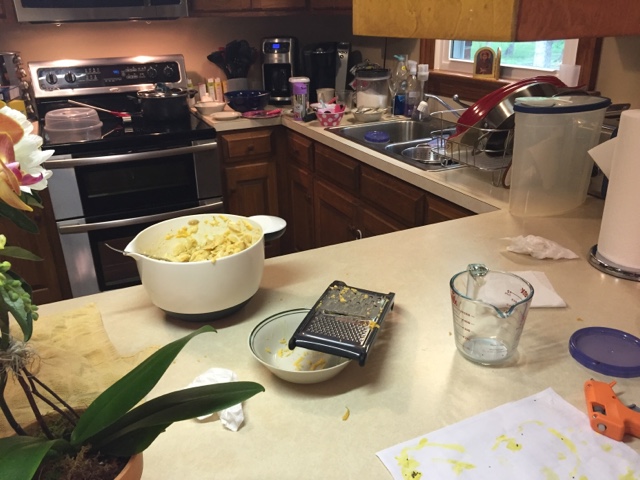 Project stuff, dinner stuff, breakfast and lunch dishes, mothers day stuff, the Lego topper for the birthday cake later in the week, a dishwasher that needed to be unloaded. The works.