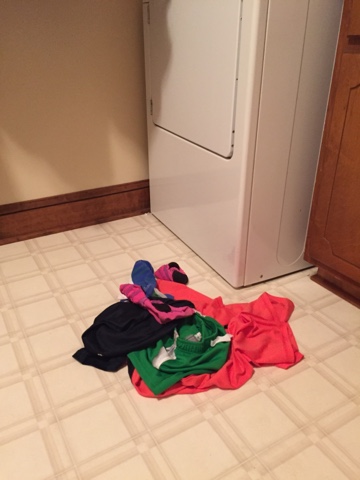 A few weeks back I had a rough time at soccer practice. Well actually that would be more accurately described as my children made me want to bury my head in a pile of stinky soccer clothes.

Oh my goodness it was rough. I think both R and E were tired -but they did have full bellies because I know we need fuel to make it through. I don't even really remember the circumstances surrounding the drama. I can tell you that with six 4 and 5 year old girls there's lots of drama. Drama over ball color, drama over whose hand is on top when we do our cheer, drama over who is partnered with who. DRA-MA. Totally normal. I get it and can usually deal with it.

Lee was at the swings with M and A. Then something happens with E. Like meltdown mania over something silly. Tears. Screams. The works. I think she is going to power through to finish what we were doing but then she can't. She just can't. SO off to Papa and the entire park can hear her howling the whole way.

Sigh. Scream a little louder kid, will you?

Then it was R's turn to meltdown. Now R is still just 4. A young 4. She still doesn't like the ball being taken away from her and she moves and shakes at her own pace (on and off the field) - okay I get it but this season she's been doing a lot better with things. But not tonight. Who knows what exactly set her off but something did and the tears began flowing and she is the type who cannot be reasoned with when she is emotional.

Can we just all go home, now?

All the while there are 4 other girls who I'm trying to run practice for as this background drama of my own children is taking place. I'm torn between having to parent my children and coaching my team. I expect my children to behave/participate/whatever for the duration of practice - as I hope they would if I was not their coach. But my children do not have the benefit of me sitting on the sidelines during practice watching them monitoring what they are doing and being able to pull them aside and IMMEDIATELY correct behavior if needed.

In fact, on this particular night I think all but one of the six players needed a little extra parenting. Full moon, maybe? I don't know what it was. But that doesn't give my kids a free pass.

After a talk with Papa, eventually they pulled it together - barely - and we scraped through practice. Then. Then. Then. E and R asked if they could play on the playground.

Not after that performance. I pretty much read them the riot act in the van home. If you EVER, EVER behave like that again I'm not coaching next season. It is embarrassing. It is not fair to the other players on the team. Need I continue? Would you EVER do that for your teachers at school? Then why would you behave like that for me? You all ought to try to "let it go" like Elsa and not sweat the details. And you guessed right, no dessert.

I laid it on the line. But my mom ego was totally deflated. I mean if my kids are going to meltdown I prefer they do it at home and not on display for 100 people. However, I know the other parents on the team (and in the park) knew exactly how I was feeling because their kids have their moments too. Parenting is hard. You never know the moment you kid is going to throw you a curveball. Sure it is easy to talk about the great things they do, and their successes and the good times - because there are lots of them but it is the trying times that really cause me to reflect on how I can parent better and how I potentially avoid situations like this again.

Well the next day the girls redeemed themselves at our game. Their behavior and effort and attitude was more than good. So I'll dig myself out from underneath the pile of stinky soccer jerseys and hold my head high knowing/hoping/praying that I'm doing the right thing in the parenting ball game.
soccer things i think