I likely owe some explanation about the blogging silence (no not pregnant because isn't that what the first assumption is). I think I mentioned a few weeks ago Lee has diverticulitis and it is not clearing up in a timely fashion so he (and I on occasion) have been going to the doctor (or ER!) at least once a week for the past 5 weeks. It is exhausting. It is expensive. And I'm praying that next week after another (different from CT scan) test we will have more answers and hopefully an action plan to get him back to normal.

Aside from that, work has been busy enough to the point I need to log on and finish in the night or get a head start in the morning hence the blog takes an unfortunate turn to the back burner.

Fear not, I have decided to restart and blog - only about 3 happy and stressful days of last week because totally catching up would take too long.

To kick off an already knowingly stress-filled evening we headed over to our favorite pumpkin patch to take C's obligatory pumpkin pick. All the kids have worn this costume on their first Halloween and I wasn't about to end that streak even though it was Halloween. 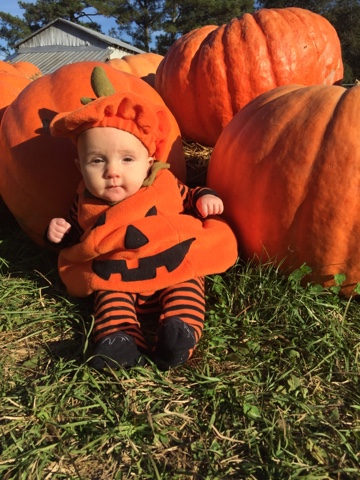 It was pretty go-go-go because there were other things to do like carve the pumpkin but we got a good one and that's about all I care about. I do feel bad because there were animals there that A would have LOVED to chat it up with them but we were moving. Next year hopefully I'll remember and we can go there before 2 hours before it shuts down for the season 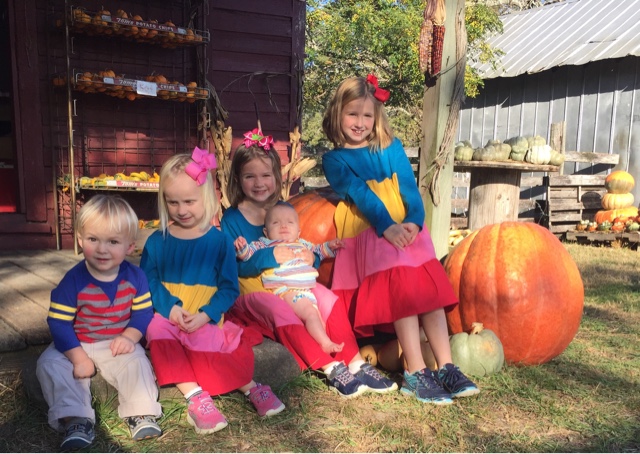 I took a fall pic because I'm a glutton for punishment. And it was a flop. I really don't love any of them plus E has no business wearing that bow soooooooo..... Kibbe kids be warned you had best step up your game come family photo session (yes I finally took the plunge and have a date set) plus Christmas card pics.

I love this picture so much.. 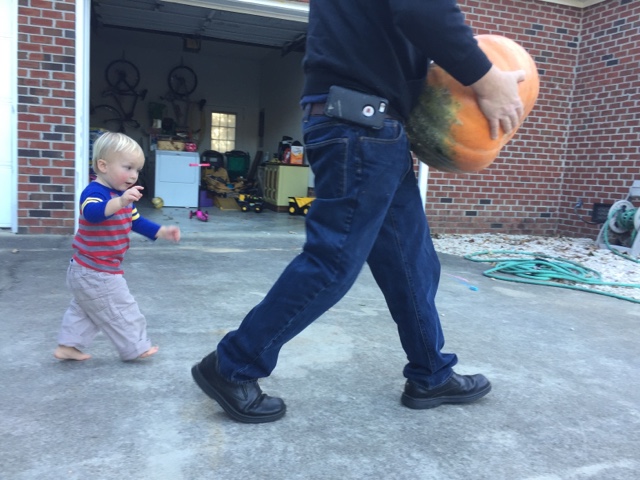 It pretty much defines A. Love my boys : ) 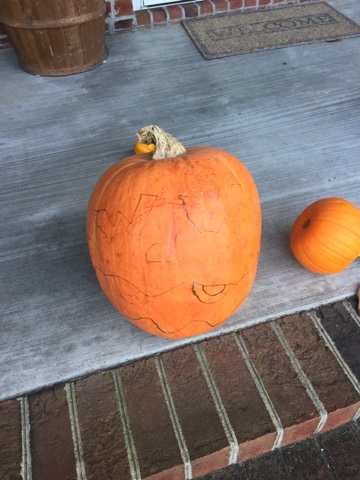 E told Papa she wanted letters on the pumpkin... He said no. She lost it. I interpreted... Her OCD shines because the letters are the first letters of the characters they dressed up as. The S and P are in the mouth... I PROMISE! 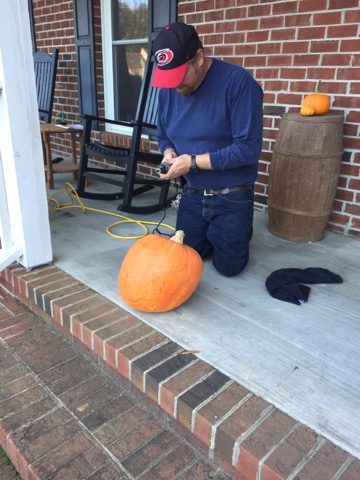 Dremel drill for pumpkin carving for the win 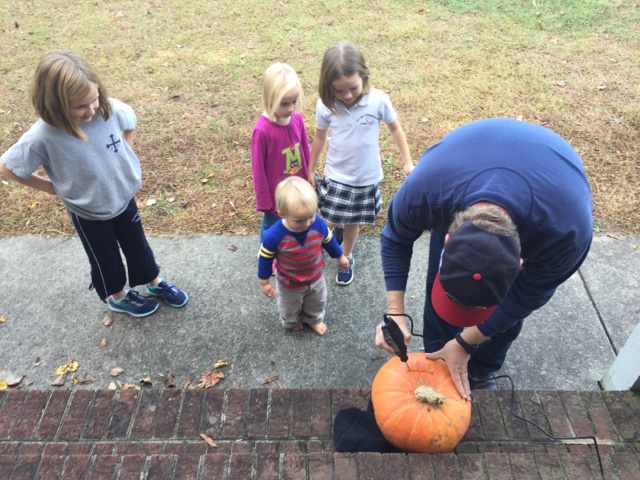 Pretty much the coolest papa EVER 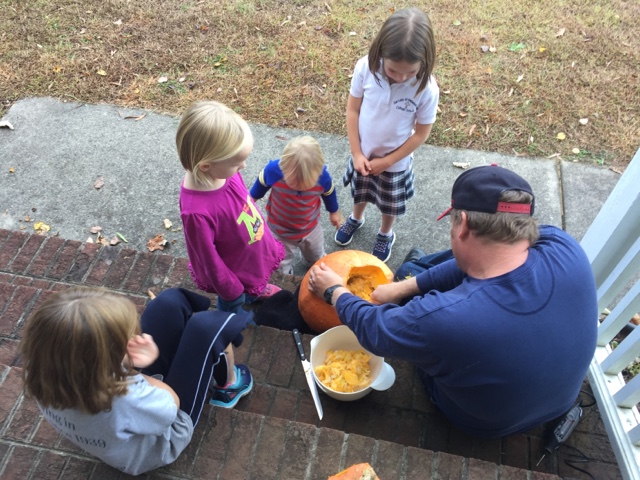 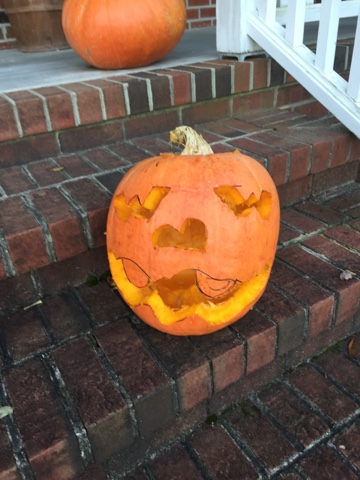 Next year I really would like to make an effort to 1. get to the pumpkins a few days before the pumpkin patch closes and 2. have a pumpkin carving family contest 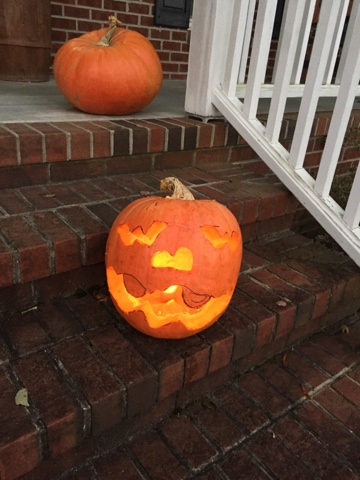 I need to buy some of those pumpkin reusable candles things from Amazon... Like right now! 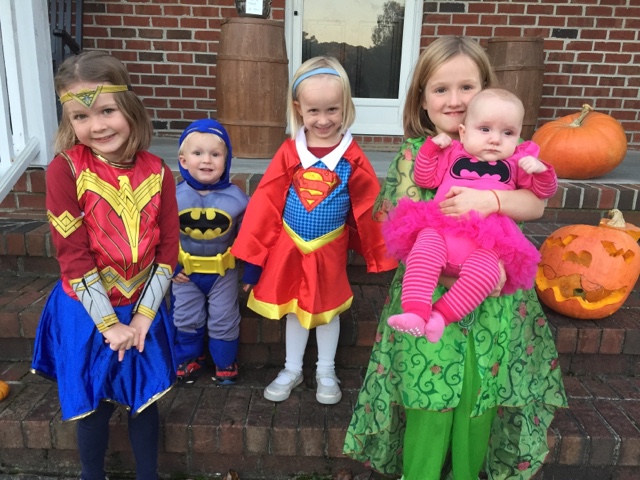 Wonder Woman, Bat Boy, Super Girl, Poison Ivy, Bat Girl... I need a book with a halfway decent storyline so my kids can learn who they dressed up as 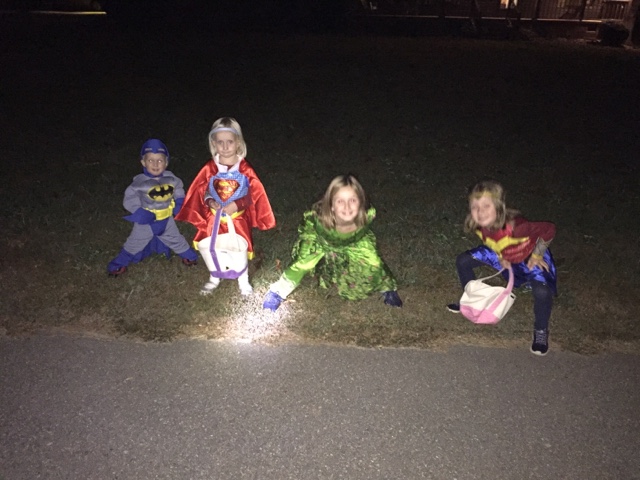 I'll tip my mothering hat on this one... I dumped Papa and the walkers off on the next street over around 6 pm. C and I met up with them as we all cut through back to our street - the other street was much better in the Halloweening department 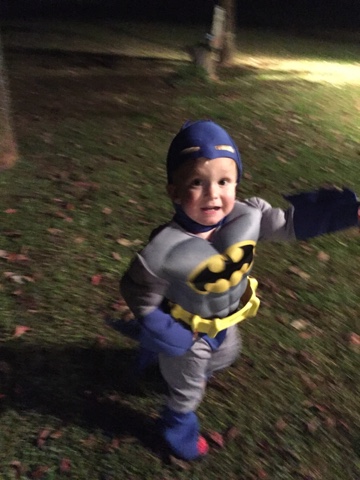 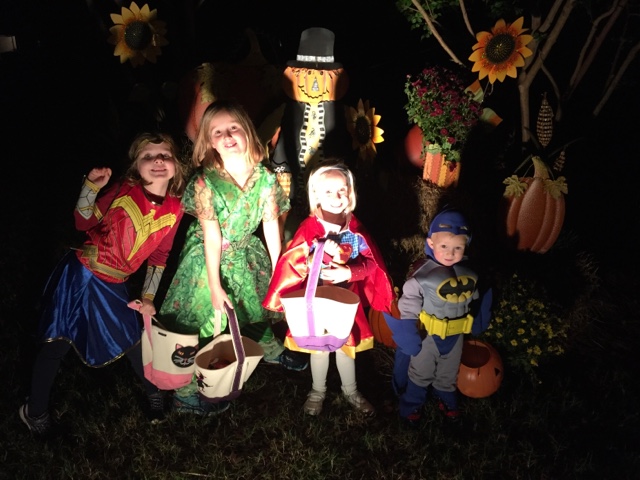 In a neighbors yard! 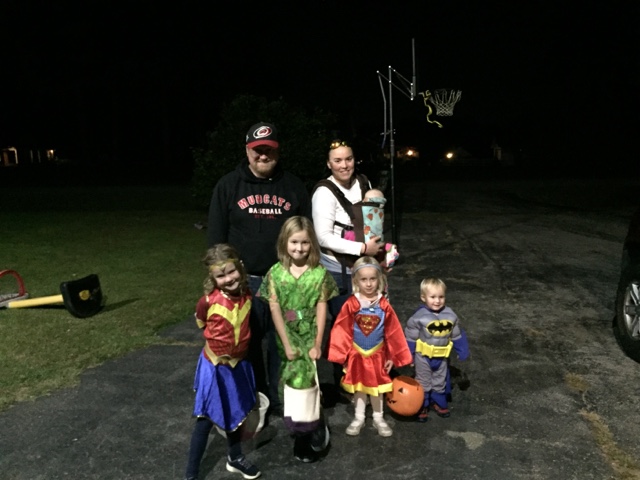 Thanks for our neighbors for taking a group shot! 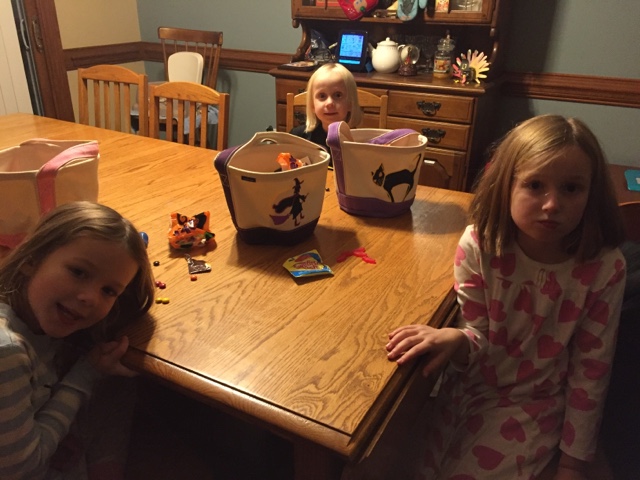 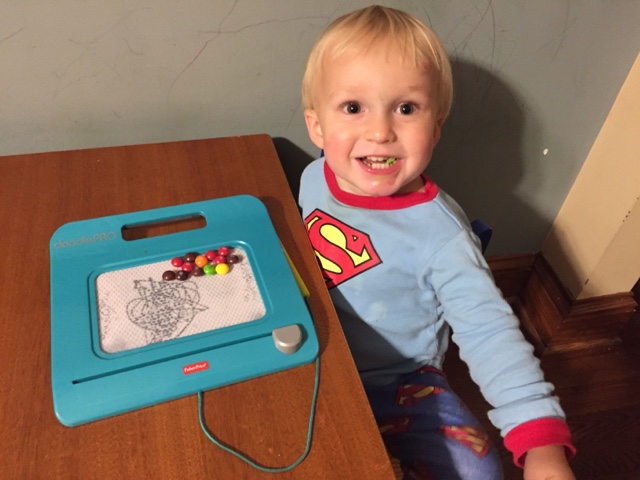 A had no idea what was going on most of the time but knew something was up. He went back and forth between riding in the stroller between houses and not letting me help him with his candy bag 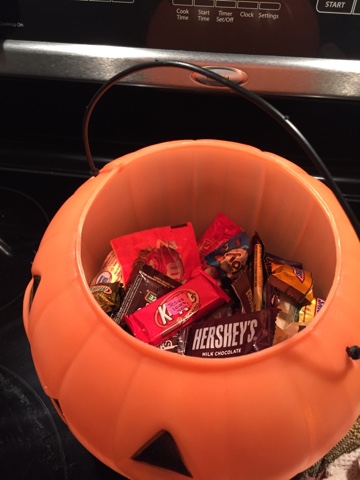 So much to say about this... I need a soapbox 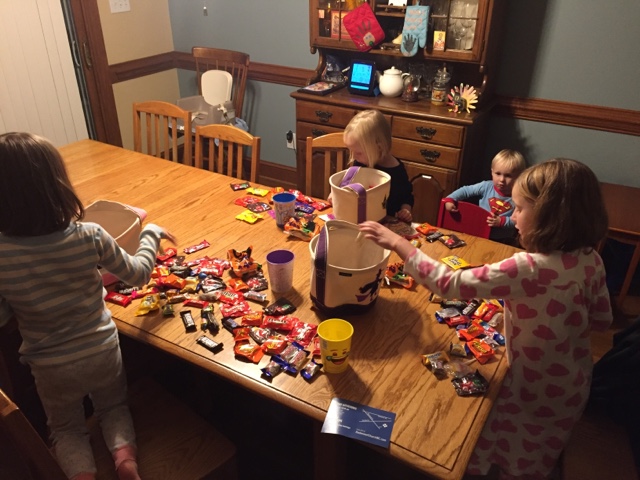 Lee insisted I take a pic of the taco salad he made for dinner... 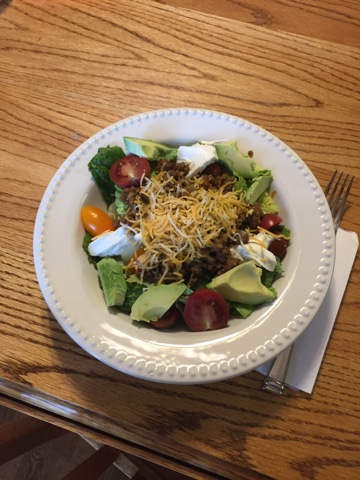 That would have cost at least $12 in a restaurant.

R got the taco all over her school uniform and I contended with that this morning which was super annoying... I guess that's my own fault for only having the exact number of polo shirts she needs for school!

Bleach is in order this weekend

The day after Halloween is All Saints Day which can be a little hairy for Catholic school moms. Two costumes in 15 hours and there's lots of hype surrounding both. Plus the sugar high from the night before and the pressure on the day of.. 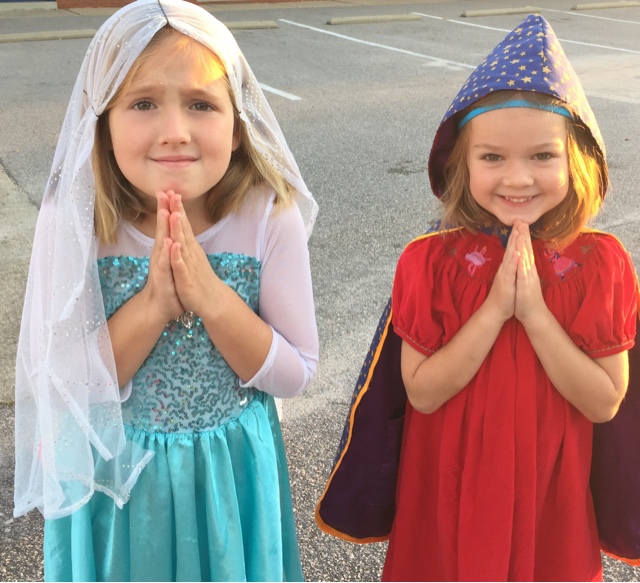 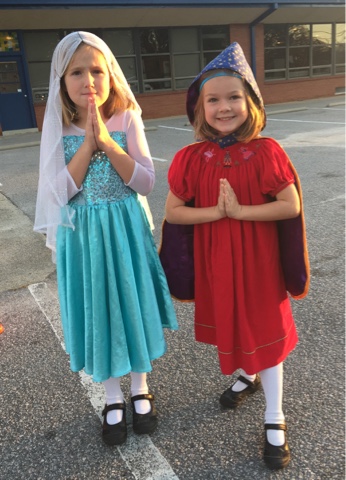 E was super pumped about her costume because Our Lady of the Snows is the PERFECT Elsa match up. We didn't tell anyone about it It would probably be helpful to see the snowflake on the front of her dress - anyone got a good icon of her St. Nick can bring? R is Our Lady of Guadalupe. I totally could have stepped up my game on the dress but I didn't because $20 for another dress?

When she got home from school and read through her saint-a-grams E announced she is going to be Saint Teresa of Calcutta (Mother Teresa) for All Saints Day 2018, I was like HOLD UP!!!!!!!!

You cannot plan your costume for 364 and 8 hours in advance.

A day late (really) and a dollar short (not really) we celebrated our 9th anniversary. 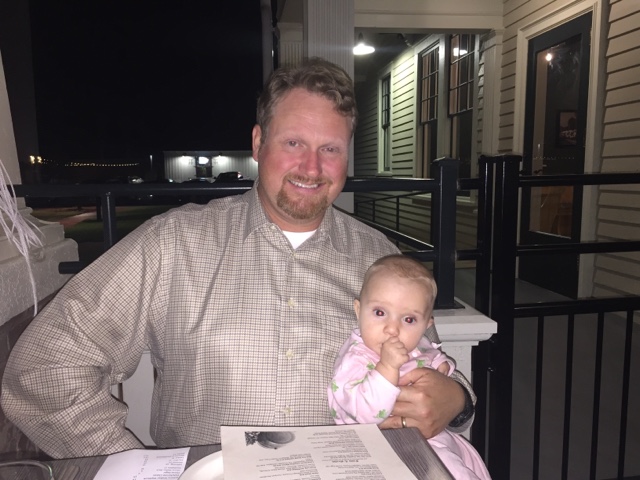 With C of course 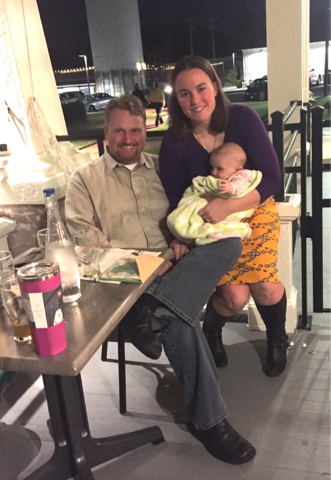