For the Four Year Old 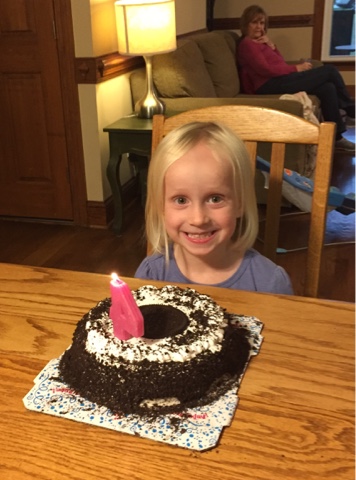 Crazy I know but she's been itching to hang with the big girls for a long time. A few things about M. To date, she's our only confirmed righty. She loves doing puzzles, playing with Legos and Barbies. She has a really sweet group of friends at school which I am trying to soak up time with them because before you know it they will be in preK and then moving on to different schools. She's also got a great friend up the street who she'd play with EVERY DAY if she could.

M is currently the middle child but isn't the typical middle child. She won't be forgotten and let's her voice be heard unless she up to something mischievous - cue throwing lunch food away in the trash and other things she doesn't fess up to but we have our hunches (innocent until you admit it around here). She'd much rather be playing upstairs with E and R than playing with A. A knows how to push her buttons and he thinks it's hilarious to bear hug her which nearly knocks her over.

When asked what she really wanted for her birthday she said "people can give me whatever they want to give me".  I think that sums up a lot about M - most of the time she's happy with or doing whatever. She a really happy kid with some spunk. I think she'd like my to believe she's the quiet one at school but I happen to believe she's much more bold and brave than she makes out to be.

She shined on the soccer field this past season which was fun to watch. Dramatic at times but fun. I think she'll have a blast swimming in the summer even though she doesn't think she's going to do it (sorry mom has other plans).

Something I will remember from this birthday is this. M and Jibbe went shopping for her present and M saw this necklace and bracelet and she wanted it. They ended up not getting it because do 4 yr old really need jewelry? Well when M opened one of her bags and the bracelet and necklace she had her eye on were inside - she freaked out. It was cute and was one of the best and fun reactions.

Happy birthday M! keep being that happy, spunky girl who keeps me thinking.
at November 09, 2017