Let's see if I can knock out these 7 updates in a semi-timely manner...
So about six weeks ago I was very pregnant with baby number 7. Lee was still very much - and still is - in the throws of an insanely busy pool season. My doctor was on call on the 27th so that was the day I signed up to get induced. (I've been induce the last five times so I figured induction was inevitable - and I found out my doctor was on vacation the following week - so I would have rolled the dice with on call drs so whatever)
We did the normal leave super early for the hospital - C and J both happened to wake up right before we left. C probably because she knew Jibbe was coming and J probably because he knew I was really sad to dethrone my sweet, cuddly baby boy.
All the normal hospital things - questions, IV, pitocin. I was pretty on the fence about an epidural. I'd never had one but after C's birth I think there might be some PTSD from the whole thing. I talked to the nurse about it and she was really helpful and not pressuring either way. We got to walk the halls with the the IV and did so for about 2.5 hours. I made my final decision about the epidural and got it before lunch anticipating that this birth would be similar to Js - who was born before noon.
Well that didn't happen. My doctor came in at lunch and I was still only 1-2 cm which meant all our walking/pacing/making circles in the halls was basically for nought. He asked why I got the epidural (so early) and I told him I was tired (and tired of being in L&D) and I just wanted this whole thing (labor) to be done.
Insert all the laughs.
Now for my thoughts on the epidural. I think everyone talks about the stick being terrible and then it being dreamy after. Well for me the stick was not terrible ( the antibiotics they gave me every four hours through my IV burned waaaaaaay more terribly than the epidural). Then the numbing sensation came but not complete. I kept on asking the nurses if I should feel this way or that way and I kept reminding them that despite this being #7 this was epidural #1.
By mid afternoon I was beginning to question if the epidural was really working because I was still feeling more of the contraction discomfort - not bad but still noticeable and I thought some women sleep after getting epidurals? So the kept asking the nurse if this was normal or not and finally she decided to page the nurse anesthetist who did the epidural and she put some thing thru the line and there was immediate comfort/relief for about 20-30 minutes. Then the contraction pain started again.
At that point I was convinced I was never having the baby and I'd end up with a c-section - because this labor was going longer than any others and I JUST WANTED IT OVER.
So the anesthesiologist came to check the epidural because I think my L&D nurse was getting the point that she thought it wasn't working. He said he thought the location and everything was fine but decided since I was already sitting up he'd do a second one. At that point I was worried about the needle and not being still enough if a contraction happened. So the timing of epidural #2 was great as was the actual epidural. I don't know if it was the placement of it - I assume it was - or if they also upped the flow of medicine - but it was fantastic. The anesthesiologist stayed more than a few minutes to make sure I was good to go.
Then all was well. At some point in the late 4 pm hour I told my nurse I thought the baby was coming and my doctor was in for evening rounds and confirmed that yes I was ready and then everyone left - I swear everyone left for at least 5 minutes. It was so weird. So not like previous births when I tell them it's time, everyone jumps into action. I guess that's the difference between an epidural and non-epidural birth.
Obviously everyone came back and after a few pushes 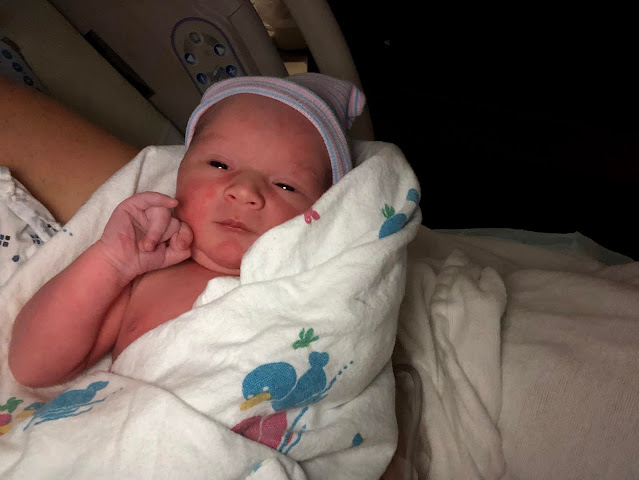 Hannah Helen
Hannah was born. We weren't surprised that it was a girl. A was really gunning for a boy but the big girls switched from team boy to team girl at the beach when they found out that there was a girl cousin on the way (baby cousin decided to make an early appearance so she could all the prayers) 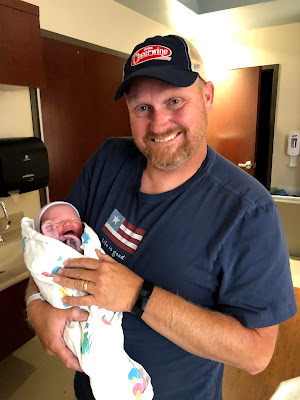 One of the more striking things about the whole hospital experience was the anesthesiologist came back - right as H was being weighed and evaluated - just to see if the epidural was working. It was so refreshing to know he cared enough to came back - and I bet if the epidural wasn't working he would have fixed it. 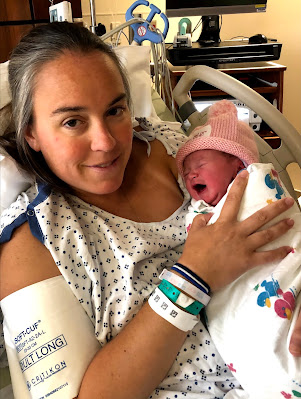 Hello exhaustion
We FaceTimed all the siblings since the visitor policy at the hospital was different because of COVID and I will say we'd probably FaceTime again if there is a next time - it was so much easier, especially for the grandparent who did NOT have to load everyone up and drive and traipse through the hospital for a 10 minute visit. 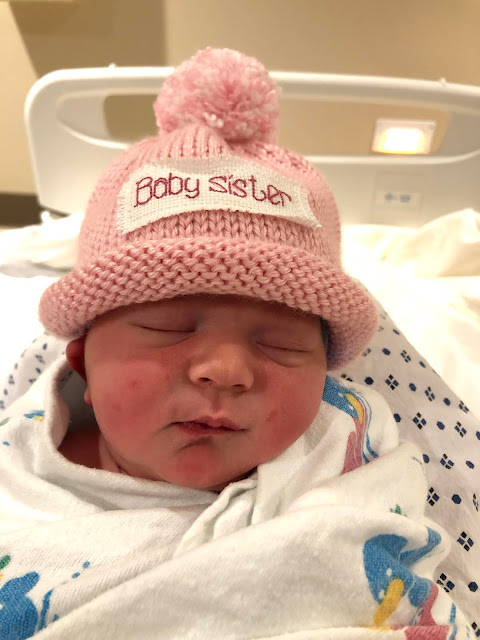 Lee went out and got dinner and we celebrated with chicken sandwiches and milkshakes. I got settled into the mother-baby room and my nurse said something about being here two nights and I said, no I'm leaving tomorrow and she said well you were strep positive so you'll have to stay two nights. All the eyerolls because I got more antibiotics than ever - I was getting out of dodge. The rest of the night pretty uneventful night expect at 2:30 when the nursery nurse came and told me H's glucose level were low and we might need to talk about supplemental feeding... Insert all the me trying to be as polite as possible with it being 2:30 AM and just having a baby. Then there was a discourse about since I had gestational diabetes... blah blah blah. Which I reminded the nurse I didn't but then she told me that since I refused the 3 hr glucose test then I was being treated as if I had gestation diabetes - me eating all my words because that's exactly what I told my doctor 2 months before - just treat me like I have it. But I did not know that baby's glucose levels would be monitored after birth. Guess who would be take the 3 hr glucose test because that'd be way easier than getting into with the nurse at 2:30 in the morning.
The next day was a long day at the hospital because she was born so late in the day. We finally got the nod to leave right in time for a massive rain storm that Papa courageously ran through to get the truck. He was soaked for ride home.
Everyone was excited to meet baby sister. J has been the most interested in her and looks for her when she cries and definitely pays the most attention to her. C kept asking if we were going to keep her / how long was H staying.
at September 05, 2021