Answer Me This - Fairy Rings, Soapy Mouths and TV shows 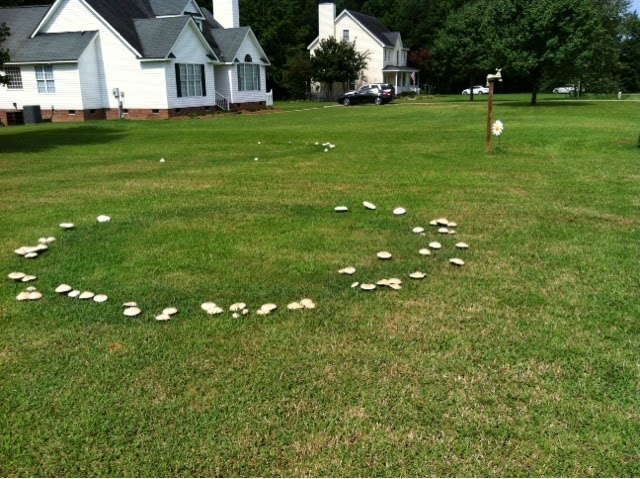 Mushroom circles anyone? We've been having a weird week around here and the lawn is apparently no immune. Last week everyone was just a little off. E wants to go back to school. R is 2.5 yrs old so that means everything is glorious or the world is ending at any moment in time. M is desperate to pull up and get into stuff. I don't know it's been weird. Oh and E called R 'stupid' so I washed her mouth out with soap to make a point (because she had a warning about that word about 7-8 months ago). She freaked so I think the point was gotten. I felt really old school and kinda bad when I was doing it - though it lasted for all of 12 seconds maybe. I mean I don't remember having my mouth washed with soap. Any one else do this? I cannot say I would do it again but seriously blatant mean-ness is not tolerable.

Also we went to church Thursday and did not pack up into the van until 9:45. Yes in the P-M. A solid 2.5 hours late for bed. The girls did not seem like they were going to fair well - which I was giving them a nearly free pass on behavior because it was 6:30 on an off week to begin with but then things got better and one nice lady took M so that freed up my hands - which is always welcomed by R.

Anyhow the winds of weirdness be gone… We headed to Raleigh for a weekend full of activities which was super fun and exciting.

1. What is your favorite room in the house?

Hmmm.. I kinda like my whole house especially after last year's reno. Except for the garage because I found a snake in it once and now I cannot go out there without reliving the moment.

2. Do you subscribe to any magazines or other periodicals?

Funny you ask. We just got our first National Catholic Register in the mail last week - it is part of a trial. We still have not decided if we'll keep it but it was neat to get.

Lee gets Our State magazine which is about NC. That is usually a good one.

3. How do you feel about the sign of peace in Mass? Enriching? Awkward? Overdone? Just right? Some combination of the above?

Hmmm.. yeah. We don't do that in the DL but when I do go to Mass it is only awkward because I'm not used to it anymore and my kids are totally clueless about it so yeah.

4. What is your least favorite sound?

M's screaming has recently hit my nerve in the wrong way. She's on a screaming-in-her-crib-before-rest-and-night-time kick and it drives me cra-zee. I cannot listen to it because I feel bad that she's crying but I know she's tired and it makes me want to snuggle her up (and sometimes I do). But then I realize I should not complain because Morgan's boys outcry my girls every day of the week (so say a prayer for them!).

5. What was your favorite TV show (or shows) growing up?

6.  What are your favorite TV shows now?

I hate to say because as soon as we find a show to watch together it gets canceled or weird or something happens and I don't like it.

- 19 Kids and Counting - don't agree with some of their principles but whatever
- The Great Food Truck Race - one of the only shows we'll watch on the Food Network and it is only 6 episodes a season
- Downton Abbey - Loved it until the car wreck and my favorite character was killed off. I have not gotten back into it since
- A Beautiful Mind - Was on for a season and got cut
- Person of Interest - We religiously watched this and DVRed and everything but then something happened and things got too weird and creepy and that got axed

Email ThisBlogThis!Share to TwitterShare to FacebookShare to Pinterest
Labels: answer me this