You know you have a snake in your garage when...

May 28, 2014
Okay… In case you missed last week's installment of all things snake, you should check it out because we are up to 2 snakes in 8 days in our yard. For all you non-math people that is one snake every four days or in my world ONE TWO SNAKES TOO MANY!

Now, while the girls were getting their rest on this afternoon I was going out to the garage to look for something on the other side of the van. Except I heard this whoosh, whoosh noise and did not go down the (three) steps (that goes from the laundry room landing to the garage). I am a total noise freak. I am such a scaredy cat. So what do I do? Lock the door. Call Lee.

He tells me I should open the garage door but it's probably just one (of the three) freezers in the garage. I assure him it was not a freezer. It sounded more like a plastic bag whooshing across the floor - even though the doors were closed and clearly no possible way there is that much air movement. So I mentally prepare myself to open the door to the garage (so I can open both garage doors).

Okay maybe it was just a cat. The neighbors cat just had a litter of kittens (do kittens come by the litter?) So I open up my front shades and realize that I am not going to be able to see anything. Armed with my cell phone and the landline phone I tiptoe to the end of the walkway and peer into the garage.

No noise. No movement. No nothing. I'm such a freak it was probably just nothing. But Nani and Nano and I were just talking about snakes last night but there's no way it could be that coincidental  but maybe it was a snake and maybe it's in my van that has both sliding doors wide open and Lee just told me last week:

Continue scanning the garage for anything weird. Hey there is no orange stripe on my bag of soccer balls…

Call Lee. I know he is not coming home but I call anyways. Yeah pointless
Call Nani. I doubt Nano will be home but it's worth a shot. Nope not home
Call boys (plus ABs) mom. Her husband is at work still and the deputy across the street also not home.
Get idea from her to run to another neighbors house. Not home. It 3:15 in the afternoon and NO ONE {who is skilled in the snake killing department} is HOME!!!!!!!!!!!
Run back to garage.
Snakey is still there
Call animal control. Yep I'm desperad-a
Snakey darts out of garage in my direction. Life flashes before my eyes (okay not but it was traumatic). Seriously I was shaking 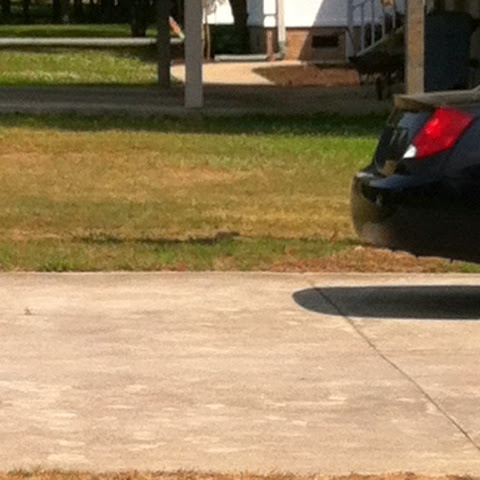 Call pest control. Yeah snakes are not in the same realm of spiders and roaches.
Snake settles under the little work truck. Must keep eye on snake
Call my mother-in-law. Tell her I need one of the guys to come to the house ASAP - meaning like 25 minutes.

He comes over and asks me if I have anything to kill the snake because "he's only killed snakes with guns." Fantastic. Beggars cannot be choosers you know.  Well no guns so he settled for the only hoe in the garage. E's little purple hoe. He requests backup in the form of a normal sized flat shovel. Call Lee. Run to shed. Pray I don't see another snake. Find shovel. Run back to scene.

Oh my goodness my super-loud-white-truck-driving neighbor was so super brave he got the shovel under the van and keep getting closer and closer until he was as close to the head as he could get and JAB!

The snakes whips around and I'm behind him whacking the purple hoe in the air {looking like a total freak} and then the snake does not die. Grrr… 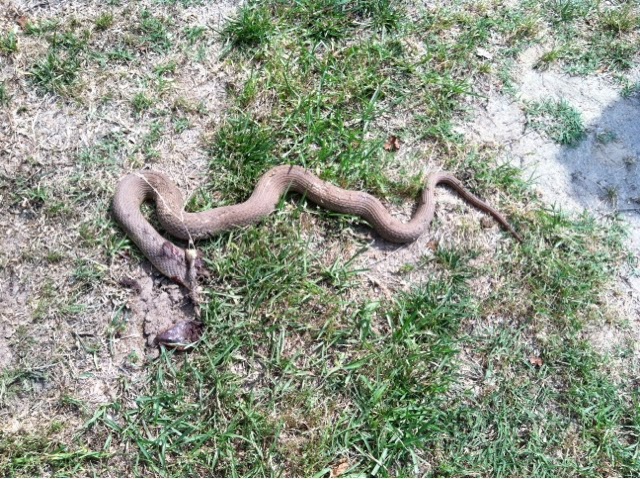 Seriously I could have hugged him. But I didn't because I don't even know his name. But I am going to find out when I have a ribbon wrapped box of thank yous for killing that snake.

A. It turns out this snake is actually a red belly water snake. {Thanks Nani} Not poisonous 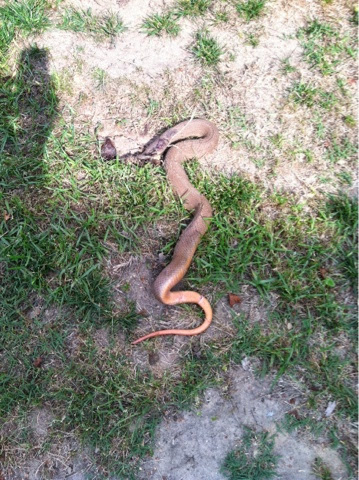 B. I feel totally violated

D. Guardian angel. Yes. I went to go check to see if we still had a seat cushion for our old table and chair set which is in the garage. Why? I have no idea but thank God I did because normally after rest I'll have E and R put their Crocs on and open the garage doors (if they are not already) and send them on their way while I head in to get M organized and outside. R is the first to the soccer balls.

Seriously those girls would have been trembling for weeks had that snake come after them.

E. The snake was likely after this little dude

Hoping you have a snake-free rest of your day week month year life!

crazy day outside with the kiddos