E goes to Catholic School so there are certain things that are super fun about being Catholic that the school she goes to embraces.

Yesterday for example all the pets - real and not as real - got blessed. We'll tip our hats to St. Francis for that. 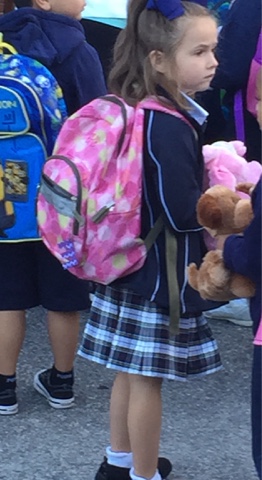 Pink bunny for the blessing 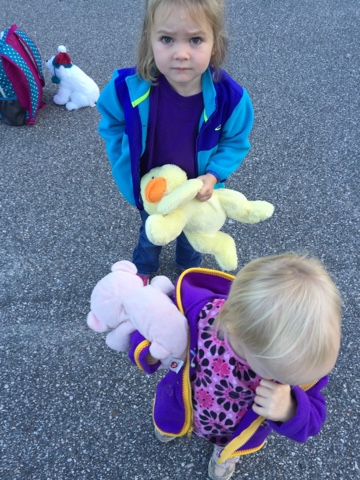 Oh the skepticism over live animals

Well then there's All Saints Day - the day after Halloween. Nothing scary just celebrating good Christian people - martyrs, defenders of the Faith, wonderful role models and examples - that we can and should learn more about so that we can follow in their footsteps living Christ-centered lives.

So the project/assignment is this... Dress up as a saint or biblical figure.

Except E loves to push the envelope a little further and make it interesting - which I wouldn't want it any other way BUT with bebe #4 and general craziness in the last part of the month (more on that once it happens) a break from the crazy would be awesome.

We talked about it and you could be Mary (Jesus' mama) or Queen Esther or St. Elizabeth - John the Baptist's mama or St. Helen (helped find the true Cross) or St. Mary of Egypt (we have her icon in the chapel) - fantastic conversion story - or Mother Teresa or anyone? Thats' a decent options list, no?

No. Of course not. I told her we'd look at costume ideas online (the visual decision maker) - since this is not something I'm throwing together the night before - because that would be stressful and terrible.

Catholic Icing has great ideas but not enough pics for the 5 yr old.

Catholic All Year was perfect because there's a hundred million saint costume ideas all on one page.

So we scroll through once and we talk about them and the saints a little but I don't know them all because, there's about 1000001 saints right?

Well one of them catches her eye. Why? I have no idea. But ever since she saw this costume - which I am no seamstress - I cannot recreate a plaid queen dress and Amazon doesn't have homemade dresses like that. She wants to be....

Saint who of where? 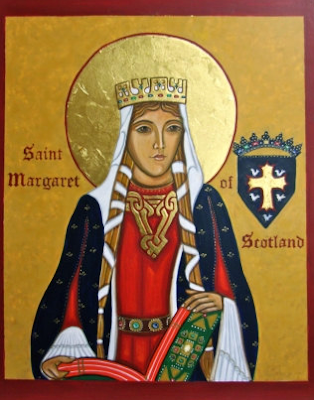 If this icon happens to be brought by St. Nicholas in a few months it wouldn't surprise me : )


Yeah. I definitely had to look her up.

ANYHOW... after I got a little background and knew that trying to persuade her out of it was nearly impossible we are rolling with it. Probably just as random as the Saint Generator. We are embracing St. Margaret of Scotland for this All Saints Day and I'm actually kind of glad I get to learn a thing or two about a saint I've never heard of.

Now if I could only find a medal of St. Margaret of Scotland (that I like and is not INSANELY expensive) so that E can remember this All Saints Day I'd be golden but I'm still working on it.

The costume is NOTHING like the one E saw from the website which is fine with me and her because $20 later on Amazon I think we can rock out turn-of-the-millennia queen pretty well plus I did get one accessory so there will be NO QUESTION where she hails from. Is it over the top? Maybe. But is it great? I think so. What does Papa think? He might need some convincing : ) Shoes might be an issue but I'll probably call - wear your regular school shoes and then put this baby to bed.

Pics to come when it is the day to dress up because I won't want to spoil the surprise!

PS - All Saints Day is November 1st - which is on a Sunday this year so they are celebrating it at school early. Plus November 1st happens to be a certain anniversary of some certain people. Seven years??? Here's to 7x70 more!