Thoughts on the day...

What a day! I wasn't quite sure how everything was going to shake out nor can I explain why I have this overwhelming sense of feeling like I had conquered the day but here goes...

Nothing terribly particular happened this morning other than getting out of the house:

2. With homework completed (that morning which I always promise myself not to let E do but yesterday afternoon was super nice so homework and all its glory {ehem... stress/erasing/encouraging} was put off for the morning... I PROMISE I'm never letting her do it again!)

Went to work. Halfway thought about calling Lee and telling him to head to the hospital - but then I thought better of it.

Let the kids eat lunch outside - thank you GLORIOUS weather.

Then soccer. The one thing that makes me not ready to have the baby. If we can only make it through this first game I kept telling myself this morning... 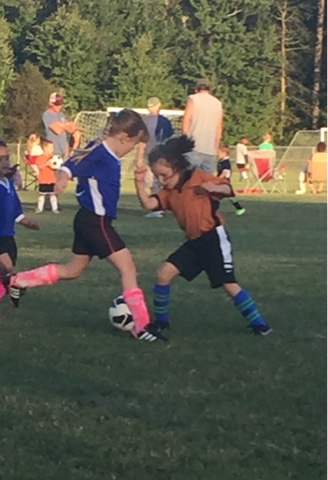 E's been up and down on soccer and R is pretty indifferent about participating. There's a standing E needs to score 2 goals in one season (5-6 games) and R needs to score a goal in order to earn a celebratory ice cream trip. We haven't been to ice cream since Spring 2014 when E scored her first goal and after last season's effort/performance we thought we might NEVER (her word, not mine) get ice cream AGAIN.

Enter this season when the league was broken up boys teams and girls teams. I wasn't a fan until all the girls on the team lit up once the first whistle blew at the game tonight. I was really surprised that girls who last season might not have chased after the ball or kicked the ball in a pack were actually doing it.

Well since you cannot really have too my strategy when playing with 4 and 5 yr olds we got scored on more than several times because of a really fast break. Overall the girls weren't thrilled but still happily giving it their best and smiling and high-fiving and that kind of thing. Except E who was visibly mad about being scored on even though she (and R) were playing way better than we'd ever seen. Then E was running with the ball and somehow kicked her hand and I thought she was done for the day - but she wasn't! She came back and scored a goal! and IMMEDIATELY R breaks into all-out, screaming tears because, well, I'll assume she wanted to score the goal. It was the happiest most hilarious moment of the night.

One sister scores a goal and the other one in tears over it.

Then right before the whistle blew E and another girl were down at the goal and a goal was scored. Who ultimately kicked it in they'd say they both did so it was off to ice cream because well I'm not going to argue over it... 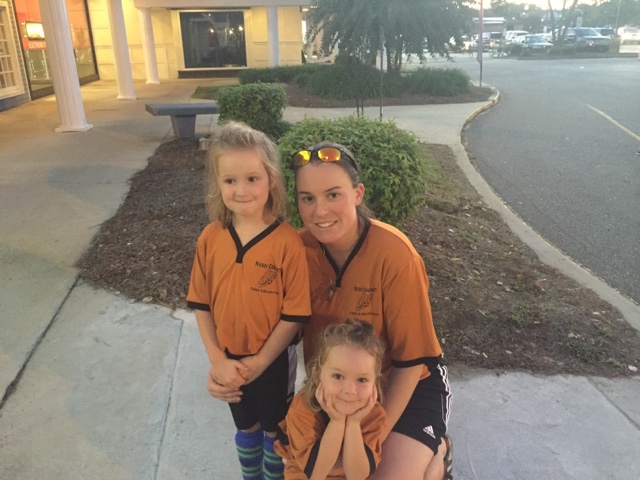 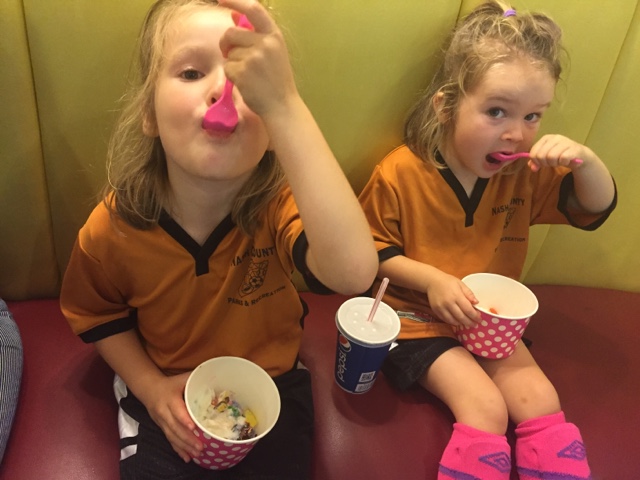 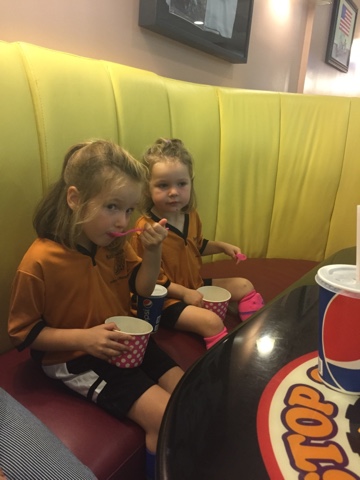 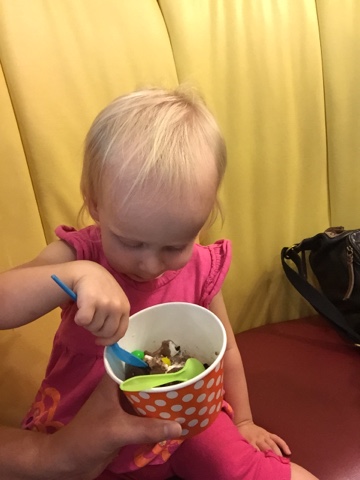 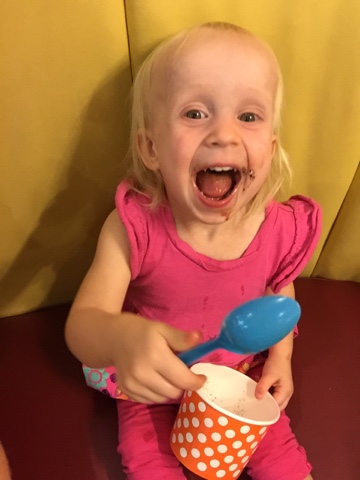 So what's up next? E thinks she needs to score 3 goals to get ice cream again. I think that might require some revisiting. I think E could legit try and help R (and hopefully her teammates) score some goals. While we were driving to the shoppe I was sitting there thinking about how satisfied I was with our team and how E and R did and how glad I was that baby hadn't come yet. We have some younger players who did great and with only one sub I was shocked we kept 4 players on the field for the entire game. It was just an overall great time! 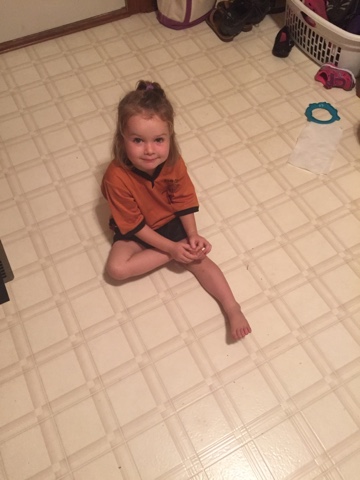 Well we got home (late-ish) and it was to the showers but not without the grass clippings that sprinkled the laundry room floor - hello memories of littering my parents house with soccer grass and how my mom BEGGED us to PLEASE go straight to the laundry room to take off our cleats! 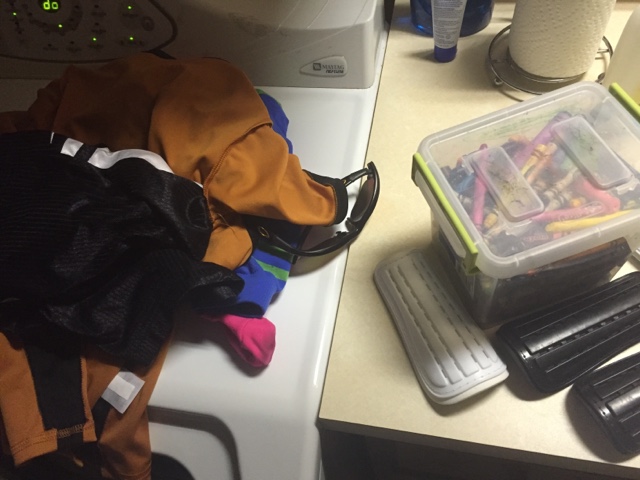 Oh the smell of sweaty soccer gear... It was very present tonight 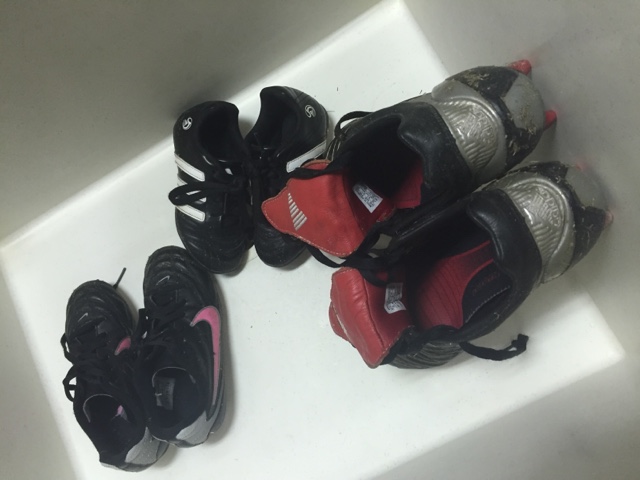 Such a familiar spot for soccer cleats I cannot even begin to tell you. 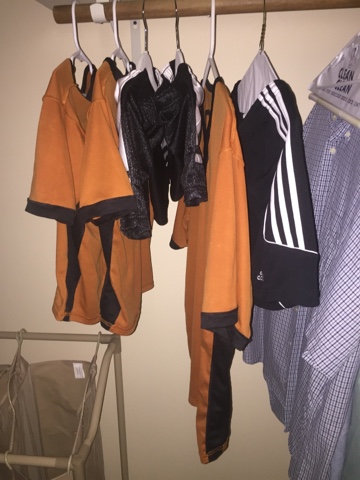 I even ran the uniforms through the wash (and hung them up!) in prep for Saturday's game. Will baby hold out until then? I have no idea but we are ready one way or the other : )
at October 07, 2015