Bridging the gap between last week and this week...

Last week... Papa went to a clergy conference in Chicago. Yes A was 8 days old. Yes we survived with the help of Grammy providing double-team coverage... 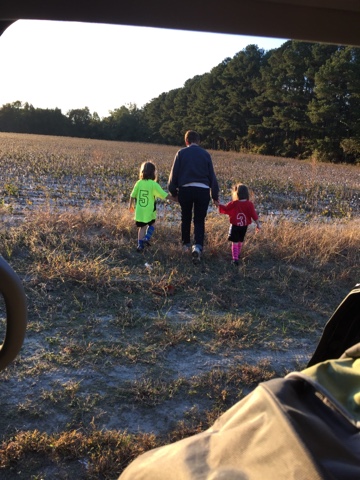 After we survived soccer practice - A was not too unhappy with me for coaching - Grammy and E and R wanted to feel some on-the-stalk cotton. #countrylife

Papa surprised us by coming back a few hours early from his trip on Thursday which was awesome! When he called and said "I have a surprise for you" I replied with "Are you in the driveway?" - because I'm that kind of surprise-r. He wasn't in the driveway but en route.

Then Papa and E turned around and went to South Bend for a wedding - E's godfathers. I think I have discussed ad nauseam how disappointed I am that I could not go. So I'll stop complaining... 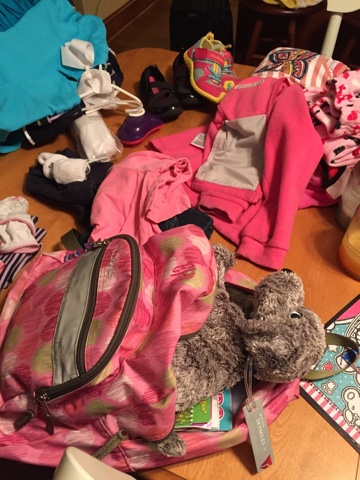 And of course on Friday E shows up with the class pet. So Fidget was in for the longhaul. I was alittle nervous about Fidget getting lost or left (I left a stuffed animal at KFC when I was small - another story, another day) SO I decided to outfit Fidget with his own luggage tag in the off chance he was misplaced. #iamworrier 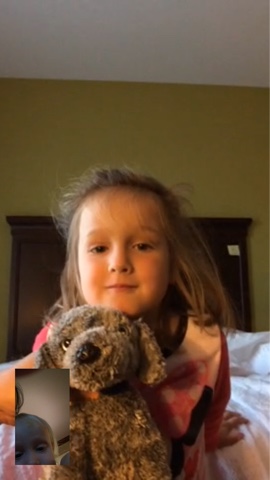 So Fidget and E and Papa had a grande time at the wedding and on the trip. E had a mountain of things to write about in Fidget's journal - which I did NOT write, If she had 100 pictures I am quite sure she would have written a hundred sentences - fortunately Papa only printed 4. I think I might get her a notebook to 'journal' in because she really enjoyed writing and then reading the sentences she wrote. 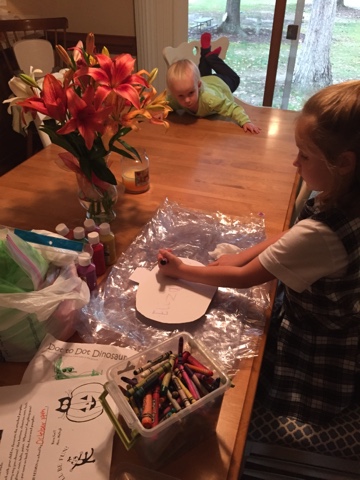 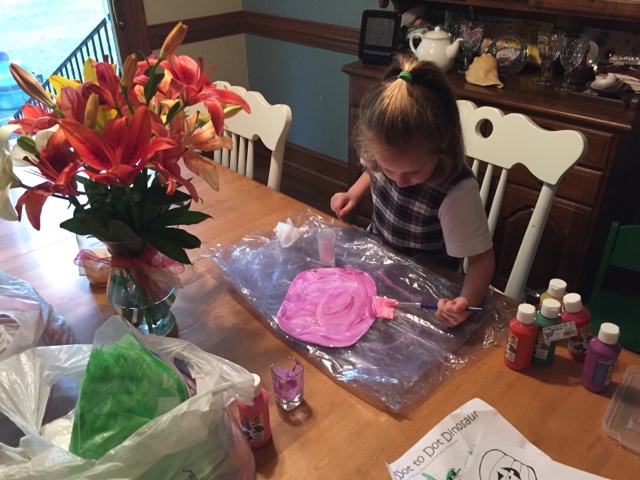 Pink and purple pumpkin anyone? 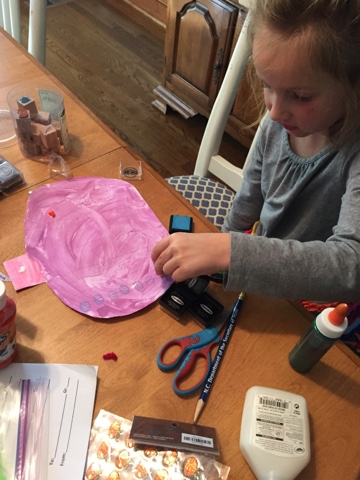 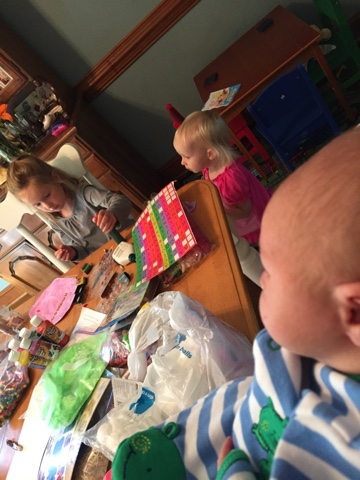 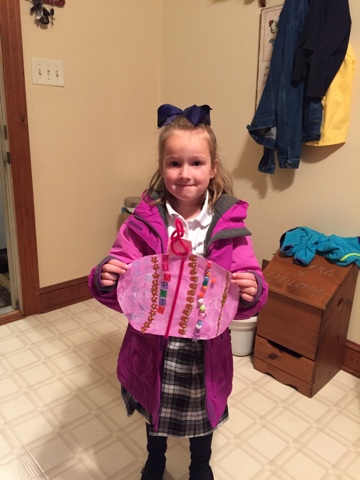 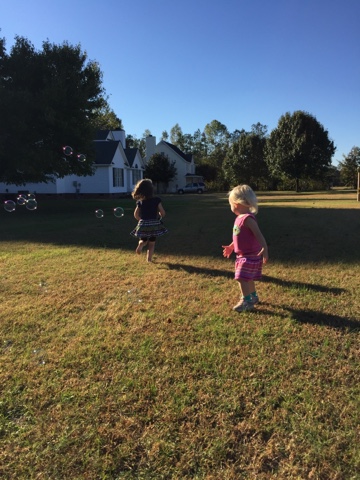 I was asked by a wise uncle what to get M for her birthday - because really she doesn't need anything... and my answer was chalk and bubbles. 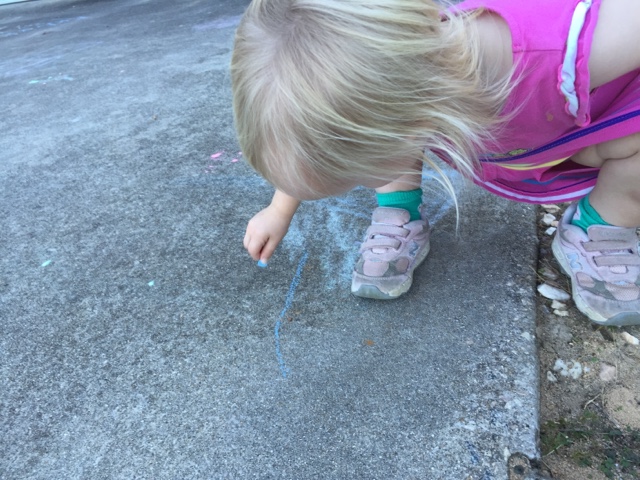 That's what happens when they leave the chalk in the rain and out in the driveway... 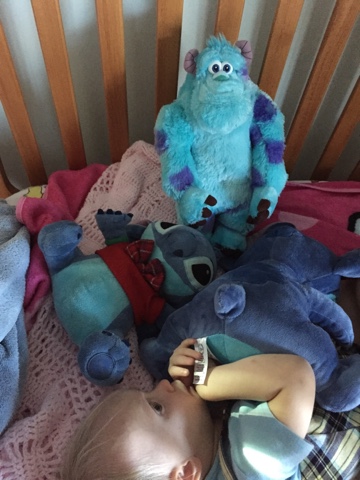 Awhile back M took to this Christmas Stitch that Jibbe got R for Christmas a few years ago. Why? We don't know. But she loved it. Alot. She carried him around. Called him 'Stit-h'. The part she loved most about Stitch was his tags. She'd sit there forever and suck her thumb and twiddle with his tags. Well after a few months the tags got curled up and not terribly clean looking.

One day Stitch was left at Jibbe's. Jibbe -being the well-meaning grandma cleaned Stitch up a bit. Well she cut off Stitch's tags. M got Stitch back and started totally ignoring him. She wouldn't carry him around. Didn't want him during rest or anything. If you asked her what happened to Stitch she'd say 'Jibbe broke it'.

So Jibbe of course tried to replace Stitch with someone similar - Sully from Monsters Inc. He was blue, had a little tail, and two tags. Totally fit the bill.

THEN Jibbe came back with the real Stitch. Except the new Stitch did not have a sweater and was a bit bigger. M was super confused and not happy when she saw them side by side. We thought she was going to pass Stitch onto A. 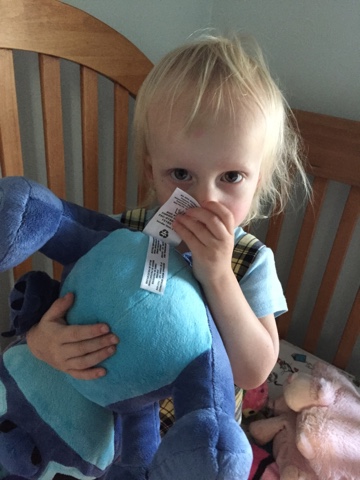 Let's just say... She's warmed up to the new Stitch quite well

I'm finally getting around to writing thank you notes to all the people who have helped us/given us things since A was born. 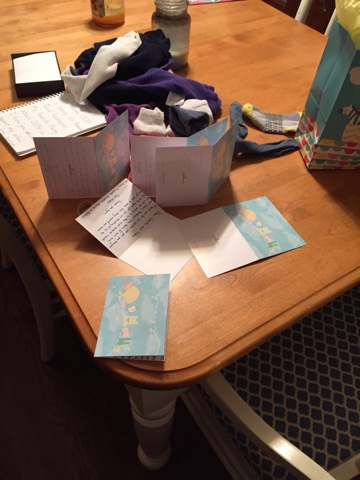 The list is growing so we feel quite blessed to have such great family and friends! A and I are back to a semi-normal work schedule... 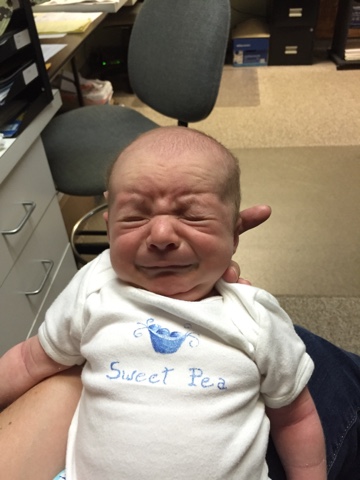 He's generally pretty happy about it but makes this face when I tell him I forgot his bouncy seat.
at October 30, 2015

Email ThisBlogThis!Share to TwitterShare to FacebookShare to Pinterest
Labels: babies, crafty, grandma, outside with the kiddos, papa, pumpkin, soccer, traveling with kids, wisdom of a toddler, work