Wisdom from an Old Priest 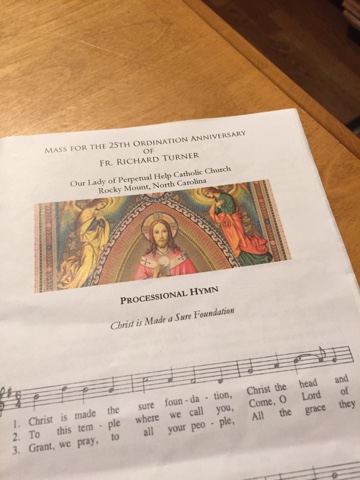 We recently went to the Ordination Anniversary Mass for a priest here in town. He's got a great story. First he was ordained an Episcopal priest (was married, had kids etc). Then stuff happened in that church and he (and his wife) decided they could no longer be Episcopal so they jointed the Catholic church - after 25 years of being a priest. He was received into the Catholic church but his priesthood did not transfer - if you will. So he petitioned the local bishop for ordination - who then sought permission from the Pope. It is kind of not normal to be an ex-Episcopal priest asking to be ordained so best to clear it with Rome, right?

Yeah. Rules are rules and I happen to play by them.

So TEN YEARS later the bishop got the go ahead for ordination.

Fast forward 25 years and here we are, sitting in the same church he was ordained in. Just to do the math, if he had stayed Episcopal he would be celebrating 60 years of ordination to the priesthood. So yeah, he's in his 80s and still serving Mass quite often and presently he is in Montana doing what he loves best - serving the mission parishes in the middle of nowhere. Kid you not.

Okay so what's the point. Fr. Turner has been around. He's seen a lot. He's heard a lot (of confessions). He probably knows what he is talking about. Anyways, during his homily at his anniversary Mass he was going on about stuff (per my usual perception of all things homily) so I tried to focus on one 'take home truth' as the one of the deacons (not mine) at our church likes to say. One line. One sentence. One thing that really sticks with you. Here was my take home truth from Fr. Turner's 25th Anniversary Mass:

Spot on, no? Well you can let me know what you think... or not. But it stuck with me. 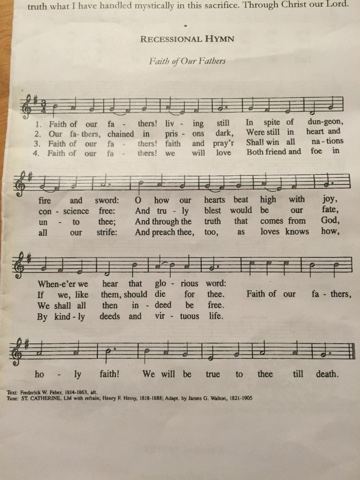 This was the recessional. I'd never sung it before but I really like it. 'Faith of our fathers, holy faith! We will be true to thee till death.'
at June 14, 2016