This year has flown by! I mean you were just born right? Like JUST BORN - and your Papa probably still has some PTSD from that day. Except you weren't just born because there were a million things that happened - and a million more things that you tagged along for - like that swim meet when you were a mere 5 days old (if you ever go to the Olympics for swimming you know why) and R's first day of K and coaching M's soccer team and so much fun and crazy stuff.

You big brother adores you and your name Clare-Clare is the first two syllable word he uttered so that has stuck for you and Clare-y girl and Clare-y nut and just C but not CC which surprises me because of all the kids to have a nickname CC would have been an easy shot.

You are a great baby. Good sleeper. Good eater. We had the longest BFing stint of any of the kids and after all that hassle of pumping in China you quit after only a week or two after I got back (about 10 months in)! Your teeth did not appear until 10-10.5 months and they came in a strange order. Two on the bottom. Two fang teeth and two top teeth.

Your likes include going to school, sitting in the pool, pulling nightlights and cords out of the wall, eating, drinking milk and only milk, yogurt, baths, clapping your hands, waving at yourself in the mirror in the morning and watching all your sibs go to and fro.

Your dislikes include water to drink, waiting to be fed, getting mauled by your big brother, and getting put in your carseat. You don't love rice cakes but you tolerate them

You make lots of different noises and sounds. No words to speak of. Sometimes I think I've heard you say Clare-Clare but I highly doubt that's possible.

We are so happy God gave you to us and while things may be wild and crazy more times than not, I hope you love it because we are keeping you! 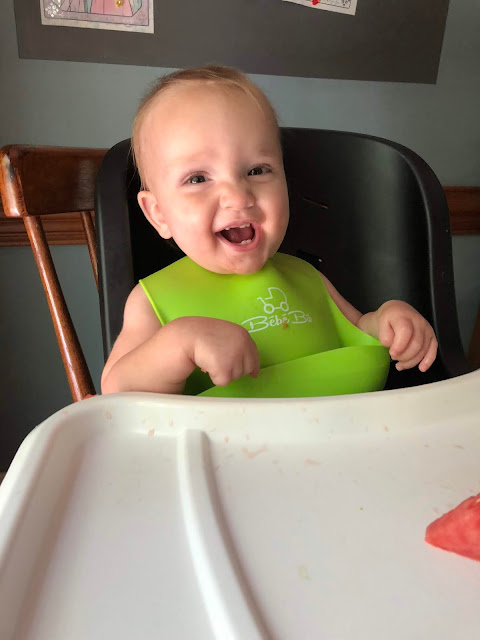