Real Life - Let's Give this a Whirl


Let's give this Real Life thing a whirl because I enjoyed reading Kate's post and its Thursday and I have a two yr old with my mother in law and a baby who is supposedly down for a nap but is currently talking to her monkey and baby. Here's to taking off the mask! 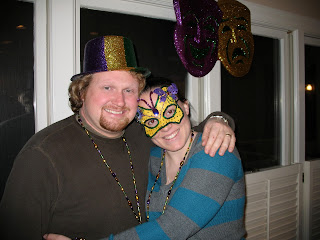 1. I don't do the cooking around here. Lee is the chef. I will fill in the gaps over the summer and might even pull out a recipe book - my mom has given me at least two and everything sounds easy in theory - but really cooking with a toddler and infant is not the easiest thing in the world. I think I am going to have to step up my game come next summer because our head chef will be back to late evening arrival again.

2. While we are on the topic of food - I love black beans. I mean seriously could eat them once or twice a week and would not have a problem with it. I think I left part of my tummy in Guatemala. I am joyfully passing on this taste for black beans to my girls - much to Lee's dismay - last night E had two black bean burritos and R had three helpings of black beans! I should mention Lee abhors black beans and will not go near them!

3. I really have gotten used to / LOVE our minivan. Gasp! Seriously if you have kids you need one of those things.

4. I think I would go crazy or broke if I had not discovered MMO. Being able to work part time and stay at home part time really enables me to be a mom and have goals and responsibilities outside of the kids. Ever so grateful for my understanding/flexible employerS.

5. My only qualm with being married to a deacon is that it means one less set of hands on Sundays - and it seems that my kids are at their worst during church. Lee has told me it only seems like they are worse because I want them at their best. That does not make the situation any better though. Thank goodness for the ladies who let me pass off E or R so I can tend to the other!

6. I cannot stand stop lights. I cannot explain why. I mean of course I like them in principle and the traffic efficiency that they create - but there is nothing like waiting at a stop light! Though one of the benefits of the Mount versus Raleigh-world is that the Mount has way less stop lights!

7. If you had asked me when I started college what I would be doing with my life I probably would have told you I wanted to be a nun and live in another country - living the charism of nuns like Mother Teresa. Husband and kids were not even on my radar screen...

8. I am not crafty. The most craft thing I do are the cross stitch stockings. I never lifted a needle (other than to sew a hole or button) until I started E's stocking - much to everyone's disbelief. Now cross stitching has taken the place time of reading.

9. When I am alone in the car I like to roll down the windows and turn the radio up and blast the music and sing along - and yes I have done this on several occasions in the van. I even will go past the house and down the road just to finish the song - if its a good one

10. I rarely wear makeup - even to work. Its not even like I think its a ton of work - I can never get my eye make up right and I happen to find that insanely frustrating

11. My first road race was a marathon. I have not done one since and the only reason I would want to run one again would be to qualify for Boston. I have run a few half marathons for which the training is so much more manageable.

12. To round off the top twelve, I like to sing when I run. Its crazy. I am sure my neighbors think I am crazy. I know it is horrible for my breathing but sometimes I just don't care : )