7QTs - Canine Encounters, Dirt and Worms, and Lots of Water

Trying to catch up on two weeks worth of activities...

Two weeks ago I was taking my normal walk around the neighborhood when I noticed a neighbors dog which is usually in a fence was... well, not. The boys were loading a lawnmower and the dog was watching me. I kinda knew he what he was thinking but it all happened so stinking fast that I froze, screamed and this happened: 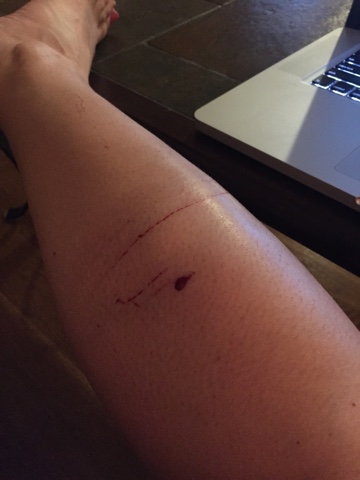 Then he just stopped and looked a me - not an attack more like an encounter. Really not too much worse for the wear and the bruise from my muscles being frozen in time was worse than the bleeding.

Well that did not end the drama - of course otherwise this story would be as pointless as this, 2 days later at the kids swim meet a neighbor asked if the dog was up to date on his vaccines. I said I didn't even think to ask but I was pretty sure he got me with his claw not his tooth - pretty sure. But I was not going to say 100%.

The next day at the office a co-worker asked me the same question. Then I kinda started to get nervous. Why was EVERYONE asking me this and maybe I should have asked and what should I do because I'm just a tiny bit pregnant. So I called the doctors office and they said to go to urgent care or the ER as well as  find out the answer to this question.

One urgent care won't treat preggos. The other urgent care I don't like and they told me they'd get have to call animal control about the incident and get info on the vaccines. So call back to the OBs office - which is closing in 15 minutes because its Friday.

My doctor says I need to find out the vaccine situation and 'stop walking!!!!!!!' - right.

Collect girls from school. Go to bank (paydays are so rewarding : ). Go to neighbors house - whom I've met in the street for the 1st time 3 days ago. Ask the infamous questions and BAM...

The dog is NOT up to date on its vaccines.

So several calls to Animal Control later - the dog is doing in-home quarantine and observation - which the neighbor is totally great with and now I wait and see if I have to get a rabies shot. Uncle Kev had a run in with a stray dog a few months back so he knows and now I know more than I ever cared to know about rabies and the vaccine and the length of time you have to get the vaccine if the animal is infected.

Speaking of swim meets... We had two since the first one. One home and one away. The girls were way confused about the away meet and R didn't want to wear her swim cap but she and E 'raced' in the same heat and R was (as usual) carried the length of the pool but E actually did a bit of her own swimming so R finished before E - and that was SUPER controversial. SUPER. 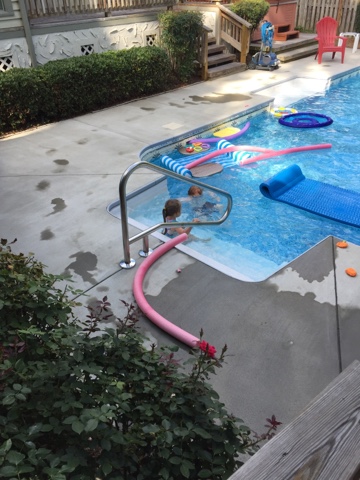 This week we missed Monday practice because of church so we were set for Tuesday. 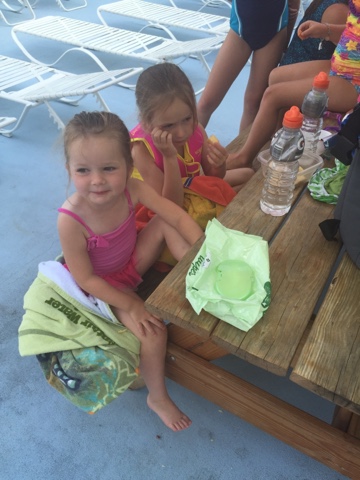 Dinner at the pool = no mess in my kitchen 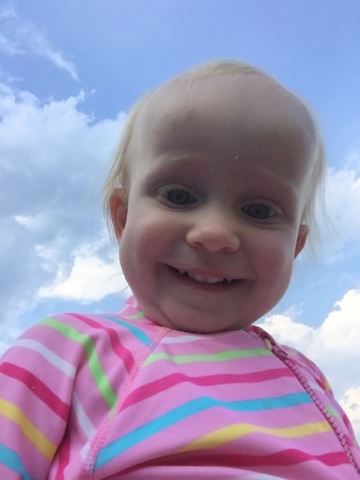 Except practice got thundered out 10 minutes before it was supposed to start. 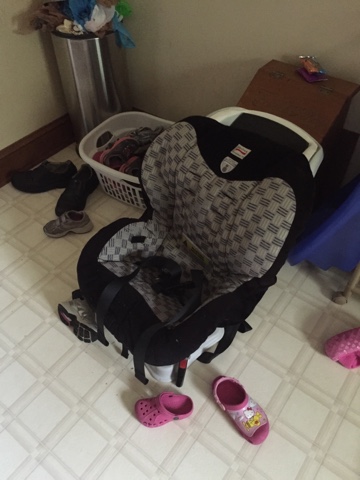 Please note, the swim diapers are FULLY pee permeable. So rushing to throw your bebe in the van before the storm will result in a pee-filled carseat which will require washing and wondering if it is possible to remove the smell from the foam padding under the cover. Mysteries abound! 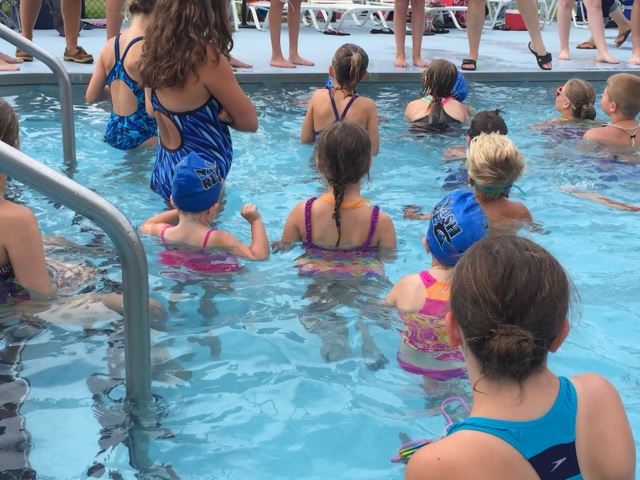 This was at yesterday's meet and the girls are not 100% sure about the pre-meet cheers. 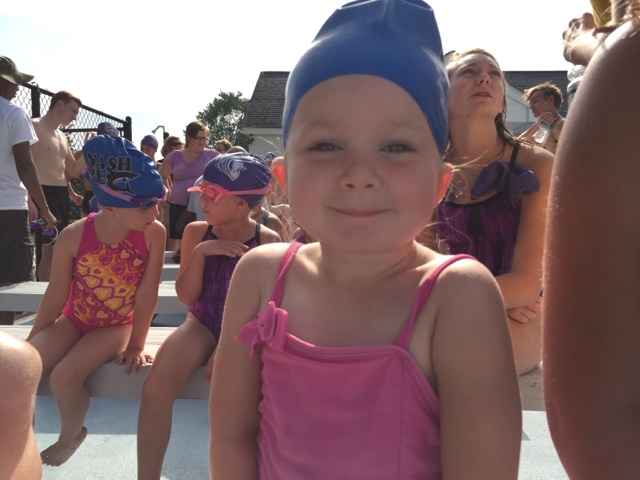 I love R's expression and that E is carrying on a conversation with the swimmer next to her. 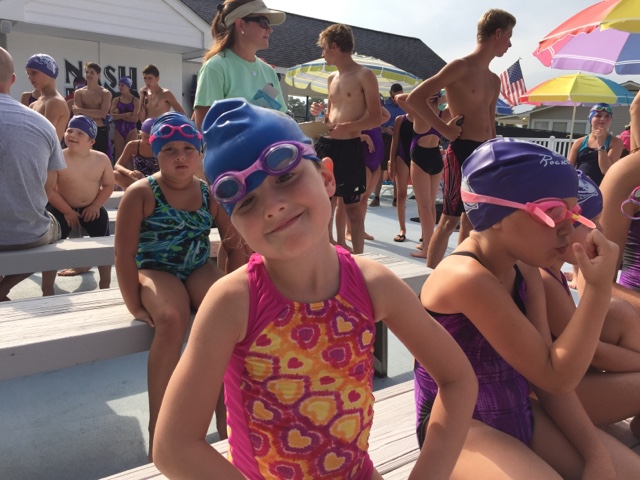 In other watering news... 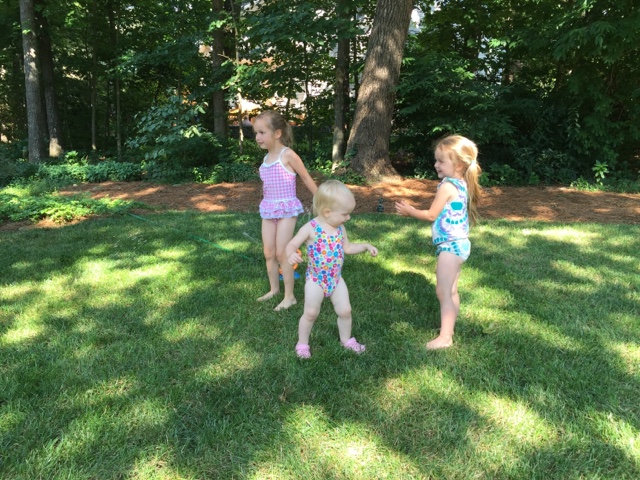 The girls got to go through the sprinkler at Grammy and Grandpa Joe's the last time we were there... 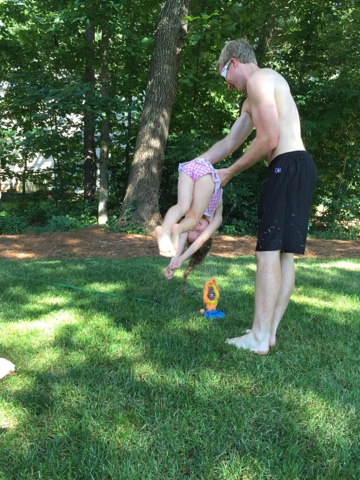 E thought it was great and loved being chased by Uncle Kev and the hose. R not so much.... 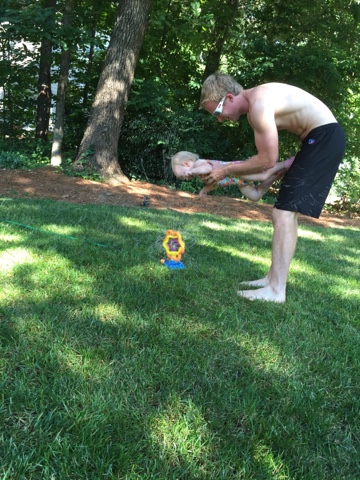 M was just taking it all in...

For the Nativity of St. John the Baptist I stepped up my game from last year and actually made dirt and worms for dessert (locusts and honey and dirt and worms are totally interchangeable, right???) 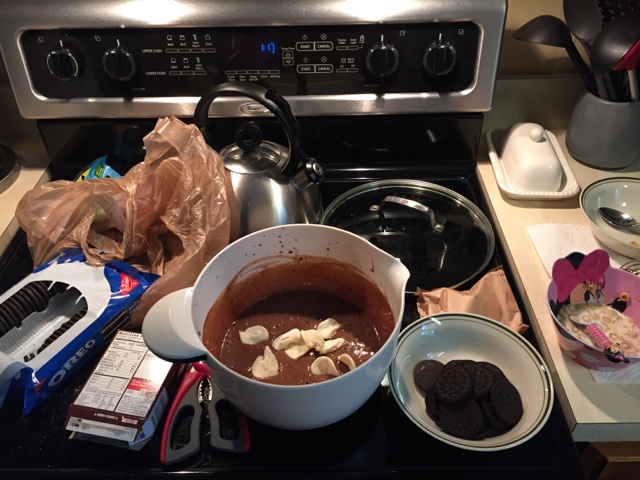 Two sleeves of Oreos, a pack of instant chocolate pudding, Cool Whip and a pack of Gummy Worms later and bam.... 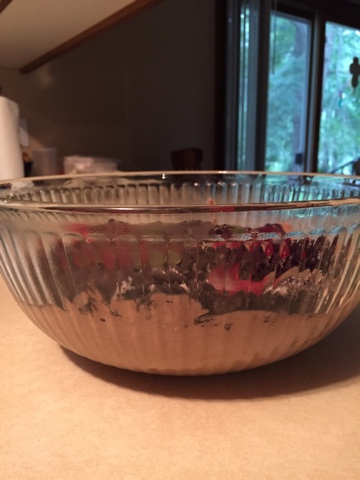 Exact same food that John the Baptist ate - no doubts 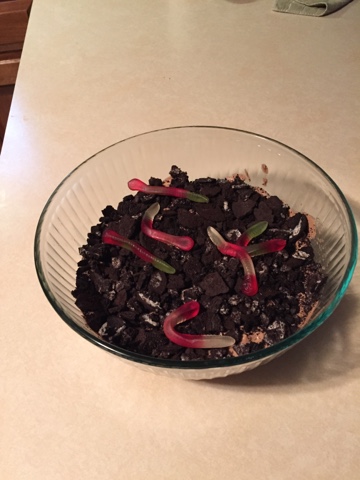 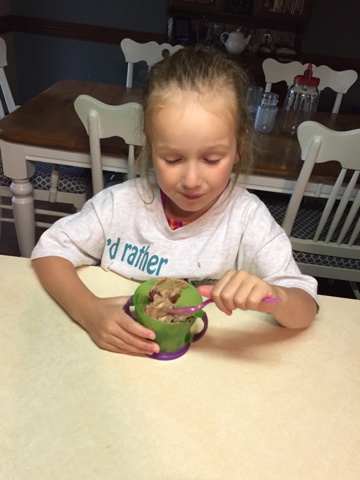 Unfortunately I couldn't take the dirt and worms to Liturgy because the refrigerator is not working so we feasted on dirt and worms the day after. R didn't finish her dinner so she didn't get any - and trying to leverage dessert in order to finish dinner with her is 100% pointless.

We've been fattening up the squirrel population... 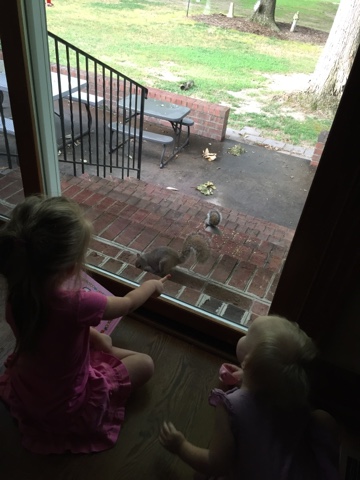 And I think I have seen at least one hawk in our backyard this summer.


I tried out my banana-PB-chocolate smoothie on the troops.. 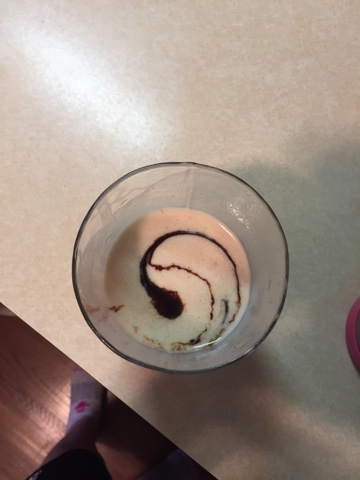 Mostly well received. R was the least biggest fan - of course. I need to try a few more out but I think my hope for smoothies + muffins/granola is going to be only a dream because I don't see it playing out too well with R in the mornings. SHE IS SUCH A SLOW EATER!!!!!!!!!!

M has taken to accessorizing like E and R. 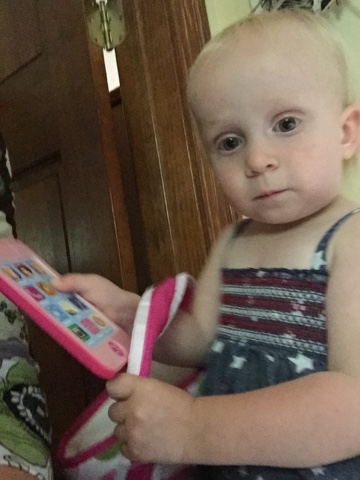 She's so funny and she is looking more and more less like a baby. E and R have been asking when M is going to move into their room - probably August. And after the carseat fiasco - see #2 - I installed her carseat forward facing so she thinks she's hot stuff at the present moment!

Email ThisBlogThis!Share to TwitterShare to FacebookShare to Pinterest
Labels: crazy day, outside with the kiddos, quick takes, summer, swim time