Pascha 2017 and other thoughts on Holy Week

Well we made it to Easter/Pascha... as did everyone else. So... Christ is Risen! We made it through Holy Week and all the services that go along with it without too much ado.

Palm Sunday involved lots of distractions at church with palm and pussywillow branches. We took Monday and Tuesday off from PSL. Wednesday we did go to Presanctified Liturgy and everyone received the Anointing of the Sick (in eastern Catholic churches it is completely normal to receive this sacramental anointing once a year whereas in the western (Latin) Catholic church a person has to be in substantially bad physical health - I digress).

Holy Thursday we stuck around Rocky Mount for evening Mass and procession (Lee likes to keep his feet in both east and west church doors as much as humanly possible - which is totally fine and it saves us from driving 2 hours that day). E has her hopes set on hanging out in the choir loft but she settled for the third row pew. R, M and A and me hung out in the Narthex for the greater part of church. I told R she needed to step up her church game and she said she's 'really good at Stations' so I told her she needed to be really good at Mass too - that worked wonders. Highlight of the evening was M talking to one of the older Knights of Columbus (who was very understanding) and announcing to him that he was fat. Need I say more? NOPE.

On to Good Friday.

The girls and I went to Stations at noon (very grateful for the day off from work). We still managed to be a hair late but at least Papa and the boy stayed home so it was the most prayerful, prayer-filled Stations of the year. I'm halfway convinced R and M could learn to behave better if I didn't have tend to A's antics. We finished up our last decade of the rosary on the way back (we do a decade a day during the week) despite E freaking out that she 'couldn't' because she had broken her rosary the day before - everyone got a new rosary in their Easter basket so solved that problem.

In other Easter basket random news, E informed me she hoped she would get a veil in her basket this year - which would have been helpful to know about 6 weeks before. The girls had been (trying) to wear veils during PSL this year for whatever reason and I got a new veil from here that I knew was A-proof and future baby proof.

Anyhow, Lee went to Good Friday service in here and then we all miraculously made it to our Entombment Vespers in Raleigh on time. There was surprisingly very little grumbling about making the hour long drive for the second time in 3 nights and everyone did surprisingly well.

Saturday was filled with lots of cooking on Lee's part - Pascha bread, Pascha cheese, Russian salad, City Chicken and pork. E insisted that she wanted to go to the Easter vi-du-al- that's vigil kid, with Papa. The Easter Vigil is when all the people who are coming into the Church get baptized and receive confirmation and Holy Communion - and its really, really really long. Like to the tune of 3 hours long and it's really, really, really late. As in it starts at sundown so the Paschal fire can be lit and seen. So despite the 5 am departure the next morning, Lee nor I could come up with a reasonable reason to bar her from going to church with him so off they went. 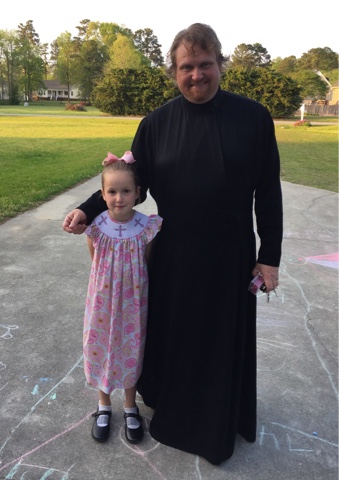 Because when your 6 yr old says she wants to go to a 3 hr church service, you cannot refuse?

Upon their 7 pm departure the others were tossed in bed and I had some things to knock off my list. 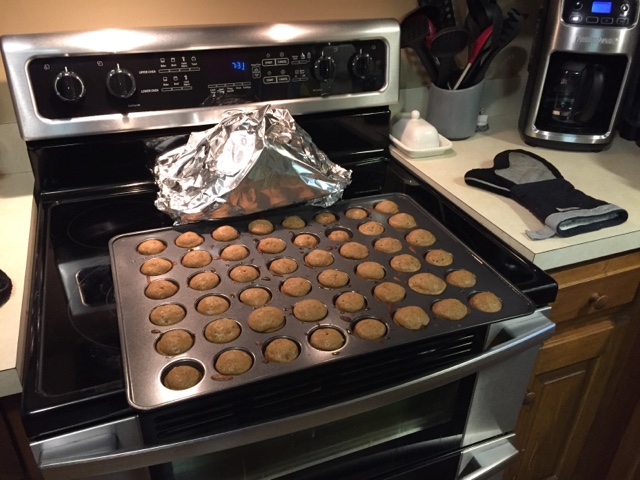 $5 for 12 muffins at Harris Teeter or nearly free pumpkin muffins from home? Breakfast was served. 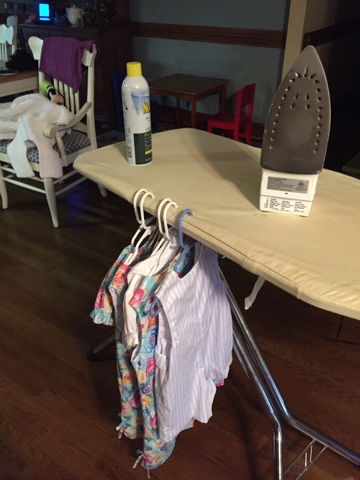 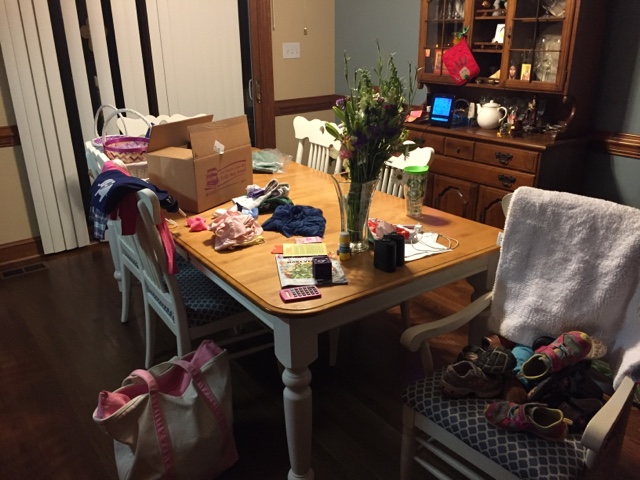 I was fading so very fast that night. The laundry was done and extra clothes had been ironed and I barely had the energy to dig the Easter baskets out of the upstairs closet. I had their rosaries, bathing suits, books and cereal for the baskets because we are super lame and don't put candy in their baskets. I knew everything we needed was on the table just not organized (included those flowers which were supposed to come to Raleigh with us but didn't make it : ( 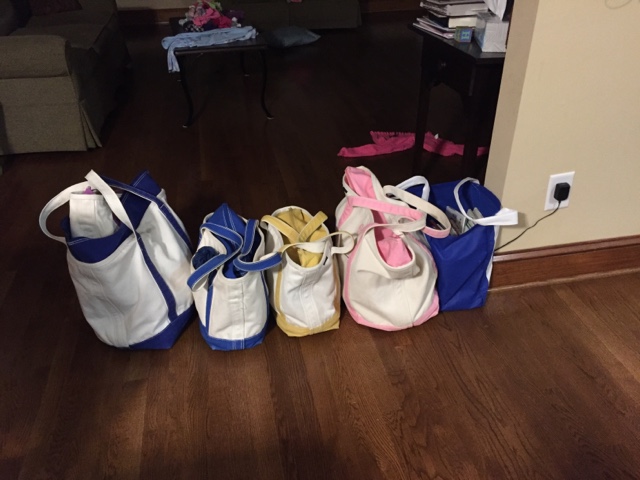 That's what everything on the table amounted to when it was packed up in the 4 o'clock hour on Sunday morning. Lee and E had rolled in the door at 11:50 so the 4 am wake up call was more trying for him.

We loaded up the Transitasaurs and were on our way. I noticed A was warm when I tossed him in the carseat and from the time we got out of the van at 6:29 dressed and ready to go to 9:20 he did not leave my arms. Which in hindsight was way better than wrangling him for 2.5 hours but he was kind of pitiful and exhausted and wouldn't let me sit down until about 2 hours into church. He did cut me a break when all the food was served and peacefully ate some bread in his stroller 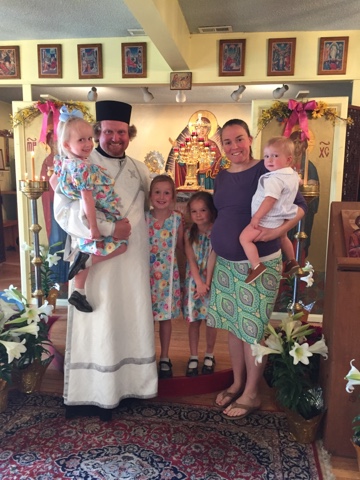 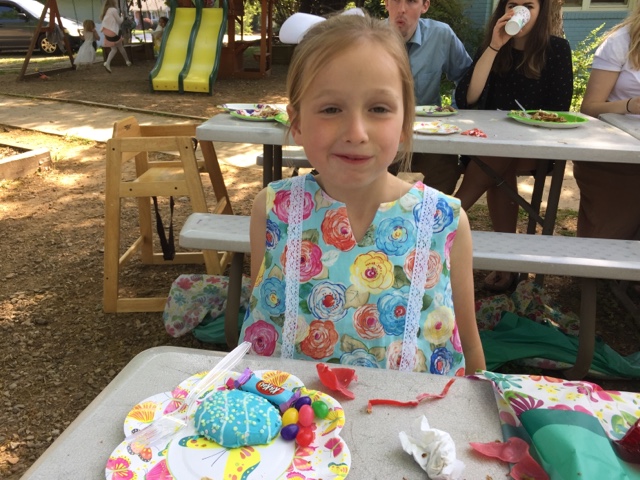 Lots of meat and sweets were consumed 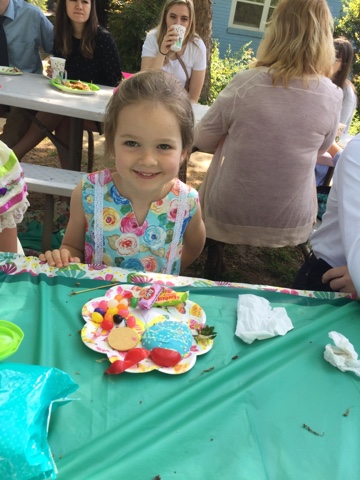 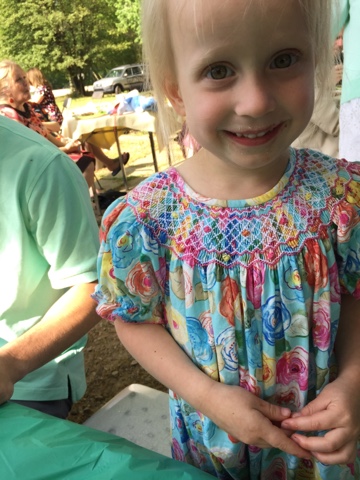 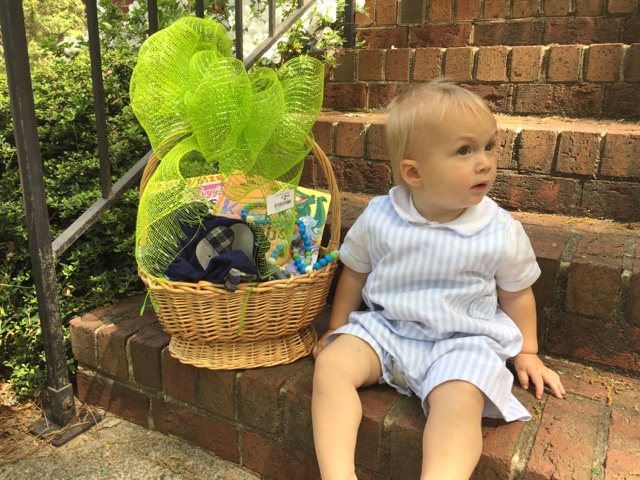 A perked up for a few minutes after some Tylenol 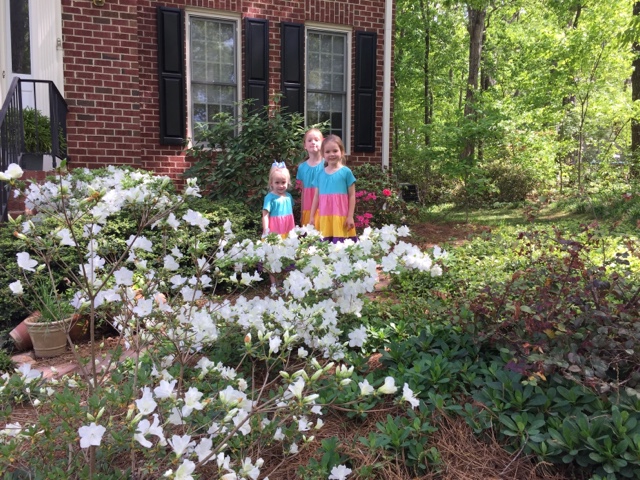 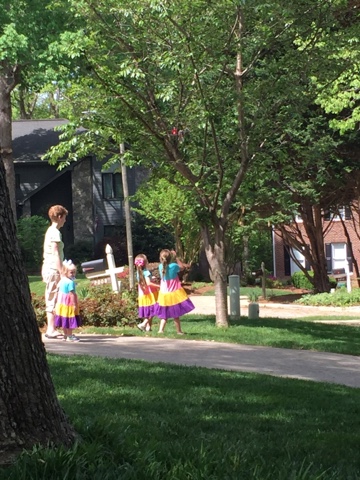 Uncle Kev hid one up in a tree and will probably remember that next year he needs to hid E's in a tough spot. 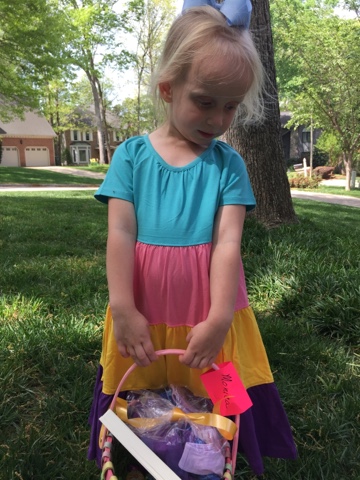 The basket from the tree 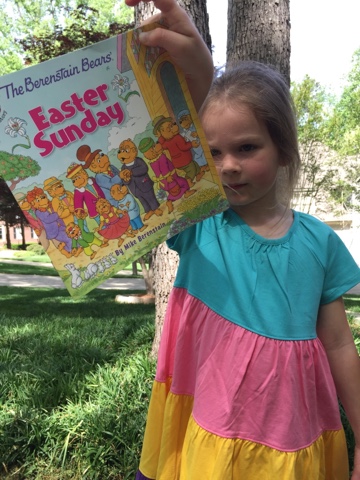 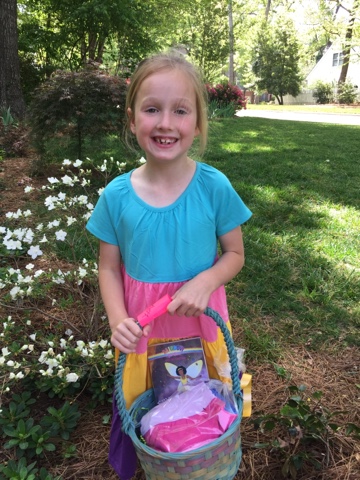 She found hers in the first spot she looked!

Then it was rest time followed by an A+ dinner at Grammy and Grandpa Joes plus a plethora of desserts that no one had room for.

Wishing everyone a Blessed and Happy Pascha/Easter
at April 18, 2017