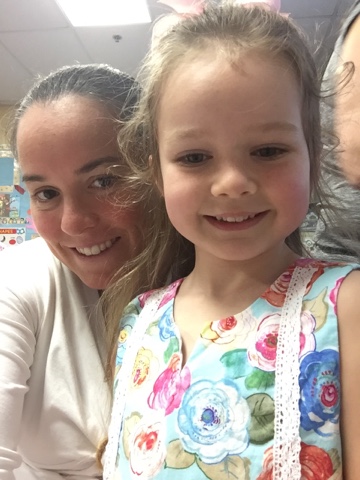 So we got dressed up and had a great time She got my age spot on 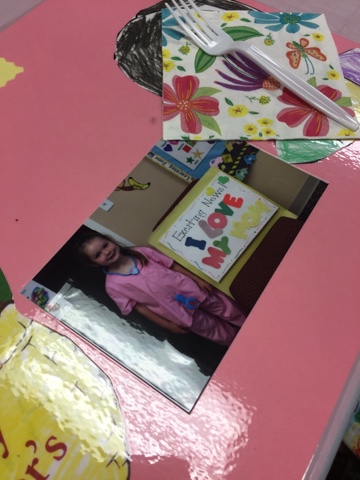 And she said her favorite thing to do with me was play Candyland and I'm quite sure I've never played that with her so maybe she's dropping some hints... 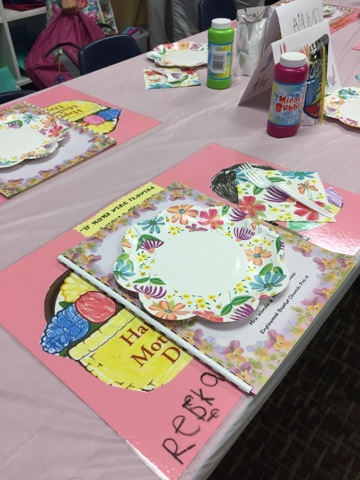 We had lots of moms here on Sunday which was awesome but included zero pictures : ( Basically my mom and mother in law are fantastic and I want to be like them when I grow up. Lee cooked up an insane amount of tasty food despite his ridiculous work schedule.

I'm trying to adopt a new complain-less attitude about pool season - especially this one - but it is really hard when the kids are asking where Papa is and when's Papa going to be home because they literally see him for all of 2.5 seconds on a good day. R has called him in tears several times just to tell him she misses him.

I feel like this pool season everyone is being stretched like a rubber band and we are just hoping and praying that the tension releases soon... It is one for the record books that's all I can say 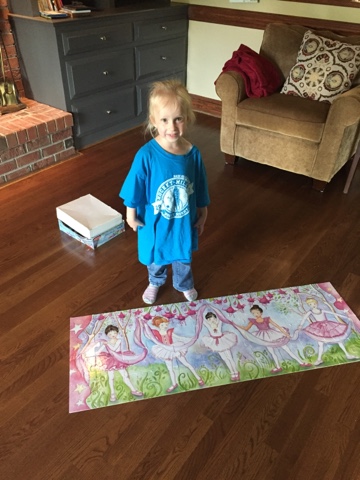 Once she was done she requested the classical music be put on and she danced around with the ballerinas.

---4---
A had a nasty fever on Mother's Day plus a cough and drainage from all facial orifices soooooo.... 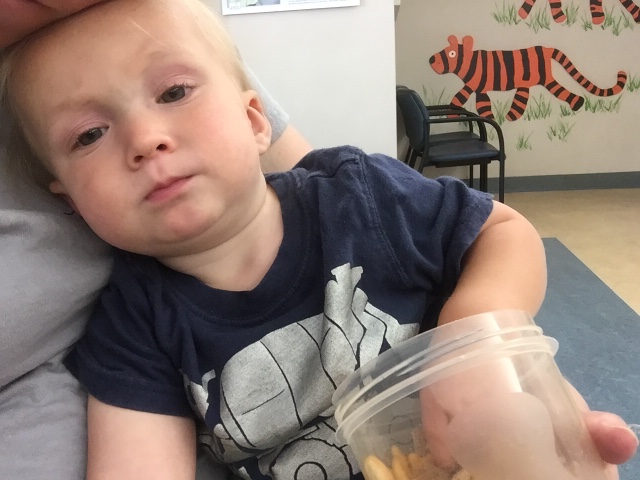 As if I needed an excuse to take another day off from work (we swung but the office and got some stuff done and A got to play with a keyboard), we went to the pediatrician. And as if I needed one more thing added to the mountain of STUFF going on in the house over the next several months - wrapping up soccer and tee ball teams, pool season, end of year school stuff, swim team, new baby, beach trip, work, school starting, POOL SEASON - get ready for it, ready.... A might need tubes in his ears. Fourth ear infection in a few months will do that so we go back to the doctor in 2.5 weeks and I'm praying that we don't get an ENT referral.

Honestly, when I heard that I felt like Vinny - from My Cousin Vinny when he's outside of the cabin and he's rattling off everything that is going on and says IS THERE ANYTHING ELSE WE CAN PILE ON TO THE OUTCOME OF THIS CASE?

I think I felt like this 2 summers ago when I was pregnant with A so I am trusting that all the trials and stress and mess will teach me/us something and help me/us learn something and become stronger because seriously, seriously - God must know we are way stronger than I/we think we are because its crazy. I really cannot think past a few days out - and maybe that's the point:

The future is not in our hands. We have no power over it. We can act only today. We have a sentence in our Constitution that says: ‘We will allow the good God to make plans for the future – for yesterday has gone, tomorrow has not yet come and we have only today to make Him known, loved and served.’ So we do not worry about the future. - St. Teresa of Calcutta 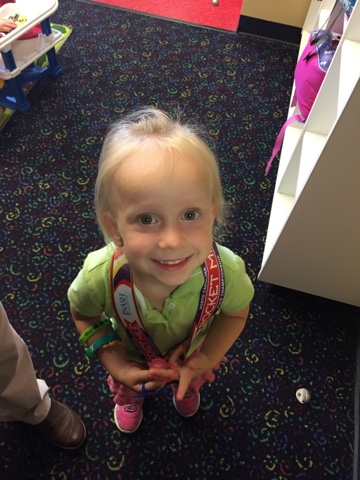 M is so mischievous. And I don't even know if that's the right word because she knows exactly what she's doing. I went back to drop something off at her class and that's want I find. She decked out in her run medal and rings and bracelet and come to find out this is somewhat normal for her... and I didn't even know it! She's been stashing her bling in her front 2 pockets of her book bag which I NEVER check. I pretty much let her keep them for the rest of the week rather than rock that boat because it wasn't worth my time for fight and tears...

Also on the same day she tossed a chicken nugget from lunch in the trash can and TRIED to pass it off that she had eaten it... NOPE. That didn't happen. She's training me early for devious doings.

These kids have been troopers this week... The schedule has been totally whacked out and we haven't been able to go to everything AHG and soccer games because there have been tee ball practice and end of year programs but we've made it through. I think I have said sorry to them more in the last few days than I have in a while - and if you think you are too big to say sorry to your kids you ought to try it - it will humble you to a whole new level and really make you think about screaming to get in the car - or at least that's been my problem. 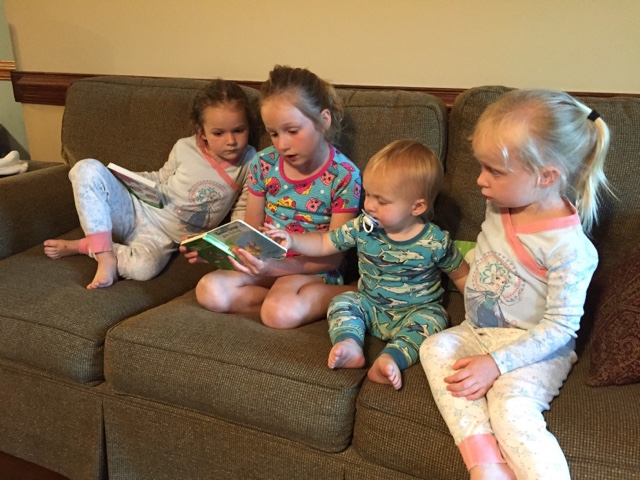 They really do love each other. It is awesome having a reader in the house because we used to read to E and R nightly but now it is much more sparse. I asked E to read everyone a book while I cleaned up the kitchen and this is what you get. 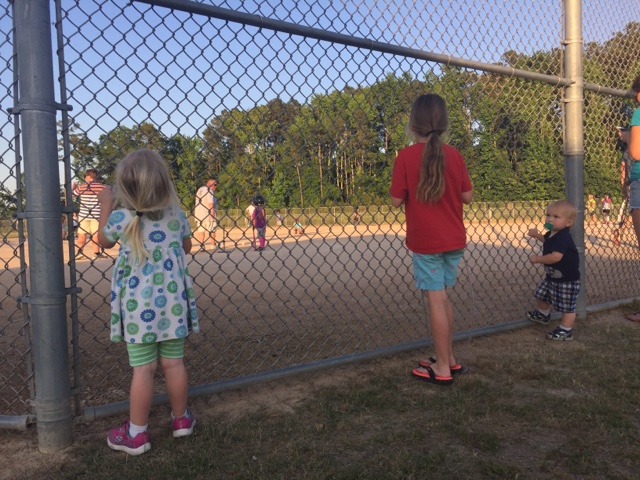 We've traipsed around town this week knocking out some required engagements and attitudes have been pretty good. Toss a bit of a cold in there for everyone and it always gets a bit dicey. But praise the LORD it is Friday and He saw us through. Now if we can just get through next week I think the majority of all sports activities will have wrapped up and that will be 3 million less things on our plate. 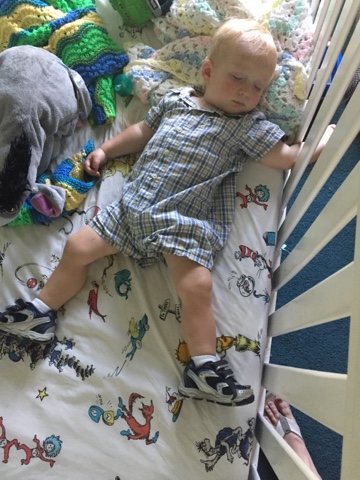 I have stolen away into his room some nights and snatched him out of bed and rocked him just trying to soak up all the baby I can before he gets his big promotion in less than one month. Some people wonder how you will ever have more room in your heart or more love to give a younger sibling and God always provides.
at May 19, 2017