Here's to the birthday girl... 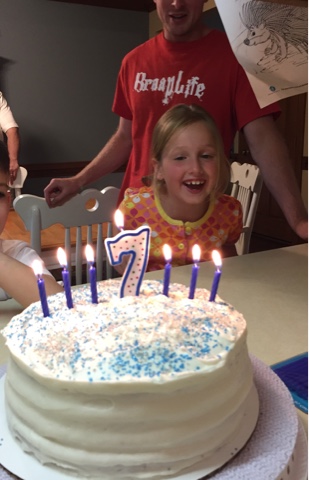 We celebrated a birthday this week. It was decided that we'd have our family + 1 friend gathering on E's actual birthday because her birthday is wedged right between Mother's Day and one of the worst weeks of pool season. Which called for Chik-Fil-A and a cake made by Grammy - per E's request (I convinced her that putting the Lei and R2D2 legos on the cake wouldn't be the best of ideas. 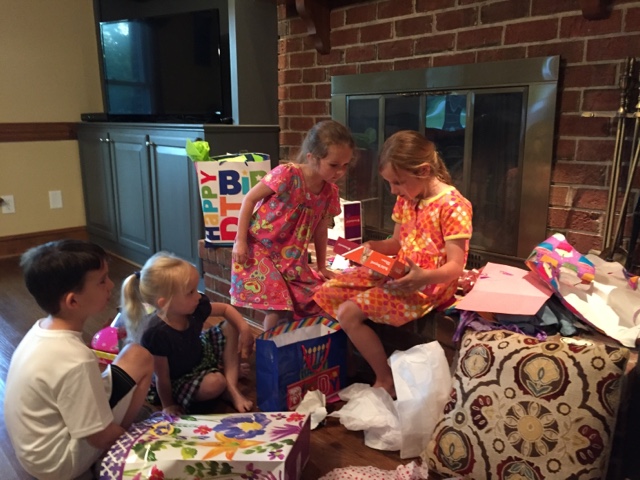 E - you probably had one of the best birthdays ever and you just don't know it yet. It was simple but awesome. Because you speak up and tell us EXACTLY what you like and dislike you are an easy read. I did manage to pass off a few surprise gift ideas - but each gift you received you have commented about how you really like it or can you believe they make that or that person did SUCH a great job on that present. I'm still not sure if you convinced R to tell you what the kids got you because you are a sneak - just like your mama. Plus you got a bit of money to go to Lego camp and buy some books - which I already owe you change for and I'm sure you won't let me forget! 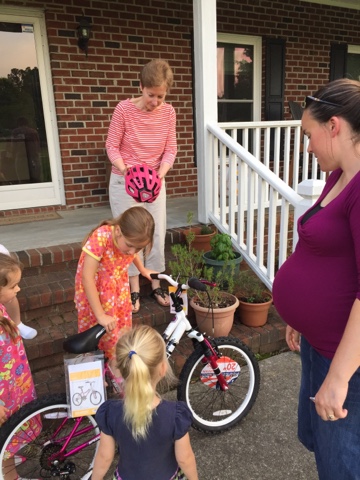 I don't think you were terribly surprised by your bike. You kind of needed one. You were, however, quite surprised yesterday when the back brakes failed (because they came unclipped) and crashed into one of Papa's trucks - it was either the truck or the brick house so you chose wisely and put a sizable scratch in the truck and did a number to your handlebars but were really no worse for the wear. We got the bike back up and running thanks to a neighbor and you're back to figuring out the handle brakes and gear shifter - which is terribly unfair to have on the right side of the bike when you are left handed.

You've had quite a year. This year you figured out how to swim and ride a bike on your own. You've got brave enough to pull out your own teeth - but mainly because I told you I gave you 4 freebies and the rest you have to snag. You are such a bookworm - it is kind of crazy. You'll read through a short chapter book in no time. Currently you LOVE Rainbow Fairy books - which I think are beyond silly but what do I know. School comes quite easy for you and you have an awesome class of kids which you probably won't appreciate for awhile. You have taken to year round swimming and soccer so we'll see what you pick to do this year. You finished 1st place in the Rocket Mile a few days ago - something you have wanted to do since last year. You LOVE American Heritage Girls - and hate to miss a single meeting.

You are a great biggest sister. You can be loud and bossy at times but I'd like to think that goes with the territory and you are learning (like me) that raising your voice doesn't solve problems. You can be super caring and protective to your sisters and brother. You are excited for baby #5 to come and are begging to know what letter the names start with. You wear your emotions on your shirtsleeve so you have amazing highs and meltdowns for lows. You get frustrated very easily so we have to talk you down into reasonably reality often. You are becoming more of a helper and realize there are chores to be done (I'm sure you are going to want to get that Chore Chart going!) You surprised me the other day by taking a load of clothes upstairs WITHOUT me having to ask - it was miraculous.

So to the loud, left-handed oldest sister - we cannot imagine a better firstborn to lead the way. We are blessed and beyond thankful that God gave you to us.
at May 12, 2017