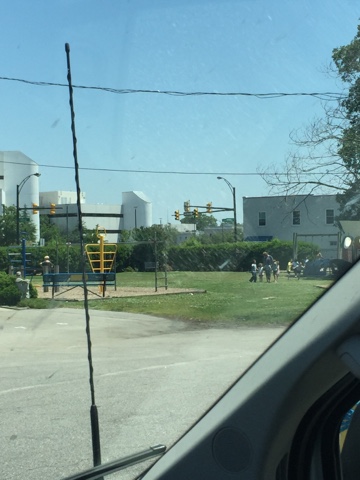 R starts K is just a few shorts months. There's not nearly the unknown like there was the first time with E but I still don't want to forget that this whole K thing is still very new to R. She hasn't done it before but I have.

With E we toured the school like a million three times and one of those times E came. I think we stayed for about 30 minutes and she poked her nose around and I was there with her and that was that. This spring I wanted to afford R the same opportunity but it didn't happen between going to China and doctor appointments and work. It wasn't in the cards.

This year the school offer a 'move up day' for all the grades which was awesome and in my mind fulfilled the tour that I didn't get to take her on. It was arguably better because there were other new kids and they got some time together in the classroom with their teacher for next year.

I was bummed that parents didn't stay (not like I would have wanted to with M and A during their rest  times) BUT I wanted to see how she did and get some details and stuff - and R is as tight-lipped as they come and she couldn't even dangle a name out for me to hang on to for the rest of eternity. Which is fine - I guess.

She ate her 'big school' lunch in the van on the way to school after preschool. She ordered the same lunch that E does - PB and honey sandwich, a cheese stick, grapes and 3 Hershey Kisses (that I don't even touch the containers of in my most chocolate craving moments - they are RESERVED for and ONLY for big school lunch). Oh and a Chia + OJ to drink but I don't think she's going to be sold on it for too long.

My one saving grace was that I was dropping her off right at the transition from lunch to recess and fortunately E was going to be on the playground so we talked that morning about being sure R wasn't feeling left out because she might be nervous.

And that's how I left her on the playground of big school and she was off and so was I. I'm definitely still not ready for her to be gone in the afternoons and neither is M. M will certainly find her own way next fall and probably get in big trouble for playing with the Legos and Barbies upstairs without any big sister supervision. I'll probably, actually be okay with only have 3 little people at home instead of 4 because new baby will be here in four short weeks.

I'll still miss her a ton and probably want to go have lunch with her the first week of school - but I'll resist the urge until at least the first month. I won't start drilling her on sight words now even though the box with the laminated color-coded 30 sets are right at my finger tips in the depths of my closet. We'll save those for the fall and savor the summer. I can foresee arguing over the Deneilian letters that drove E crazy the first month of school because she ALREADY KNOWS HOW TO DO her LETTERS. And that k will be killer - even I don't love it. But it's okay. We'll get through.

You've already picked out what beach towel you want to be your rest towel and you'll probably walk in on the first day wanting to take a million AR quizzes (because you and M already do them - apparently). You'll probably check out those CRAZY Margaret Hillert books that drive me BANANAS - and that will be okay. You will do great in K - I just know it, but that won't make it any easier for me, even though this is my second time around.
Catholic School things i think