And if by started I mean planned. We are doing a week early but E's bday is Mother's Day weekend and one of the two friends that she wanted to come {aka I am letting her invite} could not make it. Panic! We have bday party and BBQ the weekend after Mother's Day. Party planned in 12 hours for 168 hour later. Whew.

HT came through on the cake. Or is going to. Apparently Little Mermaid is not popular anymore so I had to buy some figurines and say 'have at it' to the cake decorator. I have full faith and confidence. Last year the Tinkerbell cake was super cute and well decorated but they had a pattern to follow.

Party City for the plates and napkins and take home cups and princess tiaras. CHECK-O. Now it just needs to get here... ON TIME.

One small little detail.. The balloon. E loves balloons. I don't like the ones that pop so I spring for A Mylar one. HOWEVER Party City is out of stock of the Ariel balloon... And my other option is $15 balloon bouquet. Emmm... Negative.

Amazon... I have two options. The round one which is my second choice round - $3 - because the first choice round is again... out of stock. Then there is massive Ariel but it is $5. 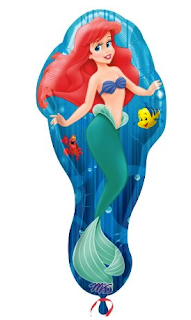 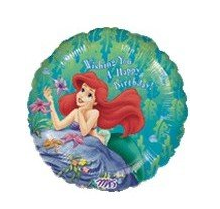 Which one should I go with? I need to decide in the next few hours so that it will be here in time...  HELP!