It turns out that 300 dozen pierogi actually does not fit in one freezer - or two - the pierogi overflowed into our family freezer - which is totally fine. Just threw a wrench in where the kielbasa are going... E is going to play at Jibbe's tomorrow morning as the pork and garlic and casings fly around our house. R will hopefully take a good nap either in the am or pm.

--- 2 ---
2.5 secs after Papa got home we raced to Raleigh for Grammy and Grandpa Joe's Marti Gras party. I think we have one decent family pic so I'll post those in my February update - though I don't think I ever did one for January... Opps!

--- 3 ---
Now onto Sunday. Downton Abbey finale. After catching up on season 2, Lee and I decided to NOT watch the DA finale. Having given up TV during the week we still have not watched it. I am so bad at not looking so on Tuesday I finally gave in and read several people's rants and raves about the finale. Well, I am way mad - to the point I don't want to watch the show anymore! I cannot believe that is what happened. I told Lee and he is probably going to force me to watch it with him. - because we really don't watch too much together - Person of Interest, Chopped, Iron Chef, 19 kids and Counting - Lee is not a big fan of the last one and last season was kind of boring so I don't know if that will continue. Got any shows we should watch?


--- 4 ---
Monday brought swim lessons. Well the teacher we like was back. I told her we missed the first class and I did not know if we could make it up... Background - there are only 3 kids in the class. She said no. It did not matter if the kids were sick or whatever. Okay so the next time my kids are sick and have pink eye - I'll bring them to swim class and spread the love because 'there are no makeups'???? Please. If there were 10 kids in the class then I could see that would be a problem but for really I am paying $10/half hr class - I think I should be able to have a makeup class. K thanks.


--- 5 ---
Oh wow. Tuesday was a second and final attempt at Presanctified Liturgy. Note the FINAL attempt. I had high hopes. I came prepared with snacks and cups for before Liturgy. E did moderately better - only because there was another little girl a bit older to keep her in line. R on the other hand did no better. She desperately wants to get down and crawl around. I got over the nasty floor thing but she was crawling in and out of the chairs - and I cannot have her be a distraction - that is not fair to others. Well she was inconsolable once Liturgy ended and despite have brought more cupcakes (I used less Soymilk in the frosting and it was 100% more fluffy) so we left without eating dinner : ( and E forgot her umbrella - small crisis. Fortunately Fr. Mark and family recovered it before they left but there were tears shed over that!. Anyways, lesson learned we will NOT be going back to PL - maybe Holy Week. But I am getting nervous about that now too!!! Can we make it through PL on Wednesday, Holy Thursday, Good Friday, Holy Saturday and Pascha? I think Holy Saturday might get nixed if we are melting down - last year I remember was quite manageable with two. I think R will be better once she can walk around. I think E will be better when she realizing that running back and forth from her seat to me in the back is really not good in church. Oh well... Not worried about it - I can't be. 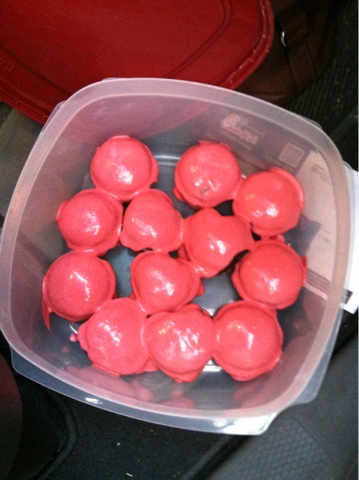 --- 6 ---
Speaking of things I made. I made dinner on Wednesday??? Yes I know. Cupcakes one day and lentil soup the next. Pretty crazy! I got it from the slow cooker recipes book from America's Test kitchen. I think its a winner and it even had Swiss Chard in it so it was healthy too! For dessert our dinner guest brought the OverStuffed Oreos. Those are kinda ridiculous.

--- 7 ---
Last night Lee and I went to the Pregnancy Care Center dinner which was super nice to finally get back. The speaker was entertaining and the food was 100 times better than I remember it back in 2010. This morning there is another 2 hr delay for rain. AHHHHHHH!!!! These news channel scare people in closing/delaying schools. It is so insanely crazy! Tonight Fish Fry and Stations is on tap. Really hoping that R will not meltdown. I am thinking total change of scenery AND Stations is probably about 45 min instead of double that. Am I being too optimistic?

Next week we don't have an activity every night - which is a welcome relaxation.