Thanks for making my night E : )

Point to Explain numero uno - Papa has this thing that he 'needs' white noise and thinks that our children need it too so that is why there are fans and humidifers and noise machines going in our house all the time. I have gotten used to it but there is hardly ever 'silence' in the house.

Point to Explain numero dos - I have been silent on this front. Two weeks ago I struck a deal with E, I told her if she kept her diaper dry for 7 days she could start wearing undies to bed. Her BFF J has been diaper-less for a while (and happens to be almost a year older than her too). ANYWAYS, here's to peer pressure! Well the girl kept the diapers dry for a week straight. Now we are on 168 hours of undies only 3 yr old! It is pretty awesome. Fortunately she has not had an accident at night yet - but I fully expect it to happen at some point but props to E.


--- 2 ---
Let's see. E helped me finish shopping for Papa's Father's Day presents yesterday following her dermatologist appointment. Last year she had this crazy ringworm turned non-ringworm rash that was ultimately deemed dermatitis. Well Tuesday I saw the ring signature in a totally different spot so Hi Ho its off the the dermatologist we go (The Mount has one single dermatologist who accepts insurance and I have been quite happy with him). Last time we had to go to the peds office and first and a few months later we got referred to the dermatologist - this time straight to the big guy. Dermatitis again - good thing because that ringworm medicine is a mere $130/tube WITH insurance.

--- 3 ---
Right so Lee's Father Day presents are pretty darn awesome. I have only eluded to E about what she and R are giving him because I want it to be a surprise and she has already described the card she picked out for him. He knocked it out of the park with my Mother's Day present so hopefully he'll think the same. One present is one that he will use and the other is something that he's been on my case about needing...

Oh and how about this was a year ago on Sunday! 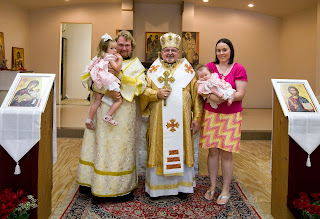 Happy One Year Ordination Anniversary FDJ! Seriously, I am so happy/proud/in awe of EVERYTHING you do for our family and our church (and at work too, especially this time of year : )

Speaking of Dad's where would we be without our dad's? Well pretty sure that my garage door would have been open all day yesterday with all our stuff exposed had it no been for my dad.

And I think the girls' potty would have been stopped up forever and ever and ever... E is taking good notes. 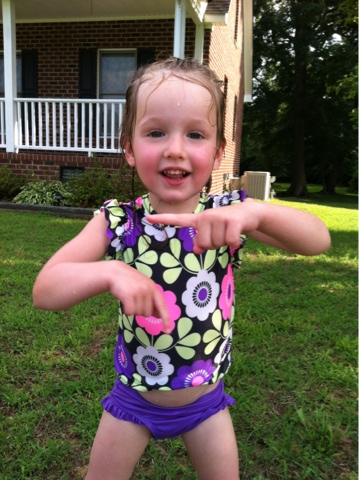 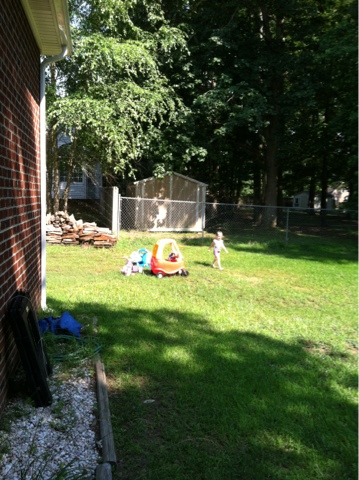 --- 6 ---
And yesterday was INSANELY hot but I would rather be hot than trapped in my house with the girls... so it was outside with shade, sand and sprinklers. I think that is going to be the theme of our summer, shade, sand, and sprinklers.

So R has wild hair and I have no idea what to do with it so she was going into dino baby mode yesterday to stay cool. It was hilarious and cute all at the exact same time! 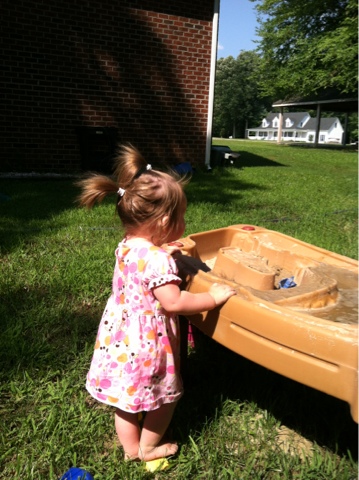 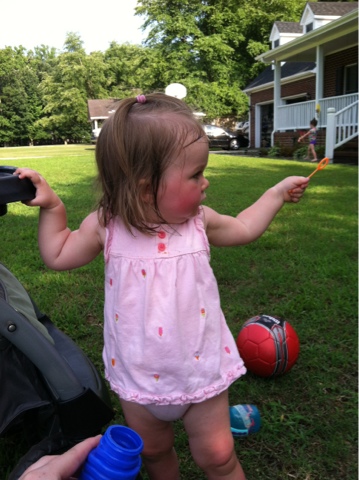 In addition to trying to blow 'bubbas' which was a funny sight. She has gotten a little braver this week. She'll randomly stand up and look around and plop back down again. The boys at school are walking circles around the girl so come on baby peer pressure, I am totally in favor of you!

Oh and just to end this on a Father's Day note; Lee leaves the house so so so early  - as in the 6:15 am hour early and if R hears noise or the door chime go off I can hear her from the crib, "Papa? Papa! Papa?" - so so cute and so pitiful too because I know she just wants to see her Papa!