Week In My Life - Miercoles

Where'd we leave off… Oh with Lee not being home.

Well lots of things happen when Lee's not home. Like long snuggles and reading with E and R in bed. See previous postS.

Well some things don't happen when Lee's not home… Like coffee getting made in the coffee pot. I was TOTALLY opposed to the Keurig because it is expensive when 2 people are drinking at least 2 cups of coffee each a day. Plus I happen to PREFER coffeemaker coffee taste. BUT the Keurig was not a point I chose to take a hard stand on, and I do reap the benefits of the thing when Lee's gone.

He's in charge of the coffee. Honestly I couldn't tell you the amount of coffee needed to get it to taste the way I want! Setting it up the night before so it is ready at 4:30 - yes in the A to the M. He is easily up by then. I'd like to say I am but if I can roll out of bed before 5 it is a good morning. 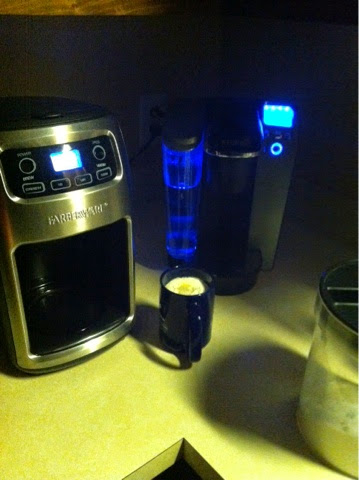 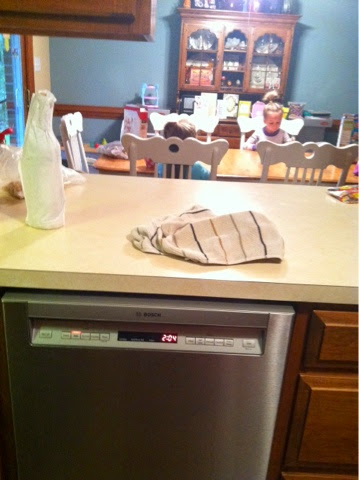 Okay not really… I'll tell you. 2 hours and 4 minutes on the dishwasher at 7 in the morning! Grrrr…. #firstworldproblems I know, I know but really?!?!? No clean cups for school so juice pack for E, old plastic baby cup for R and cup from last night for M  - because she won't use those hard lid cups. She's all straw. I knew I forgot something last night!

Work was a blur and apparently before we made it inside we had a visita from our neighbors before the lunch rush. We've got some great neighbors who moved in a few months ago and we're not giving them back. Finally E and R have kids two houses down to play with. We have awesome neighbors up the road too but packing up and heading their way is not as easy as it was. Goodness I love our neighborhood. I really believe that we are living exactly where we need to be! 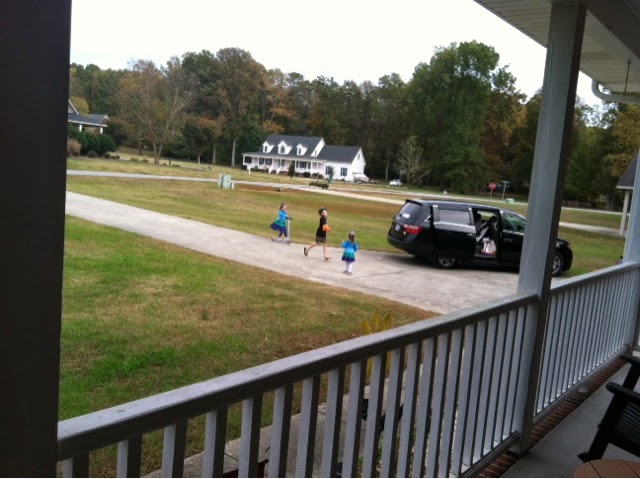 Oh and these came in the mail which I am SUPER excited about... 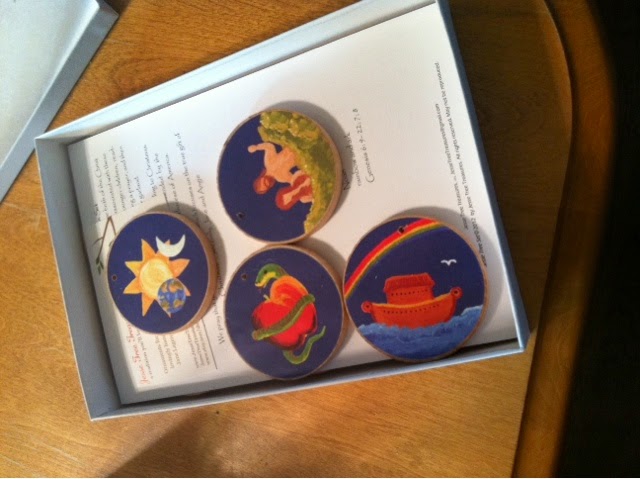 Starting a new Advent tradition in our house one day at the time, one ornament at the time… More on that when I link up with Theme Thursday this week because I found the *almost* PERFECT Jesse Tree… 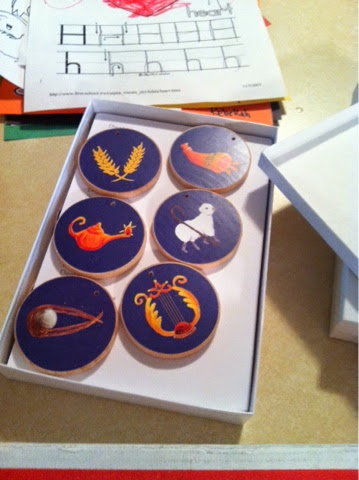 Clothes… We have such generous family and friends that shower the girls with an abundance of cute clothes… It can be overwhelming. You know what I'm saying??? yet another #firstworldproblem. I was talking to a mom after church last month about spending too much time organizing, going through, sorting out, changing seasons and packing away kids clothes. Definitely not complaining here but to those who are daunted by the clothes piles post change-of-season-clean-out… solidarity here. I'll show you what I do with everything on Saturday of this week last week. But anyways, these clothes have been on the back of this chair since ohhhhh… Monday and since Papa was due home in a few hours, they needed to disappear. 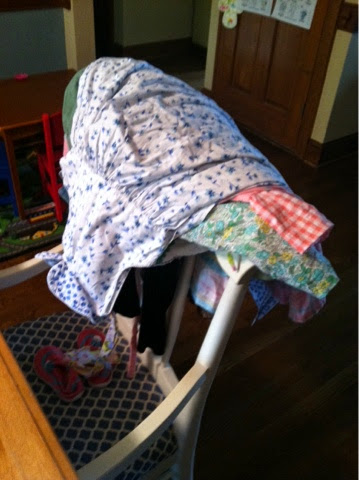 Another home office shot. Please note the home phone must be used for work calls because - of course - my cell phone has horrible reception. In my house. AT MY KITCHEN TABLE. Sometimes I'll get a call on my cell and run out the door to answer it and realize I'm in my 'nice-ish' work shirt and running shorts. Don't worry, we have neighbors who don't judge me : ) . Also, worth noting E handing my all her papers from the day adding, "I made this just for you" - cue Mama guilt for recycling most of the papers after I've snapped pics of it. 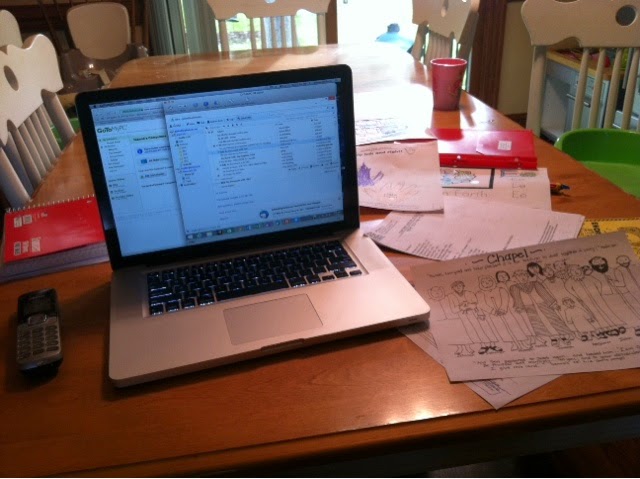 Pick the thing that does not belong… On a street with 6 houses and a farm field at the end. 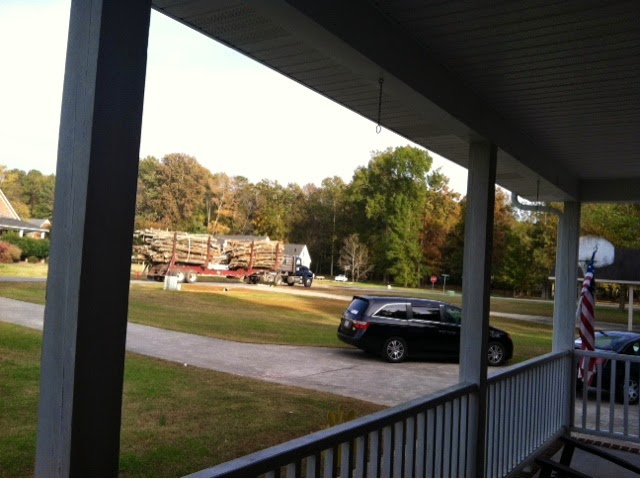 Nope you saw that right… Some crazy person who owns the land behind us decided to rightfully chop down 10 acres of trees last week. It was insanely loud and annoying and I felt like reading the Lorax. I mean, I like my trees. I like liked my backyard with the trees that fill in the back 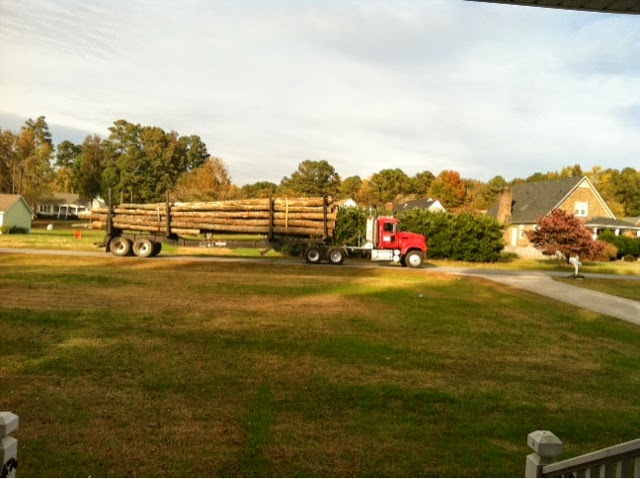 M was up early so I let her take a spin on her other present that the big girls are not allowed to play with… The Scramble Bug. I've seen a bunch of kids stuff but this was a new one!

And she loves it. 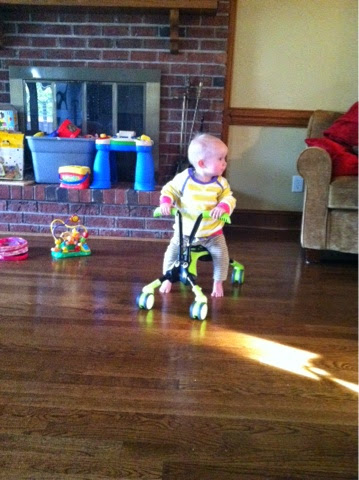 And I've found taking pics with my kids is kinda awesome 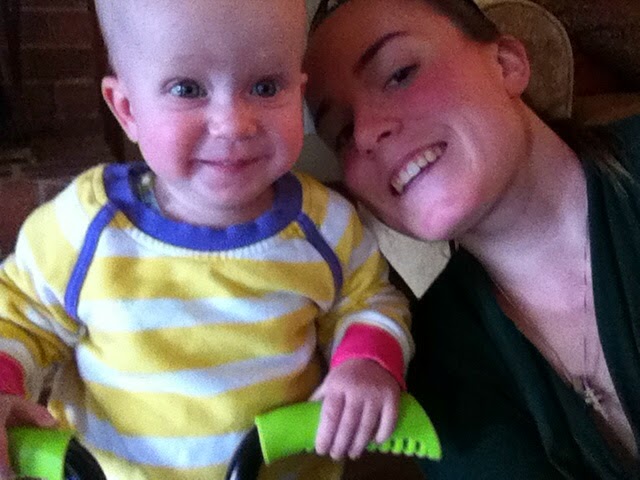 Another for good measure... 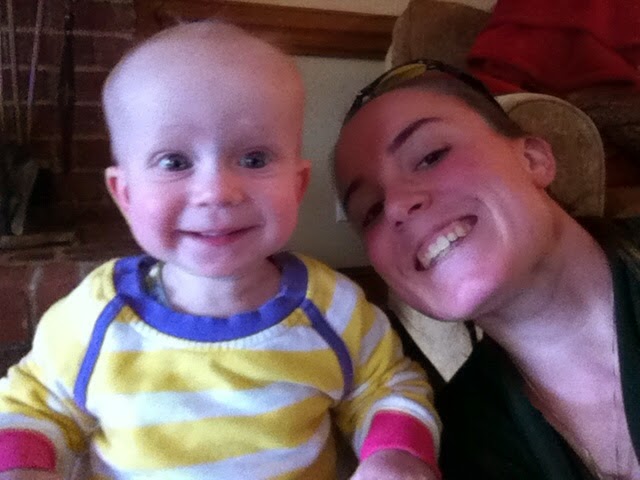 Backed into the chair 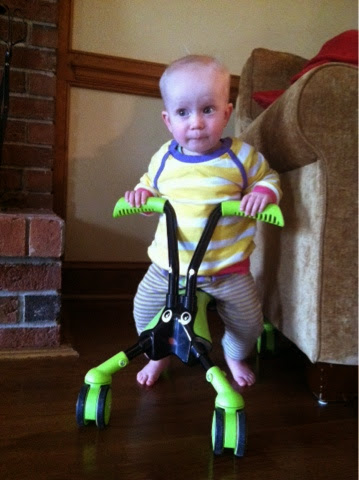 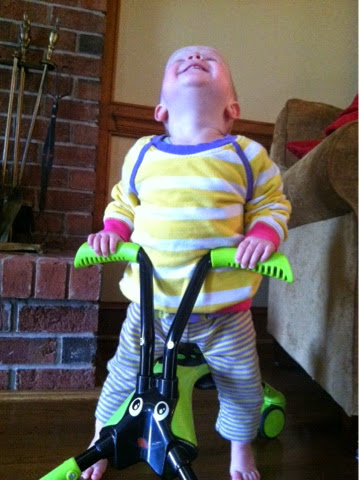 After the ride was over, M maneuvered her way to the frig and recked havoc on R's potty chart. Oh, R's been wearing undies to school this week (really last week but also this week too!) and no accident. Thank you Lord!

Anyhow, she's not interested in her potty chart. She's the instant gratification type so treat now or potty star for eventual ice cream trip? You can guess what she goes for…

But E on the other hand has hawk eyes on the potty chart and begs R to pick a potty star… But that does not happen so when rest was over you can guess who lost it when the potty chart was found to be in 2 pieces… Yep… It was E. 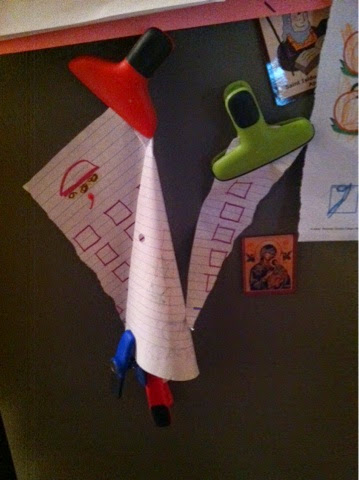 Moving on… outside. I took this pic to remember how tree-filled the back was. The trees were tagged just passed Papa's building so we were doomed. 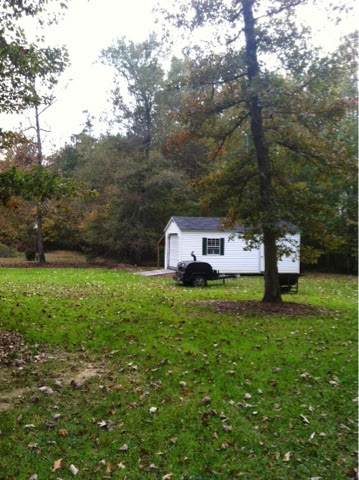 This is what we found at the end of the street. It was actually quite impressive. The yellow machine would grab a trunk... 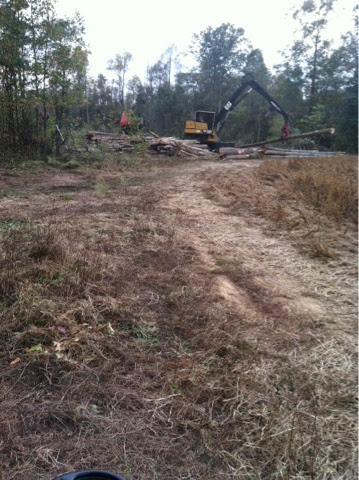 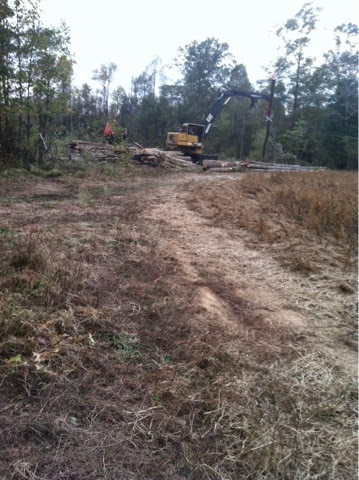 Put it in the orange thing... 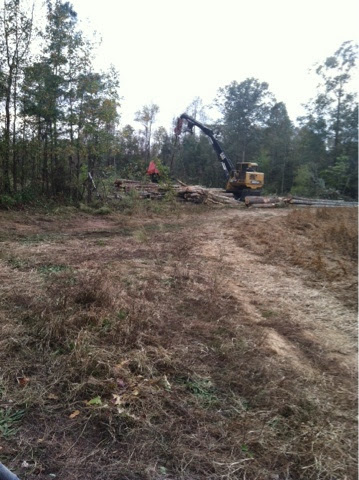 And the orange thing would cut off all the branches. It was interesting but I still hated it! 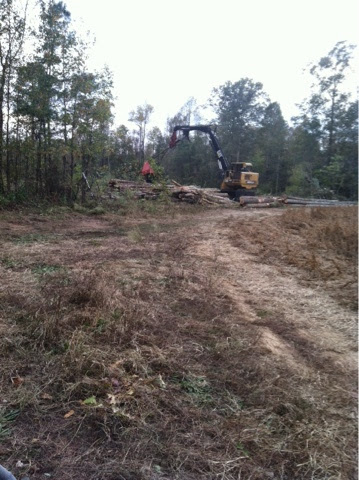 Then Papa came home… With 300 dozen pierogi. Can we say hello church fundraiser? 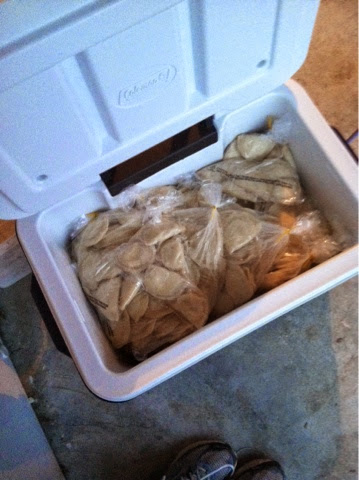 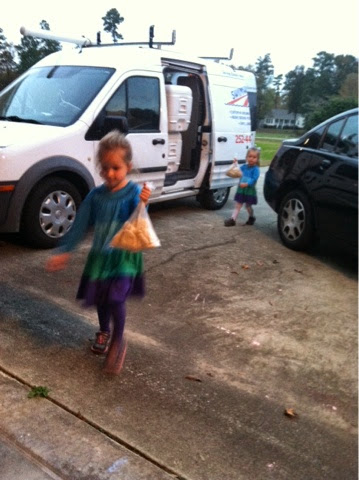 One bag at the time 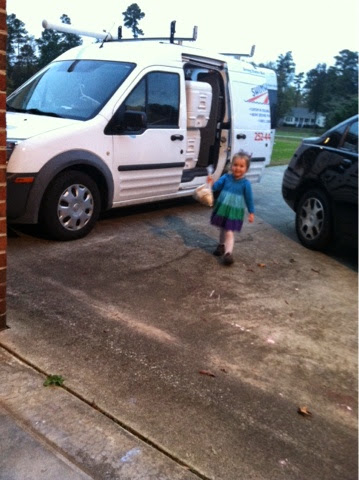 I think there were 5 or 6 coolers full? 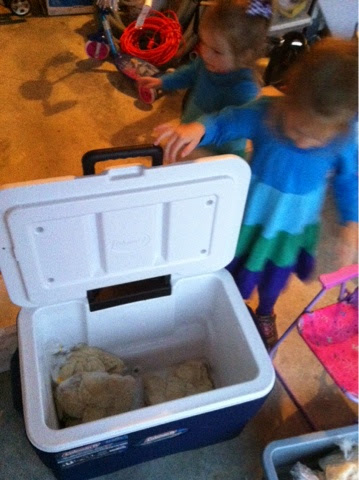 From bakery to cooler to freezer all in 10 hours... 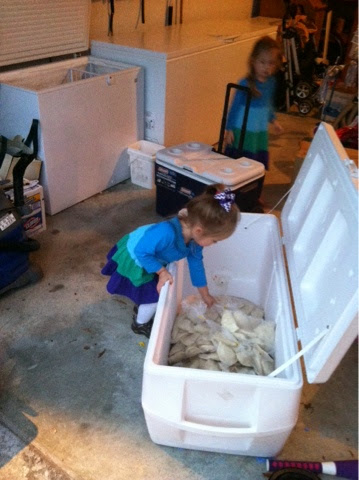 Watch out girls, you'll be washing dishes next! 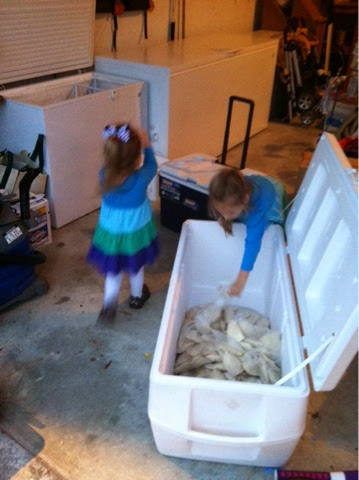 Done and my fingers were not even too frozen 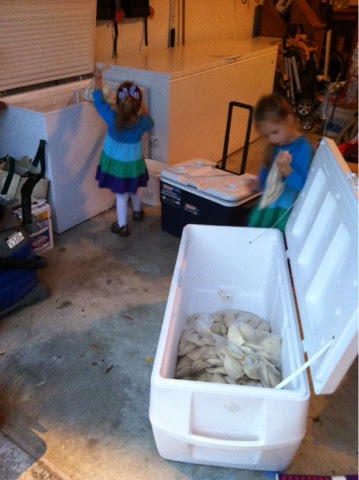 Somehow I don't have a pic with Papa for today but I promise tomorrow he will make an appearance!
at November 13, 2014

Email ThisBlogThis!Share to TwitterShare to FacebookShare to Pinterest
Labels: advent adventures, outside with the kiddos, week in my life