Things that make us think... or laugh

Allow me to preface this: We don't just dole out dessert in our house... It is earned daily and can be taken away daily - for just about anything. Screaming, fighting, meany-ness, not eating dinner - your general run of the mill behavior issues. Recently E and R have not been getting dessert because of their spats of the CRAZIEST stuff - and they've gotten ample warnings. M generally doesn't get dessert because she barely eats any dinner (though she would happily eat ChexMix for every meal) and just as an example... R didn't like the quiche we had for dinner last night so she simply didn't eat it and was okay with not getting dessert (E will fight to the bitter end before losing her dessert over not eating : )

For the thing that made Lee and I scratch our heads for the first time this week: 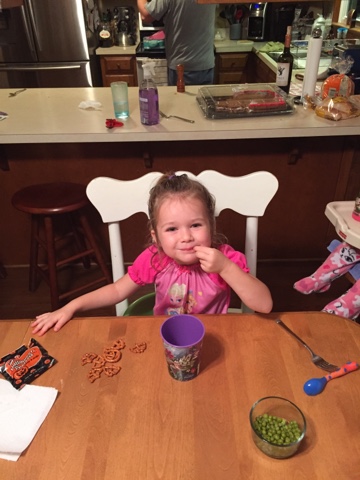 This kid hasn't had dessert in a few days and had the first pick at her Halloween Ziploc-Sugary-Stash. What does she pick? Not the Hershey bar or the Starburst or the lollipop or Twix but a stinkin' pack of pretzels. Lee and I stared at each other as she opened it and assumed she'd lose it over not getting a sweet treat but to our shock she HAPPILY munched on her pumpkin shaped pretzels.

Will I EVER understand how her brain works????

Speaking of brains or minds.... Our family calendar. It is crazy packed with stuff. Lee has requested I start color coding  it. But I haven't gotten that far. Anyhow, I have to look at this thing several times a day and E has still forgotten Show and Tell at least twice this year! So I know dates and times and days pretty well (did you know Annunciation 2016 falls on Good Friday? - apparently its a liturgical nightmare : ) So I was totally thrown when I saw this: 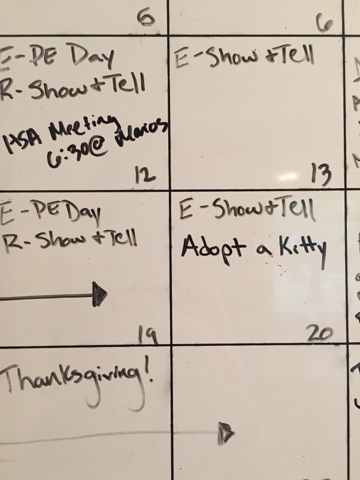 I asked Lee about it and he had no idea how it got there. I was starting to think I wrote it in my sleep. Then the next day it dawned on me that it wasn't my handwriting - but pretty darn close - maybe a relative of my handwriting... Uncle Kev the 2nd funniest guy - my dad is the supreme joke-ster - was at our house Sunday for M's birthday. It did take me until Monday night to realize it was even on my calendar. Nice one Kev... glad to know I'm not going crazy.
at November 12, 2015