Now that life is not moving 10000 miles a minute and I can think without the normal background antics... 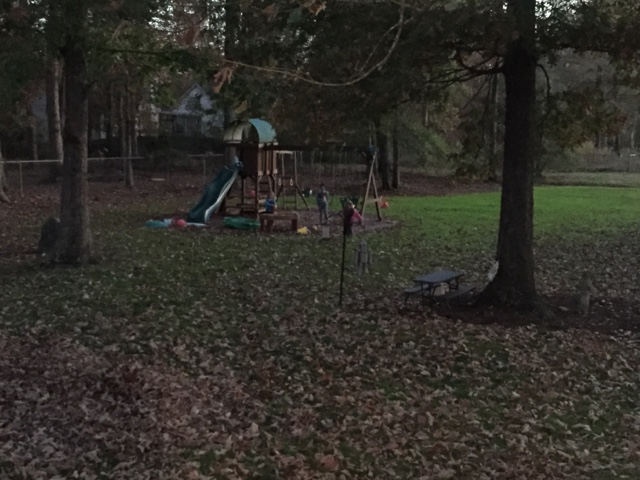 The girls played outside until it was nearly dark. They got wet, cold and dirty but they were happy...

In other visual thought worthy news: 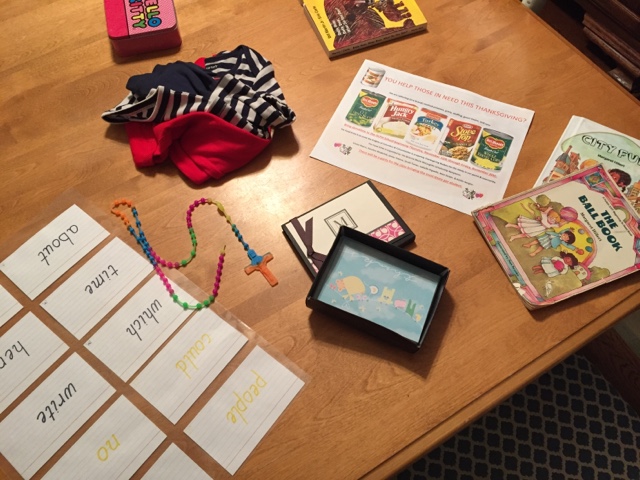 - sight words need to be cut out (and hopefully learned)

- Another rosary bites the dust : ( and E got this from the treasure box today and she doesn't know M swiped it from the counter and snapped it. I have to find some indestructible rosaries before Lent - because you know we only pray rosaries during Lent - according to E during show-and-tell at her (not Catholic) preschool last year

- Thank you notes... We have some mighty generous family and friends and between A coming home (a month ago !?!?!?!) and M's 2nd birthday - there's some thank you notes to be written

- Advent Activities - I've been thinking about this one a while now because Advent sneaks up on us. We'll steady the course from last year with:

1. Daily Jesse Tree - awesomeness
2. Weekly Family Activity - first up is E's school's Thanksgiving food drive (thank you easy one), second is Operation Christmas Child (which barely squeaks in as a 2nd week activity because of the collection schedule), third week is collecting/sorting out toys to give St. Nicholas - so that leaves 3 weeks. Last year we prayed for some friends and family who died (at their graves), E's class went to a senior center and sang songs (that one's certainly not as easy this year since we just tagged along BUT it was totally worth it), then we made Christmas treats for teachers, friends and neighbors. So I really have at least one blank week to fill in. HOPEFULLY something easy will pop up because me + complicated aren't mixing at the moment.
3. Daily O Come Emanuel. We may or may not have started listening to it in the car this week. Love that song and E loves it in Latin (of course) but the CD only has 3 verses so I'll get the real lyrics out

- How in the world did we end up with not one but TWO Margaret Hillert books this weekend! Seriously, these books. ARE. SO. WEIRD. The first couple were about a Dragon and weren't terrible because E wasn't attempting AR tests so if we didn't understand it then we could just make explanation up. But a few weeks ago she brought home a Golden Goose book that was so not understandable I had to GOOGLE the book to find out the premise of the story. No. Lie. The words don't explain the pictures and the pictures were really telling the story. So I'll keep you posted on how bizarre her weekend selections are!

- How is A a month old? - Not sure how that happened

- Next August our eparchy (diocese) is having a retreat for deacons and their wives. I am excited about it. Sounds like a logistical jigsaw puzzle trying to farm out 4 kids for a few days but doable. I do hope there are some younger deacons there with their younger wives because well... let's just say most of the deacon wives I've met have a lot more wisdom then I do which is fantastic but it is nice to come across some of us who are lower on the wisdom-totempole. There are several priest wives (and deacons too) who are younger and it is so great talking to them. I digress.

- Got do A's footprints this weekend