No not an epic failure of a mother - not yet at least. Epic failure of my glucose test. I got the call from the nurse today. I thought I was in the clear because I did not get the call on Friday. 140... right at the cutoff!!! I think I will poke my eyeballs out because this is the second time I have been right at the cutoff!!!!!!!! My doctor hates me (no not really)! Though I think he thinks I'm weird for a number of reasons including the fact that I seriously considered and thought I could leave the country while pregnant. Apparently (according to him and my sister in law) that is a horrible idea but hey I listened - I did not go! 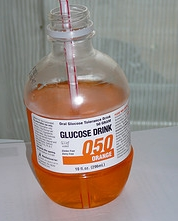 Anyways back the the frustration over the glucose test... I have been such a good little preggo-licous mama this time. I have gained half the weight comparatively then I had the last time, I have been very conscience about what I eat and all this for nought! Incredible!!! I even celebrated my victory over the test on Thursday and through the weekend (we were at my parents and yes there was a box of Famous Amos cookies that was 1. open! and 2. the bag was such that it was impossible to keep the cookies fresh = just the way I like them : )

So back to the labs for the 3-hour test. I love the blood taker - his name and Reuben and he is awesome! He'll probably be the highlight of my trip back - though he got me good on the one hour test so we'll have to have a chat about that! I have some beef with the 1-hour test - 1. there is no baseline. Meaning that there is no blood drawn before you drink the sugary goodness - with the 3-hour test there is - you cannot drink the mess until your blood is drawn. The result from the 1-hour test is just a number whereas the results from the 3-hour test provide a true delta (change) over the time interval - basic science people!

Speaking of basic science, there was a woman there taking the 3-hour when I took the 1-hour and she had water that morning when the directions are clearly to not eat or drink ANYTHING - very clear. Here's the kicker - she was a nurse. I just don't understand! Not here to judge because maybe she was super desperate but really you are going to risk failing the 3-hour test!!! No thank you.

So as my level of annoyance will only escalate over the next week or so until the test, in the short term I must find something to do for 3-hours of my life that does not involve work because there is no wi-fi in the office and does not involve little E. Last time, I read the unabridged version of a book that I cannot remember - I don't think it was Crime and Punishment - anyways. Not doing that again. Maybe I'll work on my cross stitch. Long term decision is that if there is a next time around I will not take the 1-hour test. I will demand the 3-hour test first so that I don't completely waste two mornings. I mean really what I am supposed to do with E??? How do people find time to take off work! Fortunately I have highly flexible jobs and family that put up with this insanity.

Also, great news of my last appointment - starting in December I have to go every 2 weeks!!!!! I told my doctor 'no' and he laughed and said what do you mean 'no'. I love my doctor too. He tells me things that I need to hear  - not things I want to hear - which is important because he is doing his job and looking out for me. If I did not want his opinion I would A. not be paying him the big $$$ and B. probably would just show up at the hospital in labor and forget prenatal all together - which is a horrible idea. So I will be an obedient patient - not afraid to push the limits and voice my opinions - and go back for the 3-hour glucose test even though I was only off by one point.

I guess its' true close is only good enough in horseshoes and hand grenades : (
at November 07, 2011