Not too long ago on a visit to my parents house we came back with a few goodies for new baby. I had to do this post because it is incredible to think back on the times when Little E could have fit into the yellow stars outfit!!! I think the super small baby outfits are made extra soft and this one is no different! I still cannot get over the fact how tinnie tiny this one looks compared to one of E's night night outfits! 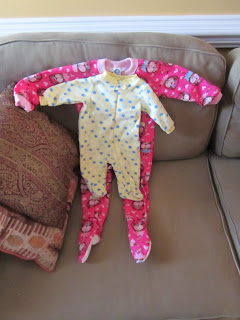 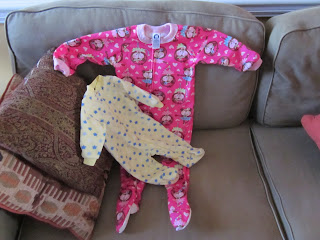 One day E will be able to hold her little brother or sister just like in this pic but for now she quite alright pointing at it and saying baby. It is interesting though that she had not tried to put one of her baby dolls in it though. Its' almost like she knows that her babies are too small for them or that they will not fit into the pajamas. I don't know. Its' weird she knows that this outfit is for baby for sure and that's really all she knows. 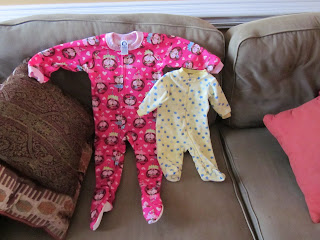 For now the pajamas and the little sleeper (not pictured) will have to hang on the back of the rocker/recliner because I have to get some more Dreft! I washed E's clothes in Dreft while we had the one large container that was a shower gift - which lasted a while - then I just started washing her stuff in the normal detergent. Just one more thing to put on the pre-baby #2 list : )
at November 18, 2011