7 Quick Takes - It is so hot you'll burn your feet on the cement edition!

Me - I think I passed the exit. Where are you?
Lee - I'm in the parking lot. Shoot chicky... Is the {blah blah} exit just turn around and get off on the first exit.
Me - {click}

Me - Okay what part about 'I'll follow you because I don't know where I'm going' did not register?
Lee - Ummm... When did you tell me that?
Me - That is the last thing I said to you in the parking lot at church
Lee - Oh, I'm sorry chicky

{We did make it to the Farmers Market after the failed following Papa attempt. No corn or watermelon yet so E was sad but R loved trying the blueberries and strawberries}


--- 2 ---
Yesterday was my parents anniversary - go them! And best part of all, I did not miss it - go me! Last year my brother called and said you know M&Ds anniversary was the other day.... Effffff.... I missed it. This year I had it on my calendar - only it turns out I had it wrong and I clarified that point BEFORE the day - so other than the card not getting there on time. I am leaps and bounds above my stroke of brilliance from last year.

--- 3 ---
This week it decided to be summer... full heat and has stolen Papa away from the girls. E wakes up asking for him and every time I get off the phone R says "Papa, Papa, papaaaaaaa." Well the boys up the road got a Slip and Slide and were awesome enough to let E in on the fun - twice. Somehow I manage to never take pics of their fun. We brought Popsicles this week and the only cooler I could find was this massive one I wheels. I think the neighbors gave me some pretty crazy looks. All for the sake of frozen Popsicles instead of cold, melted juice : )

One day the boys were busy / I don't want to go there every day and take up their time and eat their food - though the mom therapy and just getting to talk to another pregnant mama makes my day - and we had to stay at home and do sprinklers. On that day we learned that R H-A-T-E-S the sprinkler and both girls are much more content when I fade into the background of the front porch and only mediate when absolutely necessary. 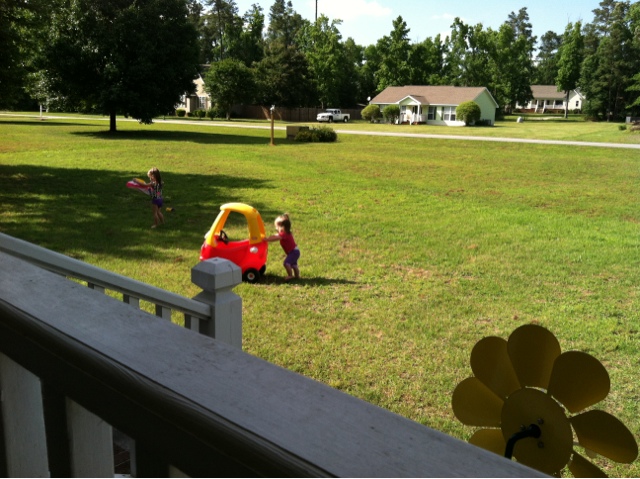 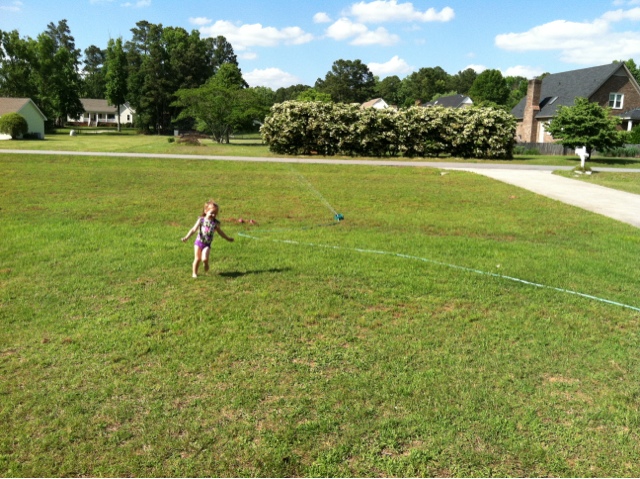 --- 5 ---
Last night I had a real stroke of brilliance and decided that moms definitely need about 5 or 6 hands - or at least I do. We went over to Jibbes for dinner and of course Papa had to work so food was sent back for him. Being the good wife I am, I got R in bed then went back to A. get Papa's food and B. take out a few items that were junking up the clean van. Phone, sippy cup, to go plastic box, tupperware, plus a tomato saver = dropped tupperware with coleslaw (it did not open so it could be salvaged) plus coleslaw ALL over the freshy cleaned van and garage floor. Microcosm for my week? Maybe just a little bit. So ready for our regularly scheduled program starting Monday! 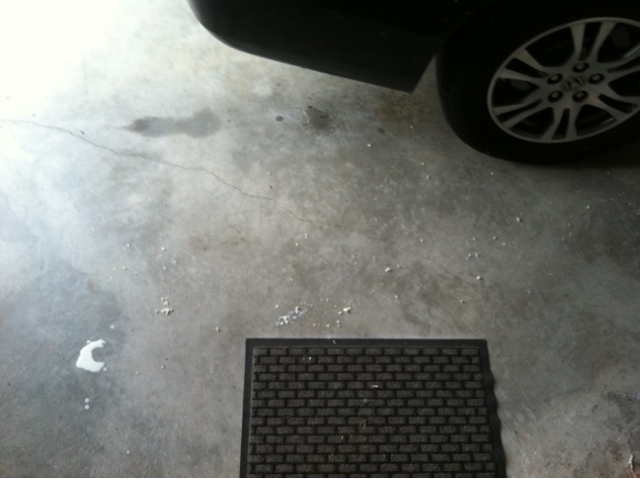 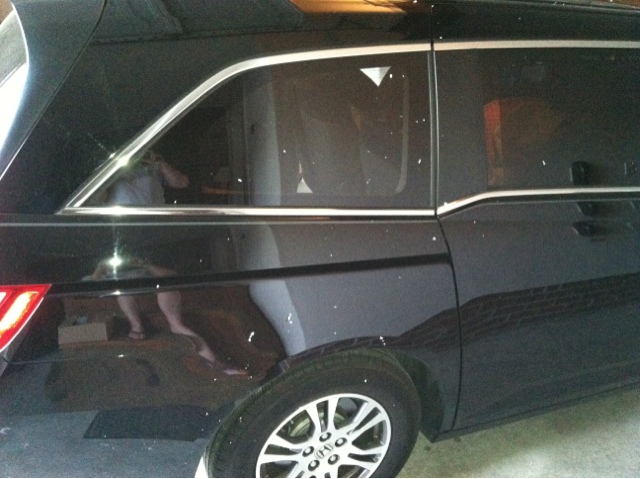 --- 6 ---
So, Wednesday was an interesting afternoon... General antics outside. Flying solo bath night. Eat Hershey bar to make up for the previous few hours - yeah I can do that because I'm pregnant. Then go to first the remaining Thank You Notes from E's birthday party (if they are out within the month they totally count). Go through 3 pens and 2 colors at that trying to get through one card and after the third one stops writing (only on the part of the card and paper I'm writing, it writes fine every where else), I freak out. Lee says to get another pen through he giggles. I have it out with the pen, card and coffee table. I swear off ball point pens. Realize that I have made the coffee table look like R took a fork to it and was unattended for 2 minutes. Destroy the card I was working on. Promptly go to bed.

I finished those cards yesterday finally. Now all E must do is 'sign' them and their off.

I was writing one when E was up and asked her what it should say... "I like my tent because I like it all the times ago"

R continues to do her Two Step (such a great song) - Three Step thing this week. I fact that she has been bare knee-ed the past week has significantly improved her willingness to try and stand. She does this crazy hand-foot (no knee on ground crawl) which is awesome. No photographic evidence of either..oppps!

Email ThisBlogThis!Share to TwitterShare to FacebookShare to Pinterest
Labels: outside with the kiddos, papi, pregnancy, quick takes, summer