To Rear Face or to Forward Face... That is the Question

Okay I know there are varying schools of thought regarding the rear/forward facing of carseats for kiddos between the ages of 12-24 months. The recommendation/standard is that kids get turned around at the age of 2 but there are a number of people I know who will turn kids around close to their first birthdays or a few months after - which is totally fine, simply an observation of mine. 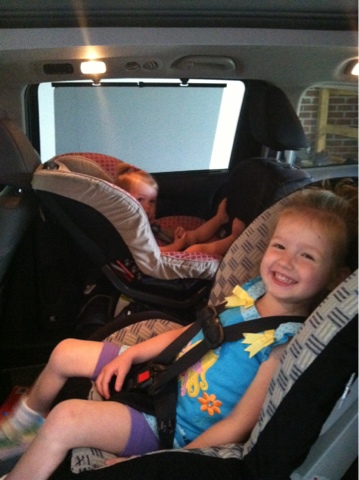 E's carseat was turned when she was about 18 months. We installed the infant car carrier and it just seemed like a good time. I am thinking that we'll turn R around when we move the big girls to the third row of the van sometime around the month of September - she'll be about the same age as E. R is much heavier than E so I think if I wanted to turn her any day I could. I simply cannot find a compelling reason to turn or not turn her. Since she is not miserable rear facing I figure keep her that way, you know?

We don't have a TV in the van so its not like she knows that she is missing out on something. She can be a bit cumbersome trying to load her when she is screaming or kicking but that is not the norm.

I'm open to thoughts/suggestions here. It seems to me that every other day there are new carseat standards - 2.5 years ago kids were turned at the age of 1 or 20 lbs or something like that. Now you're not supposed to use the LATCH clips if your child is over 30 lbs because of something... I appreciate the recommendations and new information but by some states standard of having a kid sit in a booster seat until they are 100 lbs - there are adults I know that belong in boosters!!!
at May 21, 2013