Today was E's last Fireflies game. Next week we have a spring program at school. Well let's say that two weeks off did not do the Fireflies good. The game was a bit rough. We had a few people in the goal, two crying girls and a few goals to show for ourselves.

E actually ran after the ball today... During one of the kickoffs I told her she could kick it. Well she kicked it once or twice and then the other team got it. She ran around field yelling 'no, no, no!!!'. Then she cried because she said it was her turn. I convinced her to run after it a few times - that it was her ball but she would not have too much of that.

We must have gotten in a circle and shouted Fireflies! 15 times but that's the part the kids liked the most so whatever. They got their snacks and trophies as we waited for pictures to be taken. Hopefully they'll look at that trophy and at least remember the two rules of soccer: 1. Don't use your hands and 2. Have fun. Hopefully they'll not be like me and look at the YMCA Blackberries trophy and think about losing EVERY single game. I was 5 and a bit competitive : )

Pictures were hopefully a success. I was one of the parents who definitely overpaid for a few pics BUT it was not too much and I think at least as the coach... I deserve it! 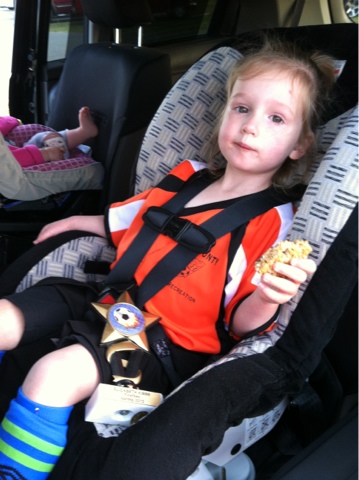 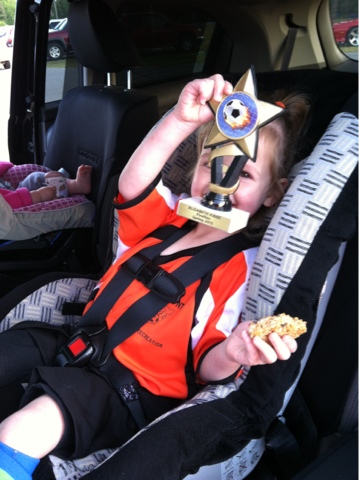