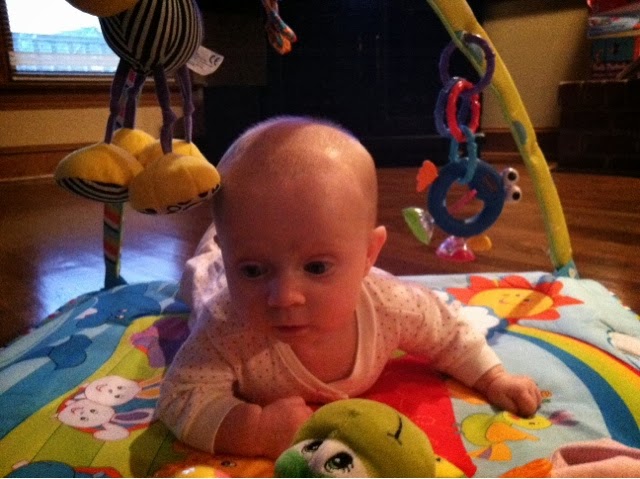 Let's think that over… my baby is 3 months old. Now how did that happen? Time is flying because it seems like I was just pregnant. Okay not missing being pregnant of course but still I am having some trouble wrapping my finger around having a 3 month old. But I'll try and move past that.

M is such a relaxed little trooper. She is patient with me and her Papa and her big sisters. She only gets super mad when she is hungry or when she is tired and does not want to be in her carseat (but then she falls asleep almost immediately in the car).

M has been rolling over for a few weeks now?!?!? Not consistently by any means and she surprises herself when she does. She is either really alert or really sleeping. She has the brightest eyes and if you talk to her you'll likely get a cute grin. She'll coo back at you a lot if she's laying down.

M has been kind to me at nights. She wakes up once or twice a night to eat and then goes right back to sleep. She will take a bottle which did take some coaxing. She is still 100% breast(milk) fed. Probably the longest time any of my girls have gone without supplementing with formula so I am thrilled about that. I have not done anything in particular in the sleep training department other than getting ready for bed and feeding her and putting her down. She'll fuss for 5-10 minutes but then usually goes to sleep (I say that now and she'll probably up and do something CRAZY this week).

She's been a great little worker bee. She has been good for me at both offices and let's me get my work done. She's been to Charleston with me and Papa for a work trip.

Her latest trick is she likes to get really stiff and stand up and look around. I cannot wait for her to be strong (and big) enough for the jumpers that hang from the doorways. She is going to go to town.

She survived Turkey Day and Christmas and got lots of love from her family especially her cousins. She has a friend up the street who is going to be such a great playmate and she does not even know it yet.

The jury is still out on who she looks like. E and R are so so so very different it will be interesting to see if she'll be in between them or what. She still has the sweet little layer of fuzz on her head that I like to runny cheeks over. I've never had a fuzz-head baby so we've been using the hair bow strap for special occasions.