Well we had once of our busiest weekends on record... Or at least that I can remember and my memory is horrible - I have 3 kids so that's a legit excuse, right? So here's a bit of what happened...

Saturday was kicked off by another great breakfast courtesy of Papa. Grits = fantastic. Not nearly as exciting as last Saturday morning. Then after milling around the house and laundering a few piles of clothes we headed off to a playdate... 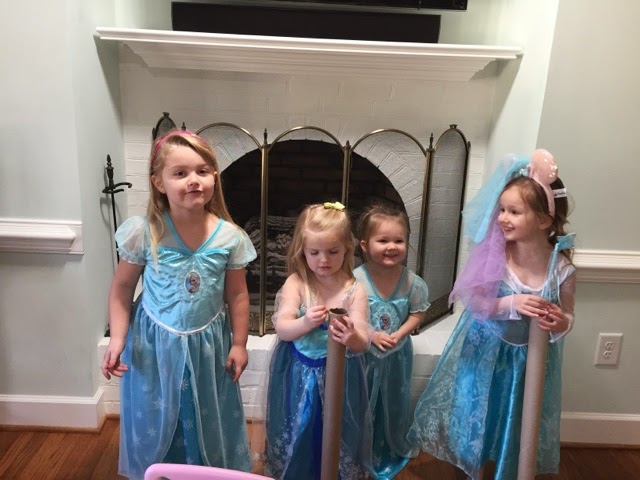 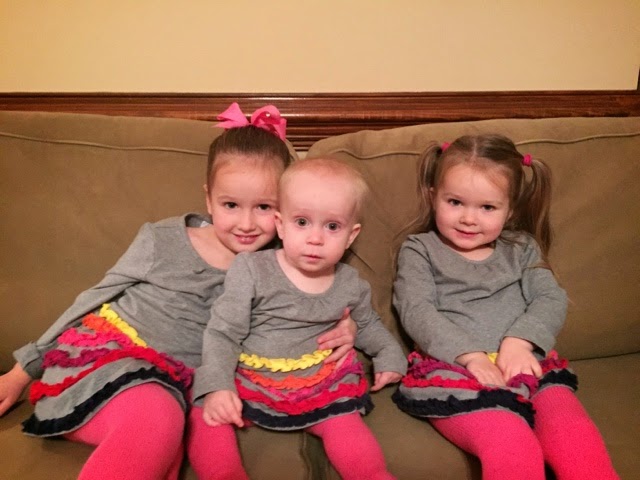 Overheard on the way there AFTER talking about how we needed to behave and use good manners...

So I was pretty much expecting to leave the party after 20ish minutes because I had no idea how we would fair. However we stayed for almost an hour and 20 minutes so that was awesome. R got to see her bestest little friend from school and they followed each other around an had to sit next to each other and eat the same food. It was cute!

Also I managed the playdate all the way to driving to the Christmas party solo because Lee had a bit of work to wrap up, hold pick up hours for a church fundraiser and preach/homilize (my word not his : ) Saturday night at the church here. I was satisfied with fact I didn't yell too much and the house was not a total WRECK when we did get home from the party. #winning

Then Sunday morning Lee and I headed to the garage at 5:30 to load up the coolers for the big distribution of kielbasa and pierogi (again, church fundraiser - oh the life of a mission parish). 150 lbs of homemade (yes that would be in MY home - but I have about 2% to do with the actually making of it) and 291 dozen potato and cheese pierogis later... we were set. My fingers were so numb at the end I blame any miscounting of pierogi on the cold (yeah, yeah offer it up I know).

Church was church. Nothing major to report.

We went to Trader Joes after (yes I cannot stand shopping on Sundays but we needed to kill time) and we walked out to find that M had opened one of the van doors (when I gave her the keys as we were walking in). THANK YOU KIND PEOPLE OF CARY FOR NOT STEALING MY PHONE!

Next stop, Grammy and Grandpa Joe's for Uncle Kevin's birthday... Homemade dumplings and made from scratch gingerbread cake - it was AWESOME 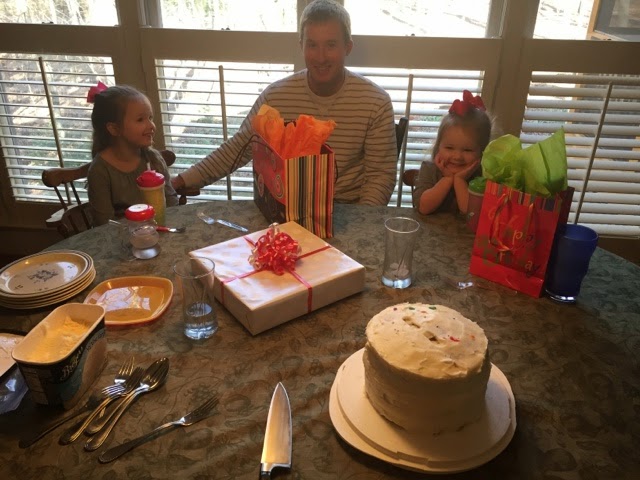 E was super concerned about the wax on the cake

Uncle Kev and R ate off each others plates and it looked something like this... 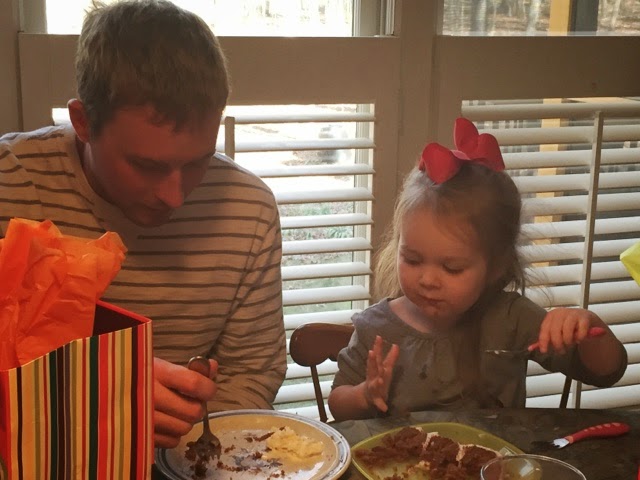 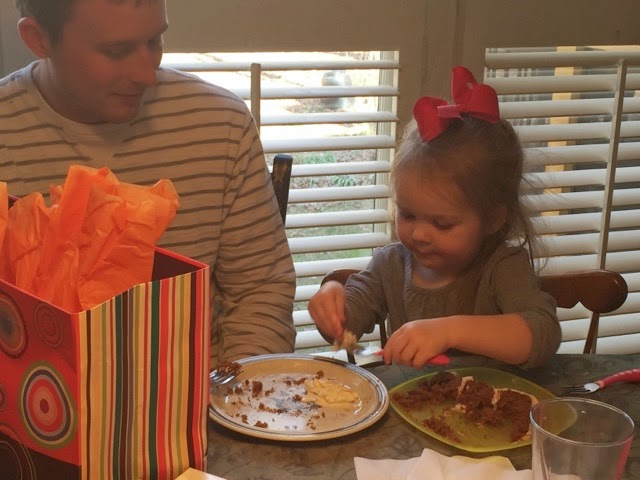 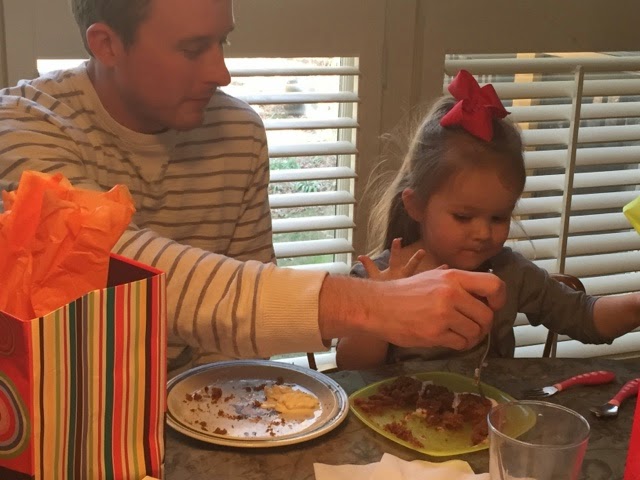 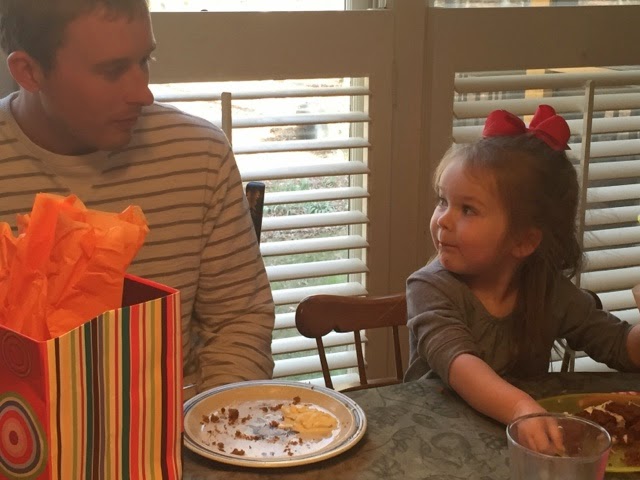 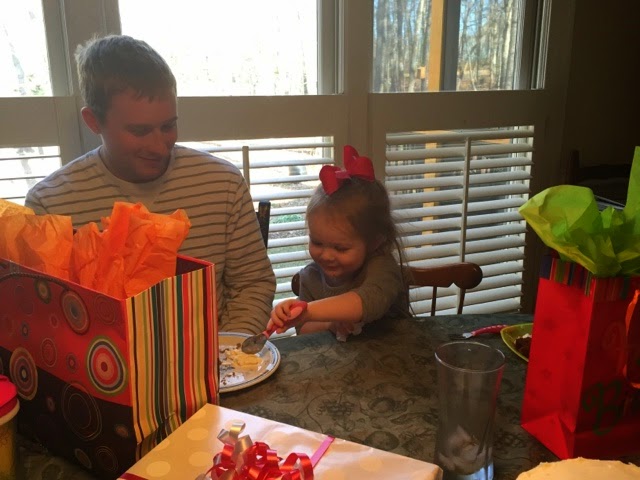 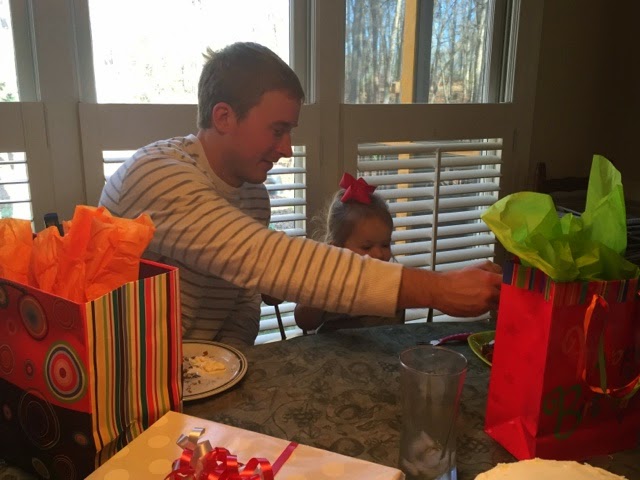 M is in this super cute stage of being very animated... 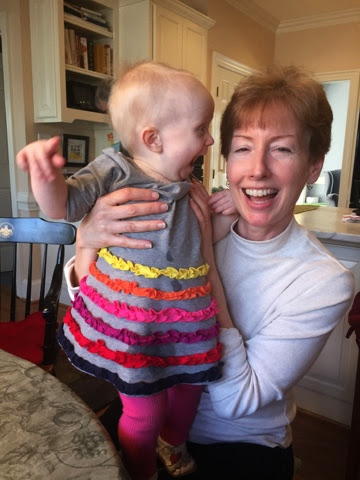 Are you tired yet because, yeah I was at that point... BUT then I dragged M to get shoes for Christmas (thanks Jibbe) and I knew I HAD to go before rest otherwise I wouldn't be able to at least try for Christmas card pics (more on that later) 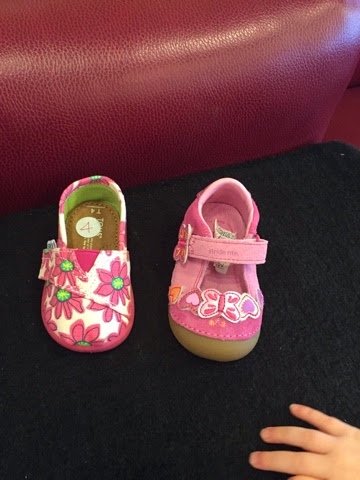 THEN... Yes there is more. I walked drove down to get some expert advice on finishing Papa's stocking and leaving it to get finished. See the cross stitching is only part of it... You have to get it backed or know someone who really likes you who will do it for it. Fortunately I know someone... and she's the reason I wanted to do cross stitched stockings in the first place. 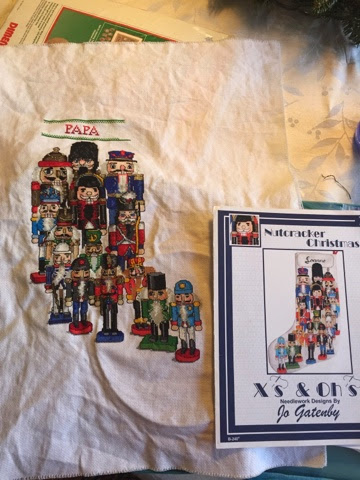 Also got to see a sweet little bebe who I could not hold because of my sniffles (grrrrr) and I didn't even get a pic because I was furiously stitching the top where the name... Anyways, it is always great to catch up with good friends especially ones like these : )

Then I raced back to Grammy's to get the Christmas card pic taken. We don't have a good place for taking them inside our house. Our couch is a weird greenish color and the fireplace is not the best for M and we didn't have poinsettias and Lee was bugging me (legitimately) about when are the Christmas cards going to be done (I like to send them about a week before Christmas). Well the stars aligned and I went for it.... Rapid fire. You get what you get. Let's get at least a decent one of each of them and if a group pic happens, great. If not then it'll be another card like last year. 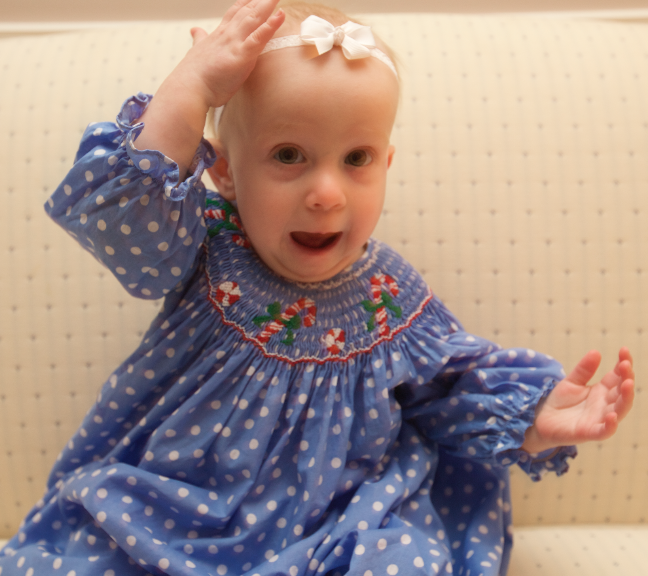 I won't spoil it for anyone but M did eventually realize that I snuck a bow band on her head... 10 minutes... 100 pics. I got what was needed.

Then back to dinner and harassing Grammy and Grandpa Joe's dog. Seriously, seriously. If I could tell you how much this dog does NOT appreciate the grandkids presence. M snuggled him and shared her bear with him and crawled around him and Grady just sat there. Annoyed as all get out. 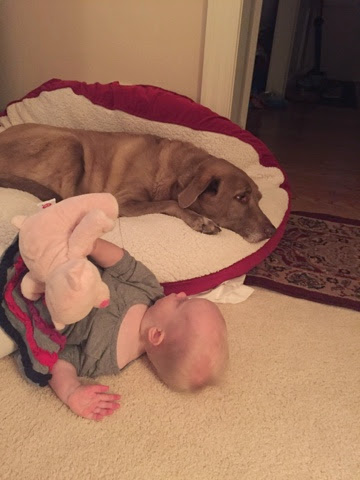 E could not convince Grandpa Joe to eat brussel sprouts at dinner (not lying, they are her favorite). M thinks everything is hilarious including putting asparagus on her head... 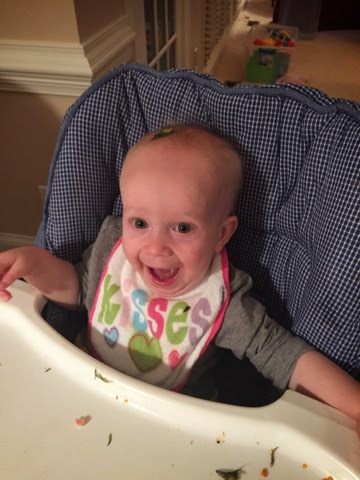 Grandpa Joe literally put out a small fire that had to do with the grill (Lee supervised) and we got pajamas on and headed back home. We left G&Gs kitchen like a tornado ran through - I think we managed to get the toys put away but for real... If/when (in the LONG distant future) we have grandkids and they come I solemnly promise to let them and our kids leave the house in the state we left G&Gs. Promise!

We got back home and in bed and I asked myself where'd my weekend go and now I can look back and see...
at December 15, 2014