Today was Wacky Clothes Day at the 2 yr old class. I was thrilled E played along because usually she has to be matching everything down to the rubber bands in her hair. But today she was pumped and definitely won the best dressed award at school 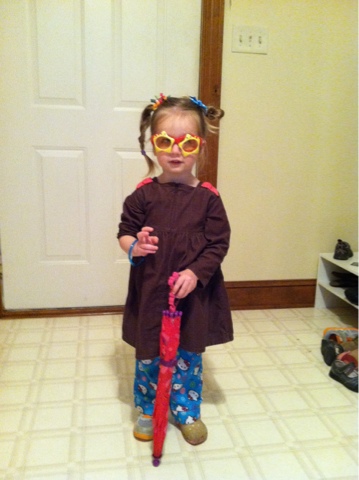 In addition to the backwards dress and Hello Kitty pajama pants. She had on mismatched socks which you cannot see. One Croc and a tennis shoe - which was a problem because it was raining and then she walked in a massive puddle and the Croc foot was not spared the drenched-ness. She has one bracelet and sunglasses - which I never let her take to school. One side braided and one side bunned with mismatched bows and rubber bands. She was way into it.

Though she was concerned R and I were not wearing Wacky clothes...   : ) R helped me take the pics : )

Also in Wacky non-so-clothes news... This morning before this pic was taken we were discussing icons  in the chapel - per the usual - E has been into the Good Samaritan and Myrrh Bearing Women ones in particular. R just likes to lick them and try and grab them off the wall - both of which I do not encourage. Though in my attempts to distract her from chapel destruction I gave her a little Ukrainian handcross and that almost ended up in my eye... ANYWAYS

Back to the story... This icon... The icon of the Dormition of the Mother of God aka the Assumption in the West - Mary is assumed into Heaven or falls asleep - NOT having a massive theological discussion here. 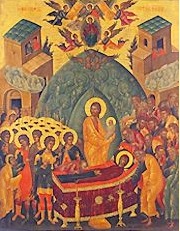 So try to explain to E that Mary falls asleep and goes to Jesus (she did not die) so I tried my best to avoid the word die you know. So blah blah blah. Somehow we get to the point that Mary was old.

Whoa why must we have such deep conversations before 8:15 in the morning little E - please don't forget you are only 2 and you are turning 3 - not 13!

Email ThisBlogThis!Share to TwitterShare to FacebookShare to Pinterest
Labels: preschool, wisdom of a toddler