So last night St. Nicholas did not stop at our house. Fortunately he has all day to make an appearance so I think he will during naptime today. E went to sleep for her nap saying Nik-las Nik-las. We dragged the basket of clothes and other assorted items into the chapel for St. Nicholas to take. E was super unhappy about parting with a pair of my shoes - but I told her St. Nicholas needed them. Pics of before and after to come! 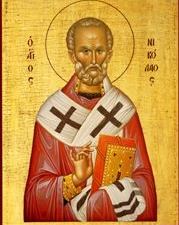 Addendum to why he did not come last night... I had a doc appt yesterday afternoon which they were running insanely behind for... Left there straight for church, got there late, then vespers lasted longer than I expected. I was supposed to go see Raleigh's new MAYOR get inaugurated but I would have been late for that and I was super tired. I wish Raleigh-world and the Mount were only 30 min apart instead of 1 hr. I definitely don't remember being this tired before! I have noticed I am not sleeping as well - which is kinda scary because I still have 9.5 weeks left to go! I feel like I need a caffeine drip!

Anyways, not trying to complain. Happily and health-ily preggo. Now for St. Nicholas to have some fun!
at December 06, 2011