R's School of Hard Knocks and other Things


R has been through A-L-O-T this past week.

She took a tumble down the stairs. Fortunately I caught her before she made a total crash landing on the hardwood floors. I seriously had my heart stop for a whole 5 minutes. R was shaken up - literally - but no worse for the wear.

Let's see she took a nosedive on the driveway and her knees were not spared BUT R got right up and kept running on.

Then among the regular bumpies and crashes, during her meltdown at church on Sunday she fell and scraped up her fingers to the point where she was uncontrollably freaking out. There definitely was a bit of blood involved...

Lastly, yesterday afternoon we were out on the swingset sliding and swinging  - the works. E decided to hop on her swing and do the belly swing without looking behind her and R just happened to be perfectly poised to take a foot to the chest and went airborne and well, the rest ended in two girls being in tears. R shook it off though and once she had a squeeze and her cup - she was good to go - straight to dinner of course!

In other news she is talking up a storm. I got her up from her nap yesterday and we were sitting in the rocker just talking. I asked her if she had a nice day and stuff and she was babbling on and I could have sworn she said be-tus and went on rambling about something. Because? You are too small to use such a big word!

She is also doing this super cute... "no, no, nooo" thing when she doesn't want to do something. She'll look you straight in the eye and run around and shake her head.

After breakfast this morning we were checking out the 17+ wild turkeys in the backyard and R made some cute attempts a turkey but could not quite eeek it out. Then I asked what a turkey says? {Blank stare - of course}. Gobble, gobble, gobble - I told her. Goggle, Goggle Goggle - with a super big grin. And then the turkeys were gone into the woods : ) 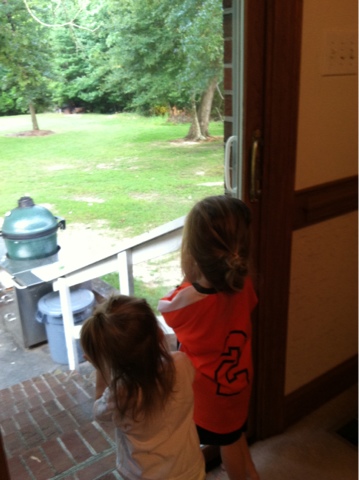