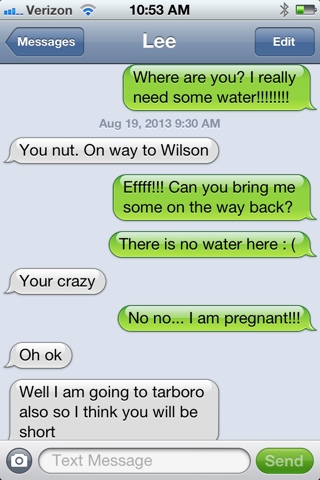 --- 2 ---
I have missed taking pics of the girls in the mornings... Seemed like I had more time when E was not lalligagging at the breakfast table and R did not sit on the potty for 5 minutes (sometimes successfully) in the mornings. 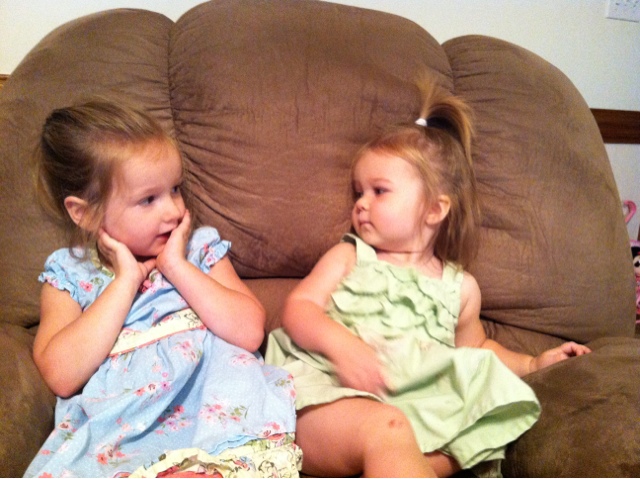 They adore each other. 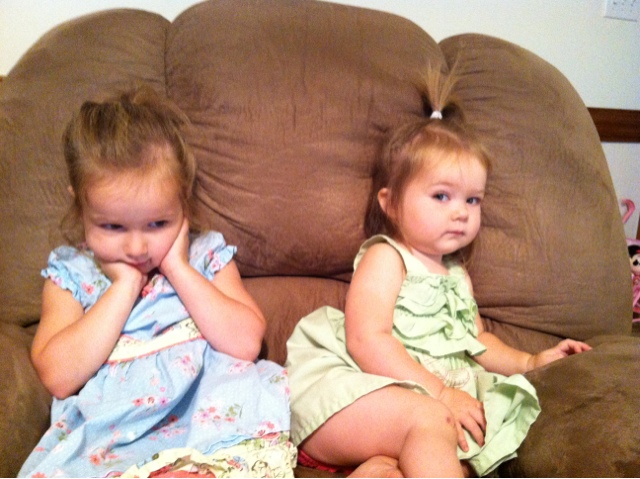 They are skeptical of me : )

--- 3 ---
R was left at home for a random trip to a baseball game courtesy of some people Lee works with. She was entertained by Jibbe so I am pretty sure she would have taken that over baseball any day of the week.

The Durham Bulls retired Chipper Jones' number that night so it was jam packed plus we had to drive three times as far compared to our regular team we patronize.


It was fun though. E demanded that I clap every time anyone else was clapping and she wanted peanuts the minute we sat down. 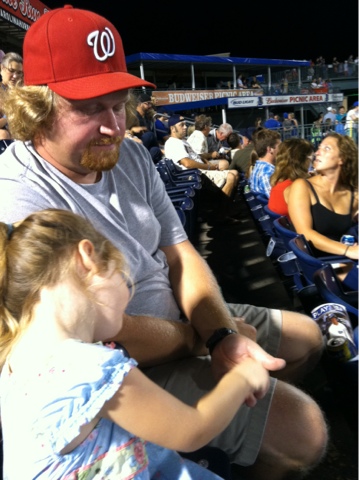 Probably one of my newest favorite pics.... snapped a few minutes before the rain started. It sprinkled - SPRINKLED people. and was does E do? Flip out!!!! She screams at the top of her lungs... "Let's get out of here" and goes into this frantic screaming fit. So I told her we could get ice cream "when it was 5" aka the 5th inning and the rain just happened to start then so.... after a quick visit to the potty (I HATE PUBLIC RESTROOMS!) we loaded up in the van and headed east-bound and down (right?) to Goodberry's. Ever since we had our ice cream outing Saturday, E has remarked that she thinks we need to go get ice cream EVERY NIGHT around dinner so she was thrilled about Goodberry's plus there was a fountain that changed colors and it was semi-raining-ish so she got to use her umbrella. She opted for some of my Mint Chocolate Chip concrete and NOT Papa's Raspberry and Chocolate concrete. I taught her well... or subjected her to my habits in utero... She dug into my tunafish lunch the other day so I have totally sealed her fate as a mint chocolate chip loving tunafish eating kid. Which means I have sealed my fate as a mama who has to open a can of stinky tuna fish at the crack-o-dawn to fulfill my kid's lunch request. I guess E and I have Grammy to thank for both of those : )

I wish I could snap a pic of this four wheeler so you could see a visual but alas it is not in the cards at it is in a 55 mph zone and I'm not even going to try and pull off taking a pic while driving because that sounds worse than texting and driving. 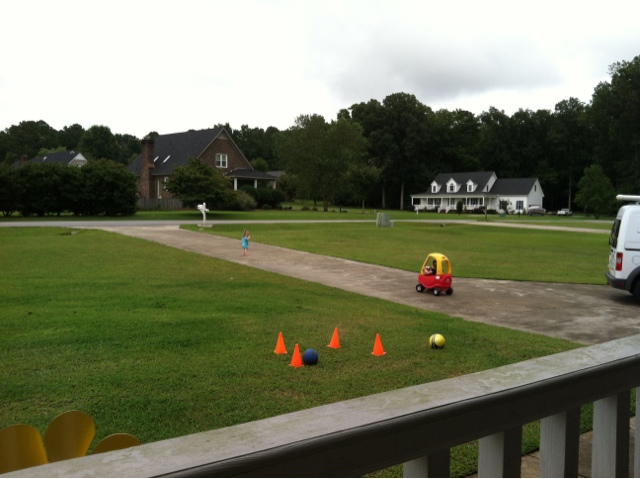 There are a few notable things going on in these pics.

1. E and R 'racing' down the driveway on their cycles. As soon as E got to the top, R would start zooming backwards as fast as possible but still never managed to get a W.

2. R think its hilarious that E is chasing her up the driveway in the little red car

3. E's abandoned attempt at 'being the coach' and instructing R on the fundamentals of 3 yr old soccer. R was more interested in picking up the cones and stacking them so needless to say her coaching career was short lived. 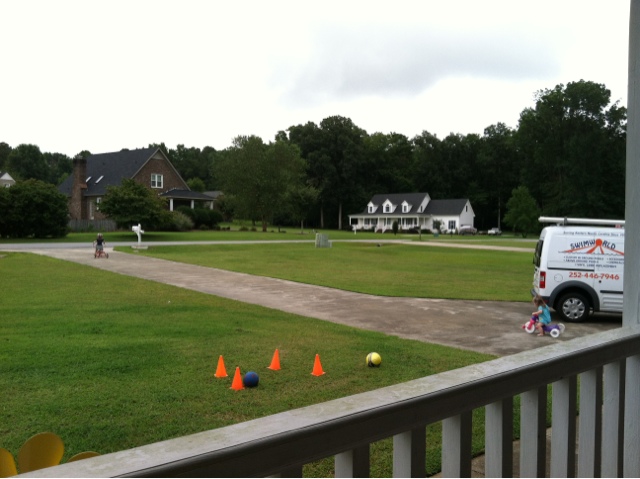 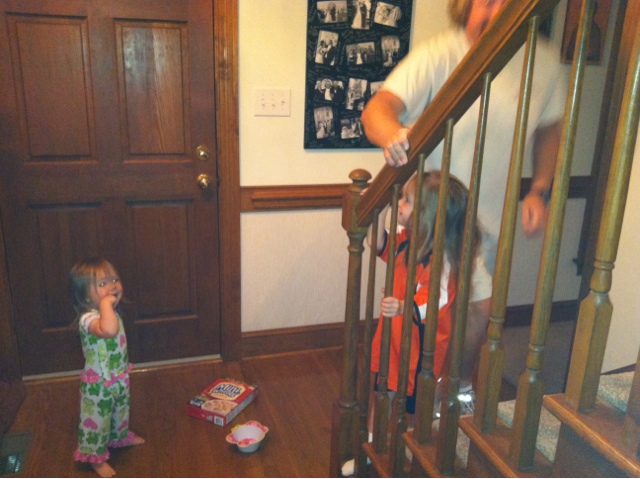 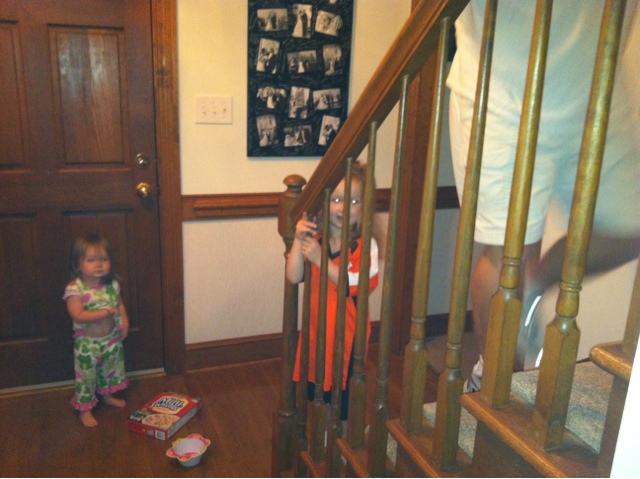 The girls cheering Papa on during his 5 minutes of dedicated physical activity for the week : ) Sorry Papa you totally had to get called out : ) Not that you don't 'do work outside' but your stair climbing time is really the only thing that counts in my book - outside of pushing the weighed down stroller up the hill on our walks - which you resist mostly, and cave occasionally.

--- 7 ---
Yeah... about those posts. I have got to crank out that 30 in 30 post... hmmm ASAP. Lee is getting the iMac updated so the monthly posts should be on the way. And I have been on a cross stitching kick / in denial that this baby is coming in less than 10 weeks... hence my blog absence! I'm sure Uncle Kevin will hold me to more posts though... negative ghostrider!

Email ThisBlogThis!Share to TwitterShare to FacebookShare to Pinterest
Labels: my morning in pics, outside with the kiddos, overheard, quick takes, the sisters