"Why Mama should have gotten a pooper scooper for her bday"


Since Papa was legitimately at a pool appointment I did not want to bother him with phone call so Nani was the one who got the first call reporting said incident. She thought it was just as ridiculous and hiliarous that I described in like cleaning up after a puppy (she had 3 and knows all about it : ) 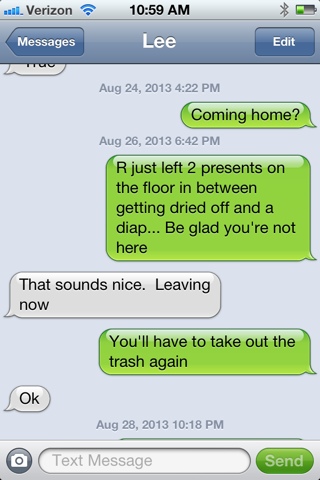 Lesson learned the 3 yr old playing in the tub peacefully can wait until the 18 month old gets properly diapered.

Lee always sounds sooo cool, calm and collected - something I try to do but seriously, seriously.

--- 2 ---
While we're on the topic of kids and cleaning up. E had an accident in her bed the night that Lee was out of town for work. Don't you love the... 'Mama, wet, I'm wet' call at 12:15. Fortunately she was not overly freaking out. But did request her Dr. Seuss sheets be put back on the bed. Changing the sheets was going to send me into labor though. Man it was highly unpleasant bending over the tiny toddler bed wedged against the wall... which is probably why I sent Lee this text... 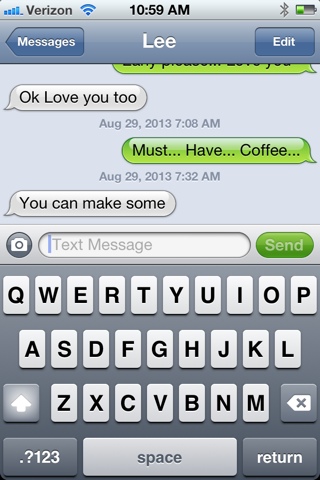 Lee is THE resident coffee maker and coffee maker cleaner outer... I mean. I don't make the coffee he does and if he's lucky I MIGHT clean the grounds out if I am not trying to do 100000000 other things in the day. That's like me taking out the trash... I just don't do it.

--- 3 ---
Oh and how about the wifey, kitty claws were flared for a second this week. Someone tagged Lee in a photo on FB and there was a comment (thought joking and innocent I am sure) that stated

"I hate knowing your blonde buddy there is married."

Ummm... hello! I wanted to comment. Yeah married with kid number three on the way, lady! But.... I didn't but I seriously wanted to.

FANTASTIC... Seriously kid, if you are a boy I will not let you out of my sight. I PROMISE!!! You will have some winning over to do though

Along that line, we had a girls dinner at the house the evening Lee was out of town. My amigas made Huevos Rancheros. If you have not had them, get them - because they are awesome. Anyways, they were questioning E about the brother/sister thing and this came up either with them or shortly after they left 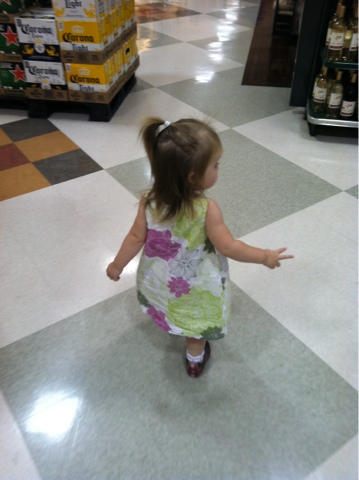 I had to take R to the pediatrician this week. Eye-roll. Gag. Please don't make me do this! I despise going to the pediatrician ESPECIALLY for check ups. Fortunately, it is not in the dead of cold and flu season and I had an early afternoon appt and Jibbe had E for the afternoon so it was just me and R.

We grabbed a banana, milk, squeezable fruit pack (which I NEVER buy) for lunch at the grocery store. It was awesome. She did not want to hold my hand in the parking lot because she wanted to walk herself but I insisted and won out - of course. Once up on the sidewalk she tooled around herself and followed me into the store stopping to wave and say "hiii" to whomever she could charm. When we got in the store she kind of just took off like she owed the place and I guided her around to our various stops. 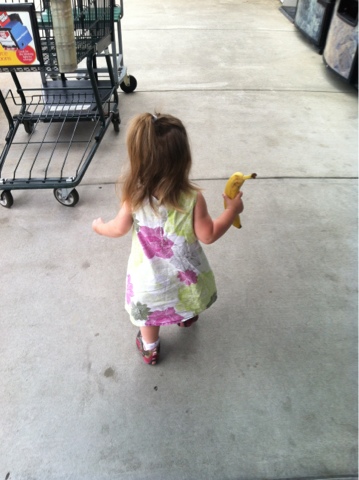 She insisted on carrying her 'nana' out to the car. She was so fun to watch and see her little personality. After a quick food fix in the car we headed to the peds office. She waved and screamed 'baby' to all the babies that were there. We waited in the waiting room. Then we got called. She was sooo big and stood up on the big stand up scale all by herself - E DID NOT do this until after she was 2. I have memories of that.

The nurse attempted to take her height with the stand up measuring stick which R was not crazy about and she ended up in the 9% percentile for height - down from about 30% last trip so I don't believe that was horribly accurate.

R - the skeptic - did not like having her head measured or her heart listened to. Then we were placed in our holding cell. My least favorite part of the doctor experience... EVER. I had books, and snacks and a cup for R to be entertained. I am halfway convinced the doctors and nurses are doing some sort of sanity study about what parents do with their kids in a 12x12 room with the door shut.

We read Clifford. Drank milk. R had Cherrios then dropped the container on the floor. She chewed on the chair. Took off her socks. Screamed a bit. Then after 30 minutes - YES THIRTY - minutes in the holding tank I go out to the nurses station with my patience being tested and ask if we'll be seen soon. Mind you this is the nurse that I walked out on before because I waited 50 minutes for a different time - so she and the doctor are aware of my policy/tolerance. She just nodded.

I left the door wide open so everyone could hear the disgust of R who was tired and frustrated.

Another 5 minutes and zoom in comes the apologetic doctor who said he was dealing with a sick patient and stuff. Fine. Fine Fine. I get it. But can't you at least tell me its going to be 35 minutes BEFORE I go get locked in my cell????

Anyway R skeptical. Got a good report. Survived her shot and that's all.

I still despise going to the pediatrician's office and I am not looking forward to picking up where R is leaving off with having to go EVERY 3 MONTHS with baby #3 but its a mom thing I guess. So I will suck it up and DEAL!

E got signed up for soccer this week. I cannot say that I am super disappointed she is not doing ballet because the 6 yr old little girls running around the dance studio in sports bras made me want to gag - sorry I don't see how that is appropriate but maybe I'm just old fashion. Maybe next year. I bet she'll do ballet camp over the summer again and I will sign her up for swim class for a month before the year is over - I promise. And I am trying to convince Papa to take R to parent-tot swim class too.

--- 7 ---
Lastly, in the car last night E thought it would be brilliant to chew on her baby's foot after eating an Oreo for dessert. Yes she is 3 and yes I still have to tell her to not put things in her mouth. Well she paid the price because the baby ended up with a wet, black foot.

Compounded by the fact that it was past 7:30 and she skipped rest because her cousin was at Jibbe's (see I am not that tyrannical). She MELTED DOWN. I assured her I would take care of it. I told her I'd put baby in the wash. SCREAMS. I told her I would take baby to the doctor. EVEN LOUDER. I got her vitamins. Brushed her teeth through tears. Plopped her on the potty with more screams and sent her to bed... without baby. She was asleep in minutes. Threw baby in the wash. Oreo came out. Baby rested on the dryer for the rest of the night (and morning) as my wash dried. And so did she. Crisis... semi-averted. Score one for the mama team. 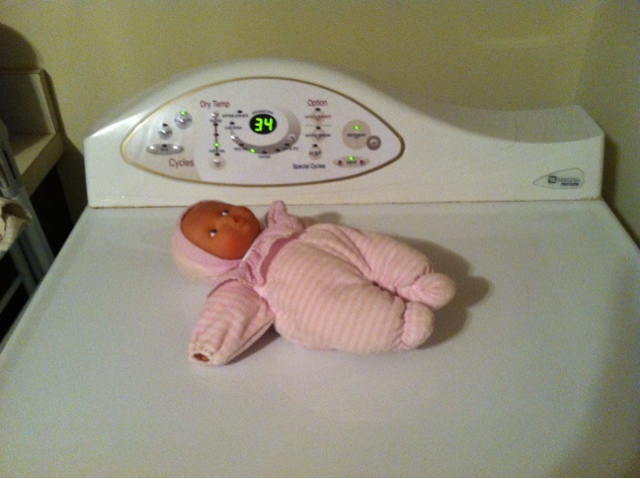